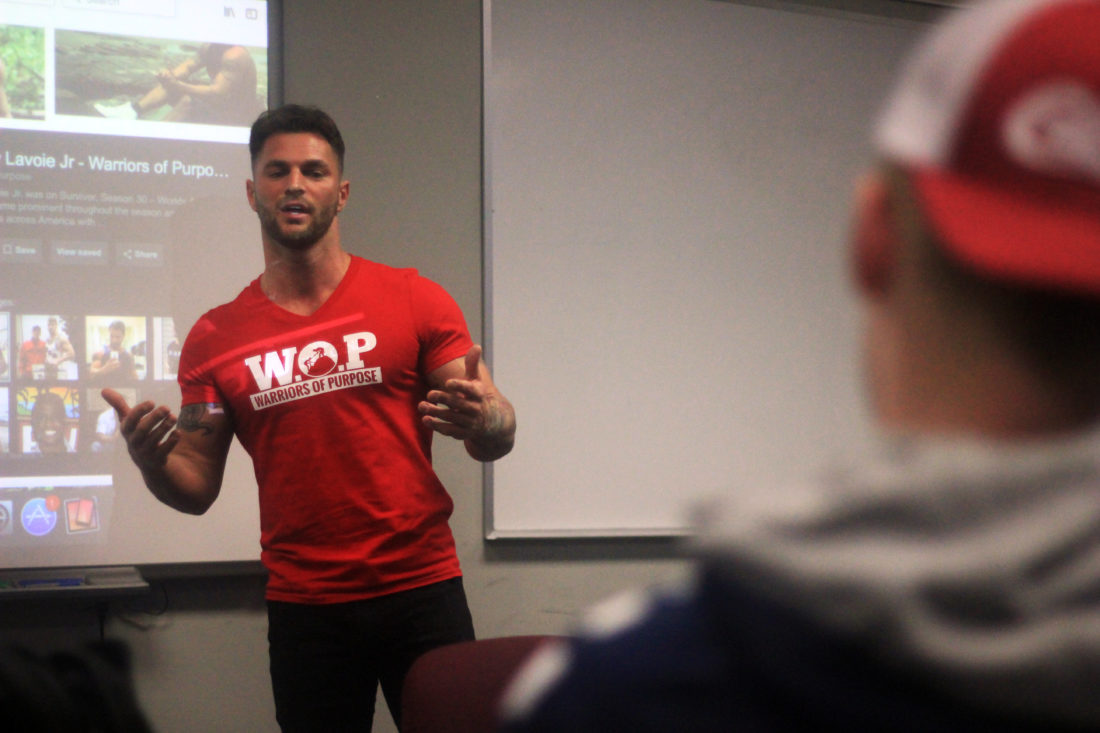 When future educators are learning about mental health and communication they memorize lists of statistics.

“These books are putting people down as numbers but they’re more than 1 in 50 or 1 in 100, they have lives, they have names like Erica and Leslie and Mitch and they have these experiences,” said Eric Klopfenstein, a 20-year-old student in Marietta College Education Professor Bill Bauer’s class. “It’s more than a number you recall for a quiz and forget.”

Klopfenstein felt a new inspiration and drive to aid and counsel children after hearing the story of Rodney Lavoie Jr., a former contestant on the reality show “Survivor” who has joined Bauer in a fight to educate and promote mental health and suicide prevention.

Lavoie appeared as a contestant in the 30th season of the show which was filmed in Cambodia in 2014 and aired in spring of 2015.

He spoke to three of Bauer’s classes Wednesday and then spent the evening talking with patients of Bauer’s private counseling practice all in the hopes of igniting a fire for good.

Bauer’s class had just discussed how different behaviors common to mental illnesses in children can manifest, and how communication with children is key to helping them.

“We’ve been talking about mental health issues, can you describe some of the symptoms?” he challenged his class before introducing Lavoie.

Klopfenstein explained a display of aggressive behavior, followed by blackouts and then embarrassment. Another student answered with signs of depression, and Bauer emphasized the need for communication throughout handling these behaviors in their students.

Then Bauer introduced Lavoie, who had personal experiences handling his own mental state to share.

“The No. 1 message that I have is that silence kills,” Lavoie explained. “When those times do happen and you’re feeling down and like you want to kill yourself, or drink or do drugs to take the pain away, to self-medicate, why not instead practice self-love?”

Lavoie’s sister passed away in 2010 due to complications from a drug overdose, as did his cousin, more recently.

“But I tried to keep that all in for too long when she died. I felt numb, then I went on ‘Survivor’ and didn’t talk about it. I came out with PTSD and six months after the show I had my first anxiety attack,” he said. “I thought I was dying.”

What followed was three months of depression and nightmares until, as Lavoie described it, he started practicing self-care.

“I had to get over my pride and talk with a psychiatrist, I had to take care of my mind and my body,” he told the class. “Create a routine for your life and if you are ever in pain reach out and talk with somebody you trust.”

He spoke of a need for a complete look at bullying in schools, to address both the mental health of the abuser and the abused.

“At the end of the day you don’t know what goes on behind closed doors,” said Lavoie, noting recent school shootings both in Florida and Maryland and asking what drove those students to shoot their classmates. “What’s going on at home with mom boozing, dad beating them, no one cares–no kid who is going through stuff at home wants to go to school and deal with the same crap there.”

Kelsey Hall, 19, of Marietta, was brought to tears after listening to Lavoie’s message because of a former classmate’s suicide.

“For (Lavoie) to talk about bullying and what’s going through a kid’s mind that drives them to suicide just hit me hard,” she explained. “I’ve seen a kid who has come to school with no socks and no food and lose education time just to get a bite to eat. I want to be the person in the classroom so that these kids know someone loves them.”

She said recalling interactions with someone who took their own life is painful because there’s the ever-present question of which interaction might have been the last straw. Maybe it was something from swim practice, she said she would speculate.

“He was swimming in my lane and I keep asking myself if I had just said ‘hi’ and asked how he was doing (if it would have changed anything),” Hall added.

Garrett Davis, 21, of Marietta, said he was also touched by Lavoie’s words Wednesday.

“Being from a small town you don’t get as much exposure to the bigger stuff,” he said. “This really opened my eyes to what other kids may be going through at home.”

Bauer and Lavoie hope to continue that exposure to groups and schools throughout Ohio and West Virginia in the coming months, with events in the planning stages to raise awareness about mental health issues and suicide prevention.

“Rodney is one of the few reality stars that does more than just get another TV contract and a nice car,” said Bauer. “He’s taken an actual platform to do some good. And through his nonprofit, ‘Warriors of Purpose’ he’s actually sponsoring and helping people.”

Bauer said in honor of not only Lavoie’s sister who passed away but also Bauer’s son, Grant, who died in September 2014 from an apparent suicide, the upcoming spring tour could hopefully touch the lives of others and encourage self-care and mental health care in the area.

¯ The pair plan to tour Ohio and West Virginia to raise awareness of mental health issues and suicide prevention.

¯ Lavoie works as a motivational speaker, in memory of his sister Natalie, who passed away due to complications from drug abuse.