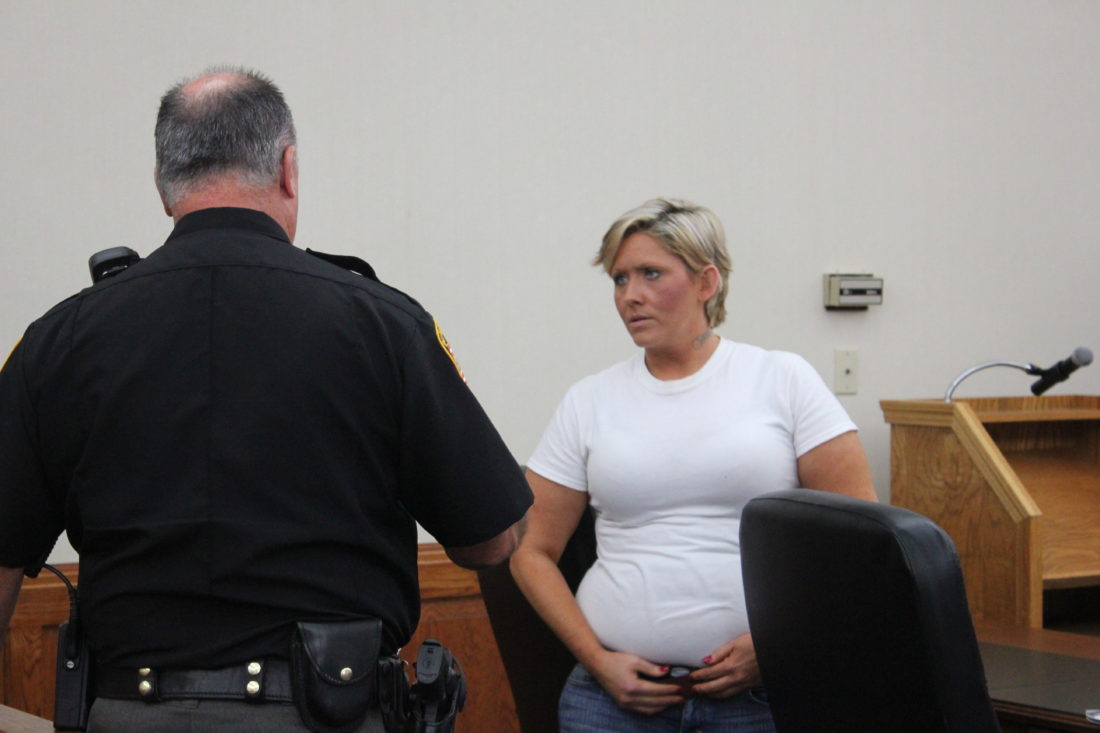 JANELLE PATTERSON The Marietta Times Stephanie Wright goes to remove her belt from her pants before being taken into the custody of the Washington County Sheriff’s Office for transport to the county jail Monday after sentencing.

Stephanie Larraine Wright, 34, whose last known address was 700 Cisler Drive, Marietta, was sentenced to 60 days in jail and rehabilitation through the STAR Community Justice Center in Franklin Furnace on or about Oct. 15.

Wright’s co-defendant, Nicole J. Dotson, 31, of 6488 Old St. Mary’s Pike, Parkersburg, remains at large with a warrant out for her arrest, according to the Washington County Prosecutor’s Office.

Wright had previously pleaded guilty on July 5 to trafficking methamphetamine, a fourth-degree felony.

“We would ask for rehabilitation through the STAR program,” noted Wright’s attorney, Ray Smith.

But when Washington County Common Pleas Judge Mark Kerenyi asked Wright if she was an addict, she said no.

“It’s just to support myself,” Wright explained of the trafficking of drugs.

When Wright was arrested on Aug. 3, 2017, she and Dotson were found with 6.01 grams of methamphetamine packaged in four separate 1-inch by 1-inch plastic bags, 0.38 grams of heroin in similar bags, digital scales, smoking pipes, additional plastic bags, aluminum foil and $468 in cash along with other drug use paraphernalia, according to the Major Crimes Task Force, which executed the search warrant.

On Monday, the judge ordered the forfeiture of the cash and a few cell phones confiscated during the search after reviewing Wright’s record Monday dating back to when she was a juvenile and noting a “moderate risk of reoffending.”

Wright said in the courtroom she had not done any drugs in at least six months, and looked healthier than in her previous mug shots.

“But I think you do have an addiction problem you’re not acknowledging,” noted Kerenyi as he sentenced Wright to the STAR rehab program.

“They have many options and tracks to take which include training for employment.”

Kerenyi also credited Wright with 11 days of jail-time credit for incarceration prior to sentencing.