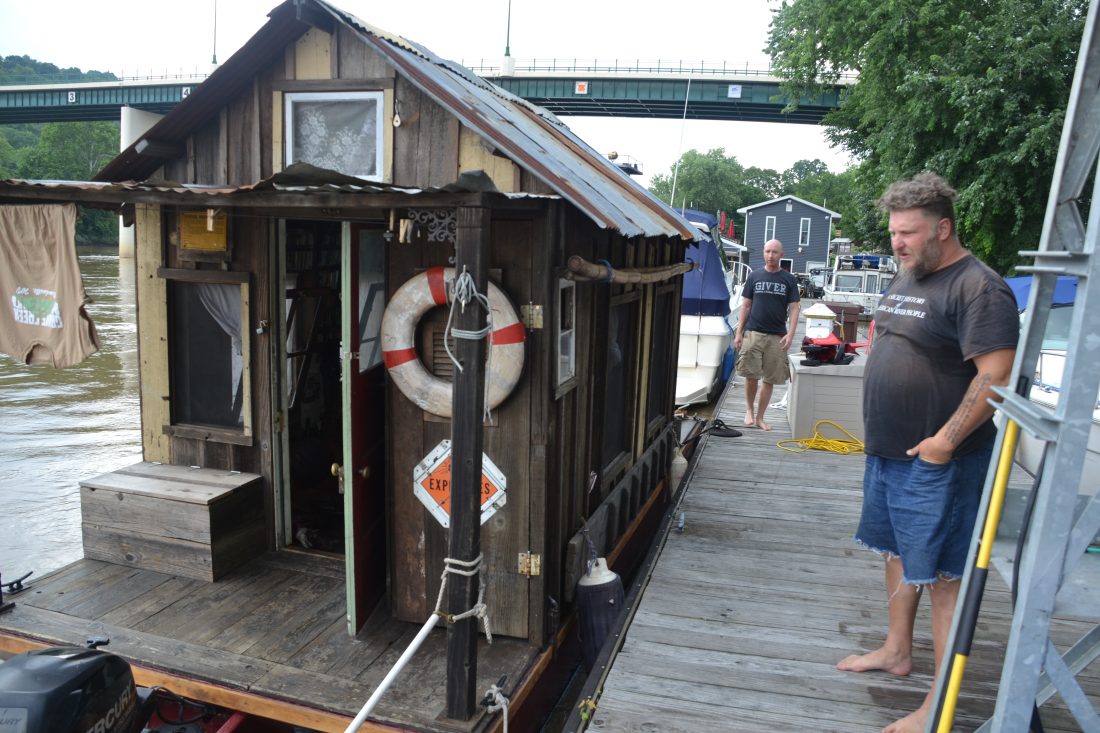 Photo by Michael Kelly Wes Modes and his traveling companion Adrian Nankivell stand on the dock next to the Dotty, the shantyboat they are traveling in down the Ohio River to Louisville. Modes has spent summers for years cruising the great rivers of America, compiling stories, images and information for his documentary project, "A Secret History of the American River People."

The shantyboat Dotty answers its description exactly: it’s a small house on a hull.

The Dotty, named for the grandmother of artist Wes Modes, is also a platform for rediscovering the history of people who lived by rivers in America. Modes, a California school teacher, is also the lead artist on a multi-year, wide ranging study in art and culture, “A Secret History of the American River People.”

On Friday afternoon, the Dotty was tied up just downstream from the Valley Gem under the Washington Street Bridge. Although it was hot and humid on Front Street, a breeze blew off the river through the cabin as the current of the Muskingum River gently and irregularly rocked the boat.

Modes said he and his shipmate for the summer voyage, New Zealander Adrian Nankivell, set the Dotty in the Allegheny River eight miles north of Pittsburgh on June 25 and headed downriver with the other ship’s companion, Hazel, a very relaxed mixed breed dog. They arrived in Marietta on Wednesday.

It’s the sixth year that Modes has drifted down a big river during the summer, gauging the attitude of communities toward their rivers and collecting stories of the residents, their memories of how previous generations regarded their rivers, and adding to the compiled history of shantyboats and river people.

“It’s inexplicable in a way,” Modes said. “Some towns really get excited when they hear we’re coming, you sense some recognition there. I’ve talked to people who say, ‘Yeah, I remember there used to be hundreds of shantyboats here.’ Others, maybe they don’t have that knowledge. We do our best to connect with folks, and sometimes we get stories that add to the history, sometimes we just become more aware of the gaps in it.”

Modes said they stopped in Moundsville and Sistersville on the way down the Ohio.

“It was fun at Moundsville, the people were super-welcoming. We’re enjoying these little towns, very much still oriented to the river,” he said.

The shantyboats for decades in the19th and 20th centuries were homes for working class and poor people along the great rivers across the country. Modes is attempting to rescue as much of their history as he can through documentation, photography, video and audio interviews with people, combining art with research.

His vision of history goes against the flood of accepted historic benchmarks set by prominent leaders, wars and the actions of the famed and influential.

“We’re challenging that version of history, the one marked by the great conflicts. Is that history, or is history the memory of your grandparents living on shantyboats? It’s history you can read set against the history of how people lived in your community, especially those who were poor,” he said. “That’s the kind of history I find exciting.”

Later in the day, as First Fridays crowds began filling the downtown streets of Marietta, Modes and Nankivell moved the Dotty down to Marietta Harbor by the Putnam Bridge and people began to wander down the gangway to the modern floating historic curiosity.

Dawk and Kristi Hollister of Marietta said they like history and were drawn by the shantyboat’s connection to that.

“I had no clue there even was such a thing,” Dawk Hollister said. “That is a different kind of lifestyle, for sure. I like riverboat history and went to the Ohio River Museum a couple years ago to see the Mark Twain re-enactment.”

Sara Rosenstock helped Modes coordinate the visit through JustAjar Design Press and took her children, Bayla, 3 and Elle, 6, down to see the Dotty.

“It is so cool to be in that space, gathering that storytelling,” she said. “I knew a tiny bit about it before this, from the exhibit at the Ohio River Museum. It makes you realize that the river at one time was just thick with boats like that.”

Rebecca Phillips, of Marietta, said she is a history buff.

“I love stories. I had heard the term shantyboat but never actually seen one,” she said. “It must have been a hard life, but an interesting life, one that demanded a lot of skills.”

More information on A Secret History of American River People, along with photos and videos the project has made, is available at peoplesriverhistory.us.

A Secret History of the American River People

• Multi-year artistic and documentary project to highlight the cultural history of people who live by big rivers.

• The shantyboat Dotty is the main piece of field equipment, used for voyages in summers since 2014 on rivers ranging from the Santa Cruz in California to the upper Mississippi.

• This year’s voyage is the Ohio, from Pittsburgh to Louisville.

• The two-person crew on the Dotty uses the boat as an exhibit at its stops and invites people to visit and tell their stories.