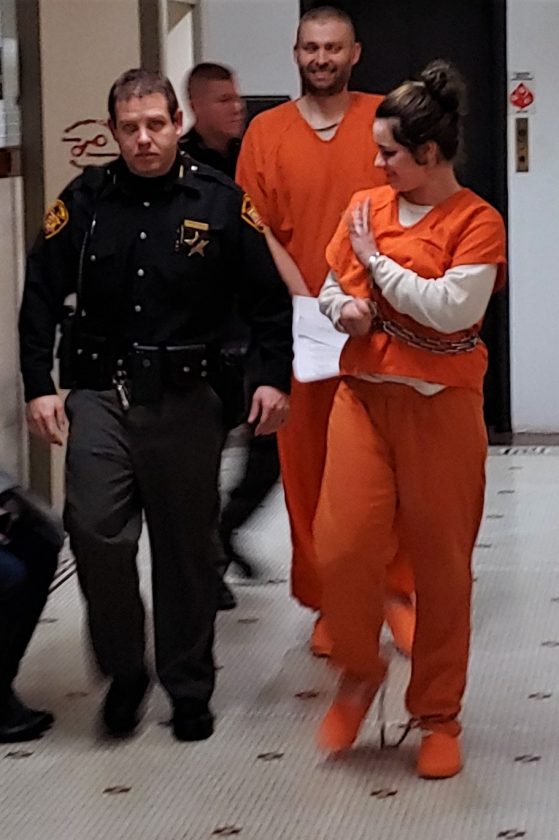 The third of six co-defendants in a violent home invasion in Mew Matamoras was sentenced to two years in prison Friday.

Once inside the home, Chaffin told Slider and Decker that a gun safe she was trying to open required a key. Slider and Decker then allegedly began pistol whipping McFall until he produced the key for the safe, which Chaffin used to remove five guns for the group to steal. The group also stole cash and a cell phone before leaving. They were later joined by Brittany L. McIntyre, 25, of 202 Edgelawn St., Parkersburg, to help clean up evidence of the crime. The group then transferred the stolen items to Clark E. Westbrook, 32, address unknown, for money. After the robbery and beating, McFall was hospitalized with a fractured skull.

Before her sentencing Friday, Chaffin spoke briefly to the court.

“I just want you to know how sorry I am. I feel bad about what happened to Mr. McFall. I know I did wrong,” she said.

David Silwani, Washington County assistant prosecutor, said a statement had been turned in by McFall, but the victim didn’t want it read in court.

Kerenyi sentenced Chaffin to two years for the tampering count and one year for the theft count to be served concurrently, giving Chaffin a total of two years in prison. She had faced a maximum of six and a half years.

Clark Westbrook is charged with a fourth-degree felony count of tampering with evidence and the first-degree misdemeanor of receiving stolen property. He is slated to appear for trial on April 22 at 9 a.m.

On Feb. 26, Ahart pleaded guilty to a second-degree felony count of burglary and was sentenced to four years in prison and three years post release control.

McIntyre was sentenced on March 26 and received 30 days in the Washington County jail and two years community control. She pleaded guilty to a third-degree felony count of tampering with evidence.

•Gabriella Chaffin was sentenced Friday to two years in prison for her role in a November New Matamoras home invasion.

•Joseph Slider and John Decker are still facing multiple felony counts that include attempted murder. They will be co-defendants in a trial set for May 14.

•Clark Westbrook’s trial for a fourth-degree felony count of tampering with evidence is scheduled for April 22.