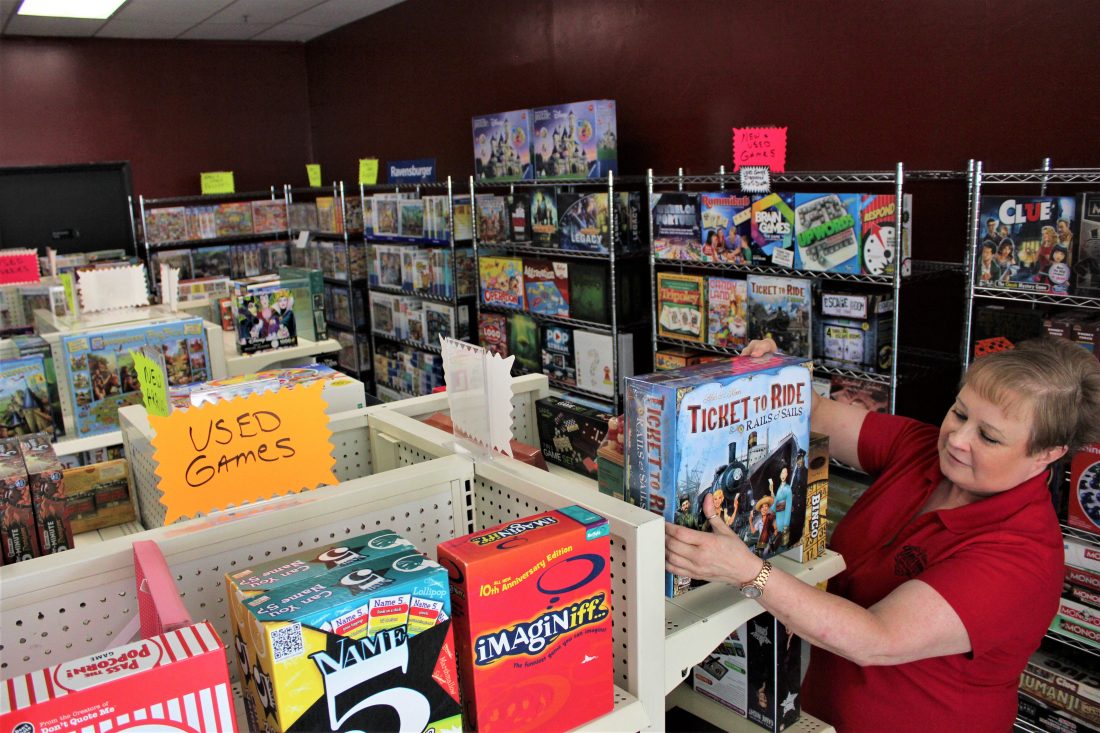 JANELLE PATTERSON The Marietta Times Penny Moore places a used game on the shelf in her new Putnam Street business Tabletop Puzzles and Games in Marietta.

Gathering family and friends around a table for fun, laughter and quality interaction–that’s the goal of a new shop owner in downtown Marietta.

“It’s all about unplugging and getting together to enjoy a good old table game night,” said Penny Moore, of Vienna, who opened Tabletop Puzzles and Games on Putnam Street April 5, and has a grand opening planned for May 3.

Moore said she’s retired, but grew up in Marietta and went to school in town.

“And I wanted to do something fun here,” she said. “So I thought why not games? You get home from a stressful day at work or school and it just brings people together.”

The shop boasts an expansive window across the street from the Washington County Courthouse, at 206 Putnam St. where even before she opened, she said, eager peepers pressed up against the glass.

“They had their eyes cupped and were looking inside as I was getting the shop ready and would come to the door asking when I’d be opening,” Moore laughed.

And since opening, she’s brightened the day of many.

“I had one gentleman come in and pace back and forth, frantic because I had Gloomhaven–and that’s an expensive game,” she described. “Finally after pacing for a while, he grabs it and says he just has to have it, he was waitlisted for it somewhere else… I tell you, he walked down the street carrying that box like it was a baby.”

Katsuko Garvin, of Kat’s Salon next door, said she is also excited to have Moore in the building.

“It’s been about two years since we’ve had someone here,” she said. “And to have someone so nice as Penny is wonderful.”

The two have become friends already, spouting ideas for travel together Wednesday as they closed their shops.

“But I’m also going to be involved in the Marietta Main Street events like First Fridays and stay open until 9 p.m. on those nights and during other downtown events,” Moore said. “On those nights we’ll have free gameplay and game demos because some of these higher end role-playing games can get expensive and if you hadn’t played before and loved it why would you spend the money?”

Top dollar games like versions of Settlers of Catan, Dungeons and Dragons and themed trivia games can run between $59 and $99 she said, but she balances those prices with used games she has in store as well.

“The used games can run between $5.99 and $19.99,” she said, noting the condition of the games and pieces are taken into account. “And if someone needs a piece for a game I can order the things they need, too.”

She also has different puzzles on the shelves including escape room puzzles which fit together in multiple ways to complete the written journey.

“And I have this whole area in the window for kids’ games,” Moore pointed out as she stepped up on the separate ledge. “There are educational games, children’s puzzles, travel games, all kinds of Uno and Skip-Bo options–there’s really something for everyone.”

And she said those who stop in to browse should be sure to look inside the glass shelf for a Marietta-centered game that while not for sale will be featured on the shop’s Facebook page.

“We might have special play nights with the game, but I’ve only been able to find two copies of it, so I want to be careful with the pieces,” she said.