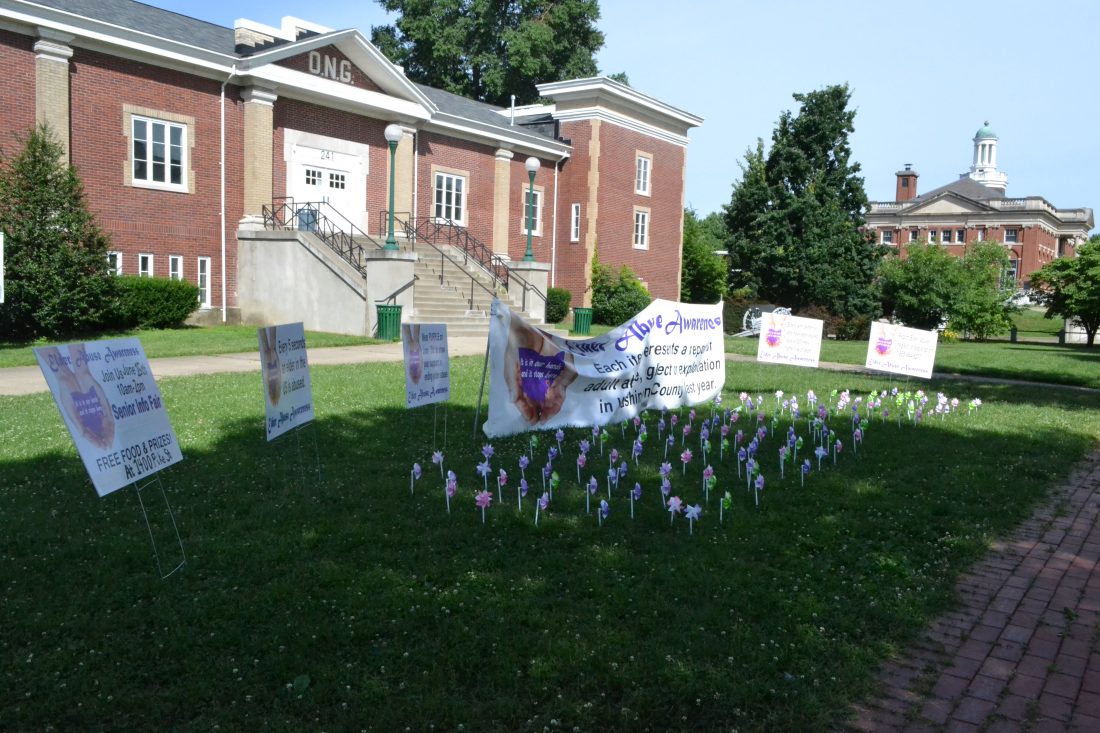 MICHELE NEWBANKS The Marietta Times Signs and pinwheels were placed on the lawn at Armory Square in Marietta in commemoration of World Elder Abuse Awareness Day, held annually on June 15.

The statistics are frightening when it comes to elder abuse.

Every five seconds, an elder is abused in the U.S. Approximately 1 in 10 American elderly persons have experienced some form of elder abuse.

Those types of numbers are why the Washington County Elder Abuse Awareness Coalition will hold a senior information fair on Saturday, which is World Elder Abuse Day.

The event, called the Washington County Elder Abuse Awareness Day, will be held from 10 a.m. to 2 p.m. at the Buckeye Hills Regional Council offices at 1400 Pike St., Marietta.

The fair will provide education for seniors and a quarter auction, as well as activities for their families. Proceeds from the auction will benefit Compassionate Animal Resources for the Elderly. CARE helps the elderly keep their companion pets in their homes.

“It’s imporant to learn what is and isn’t acceptable behavior,” she said.

She said elder abuse is very under-reported and getting people to recognize it is important.

“I think that to get to the point of stopping it is recognizing the signs,” she said.

There are many types of elder abuse, including physical, emotional, sexual, elder neglect and financial exploitation.

“I would say a lot of the time, it is similar to other types of abuse,” Westfall said. “There are unexplained bruises. With financial exploitation, there could be odd withdrawals from their accounts.”

She said elder abuse wasn’t something that was discussed several years ago, but now it’s important as the senior population continues to grow.

“Talking about it is important so folks can report it and most importantly, protect folks from this abuse,” she said.

Signs went up this week on the lawn at Armory Square in Marietta to show some of the statistics for elder abuse. Along with signs, there are dozens of pinwheels, each representing a report of adult abuse, neglect or exploitation in Washington County last year.

Flite Freimann, executive director of Washington County Job and Family Services, said Adult Protective Service’s responsibility is to investigate claims of abuse. He said there were 424 calls to APS last year and 128 of those became open investigations.

He said thankfully, only seven of those investigations were filed for guardianships.

He said in those cases, the seniors have medical issues such as Alzheimer’s or dementia.

A vast majority of the physical and emotional abuse cases his office sees “come from the desire to steal the senior’s money,” Freimann said. “The abuse we see the most of is financial exploitation. It’s a gross simplification, but ‘if you don’t give me money, I won’t help you.'”

He said it may be a caregiver, a family member, a neighbor or even someone they met online, but the senior is exploited by someone who takes funds from them. Sometimes it is because the senior isn’t aware of what’s going on, but other times it may be through coercion.

“Give me the money or else,” Freimann explained.

Washington County has a large senior population, with 19 percent of the residents being age 60 or older. They want to age where they live, but “individuals see those people as easy marks,” he said.

One of the biggest problem the APS faces is that the senior is afraid to report the abuse.

“People are afraid to report it because they are afraid they will have their freedoms taken away,” he added. “If a senior has all of her resources taken away and she’s forced to live in a nursing home at the government’s expense, that affects everyone.”

This event is aimed at raising awareness so the senior feels comfortable enough to report any abuse.

“That’s the first goal,” Freimann said. “The second portion is outreach. We partner with Peoples Bank to help family members or caregivers identify signs of abuse and exploitation. Make sure folks know this is a real concern and something they should know about.”

He said elder abuse is a serious issue and a serious concern. He’s heard stories that are truly heartbreaking.

“Someone has worked hard their whole life and they trust people,” he said. “They literally take every penny that they have.”

But physical abuse and financial exploitation aren’t the only abuses that face seniors.

Self-neglect can also be an abuse.

“Seniors stop taking care of themselves, giving resources they have to others,” Freimann said. “They are living on Social Security and giving away all of their money. This isn’t the same as exploitation.”

He said a second form of self-neglect is the individual who feels no need to take care of themselves or their household. They may be living in isolation with limited mobility or limited funds. This may stem from what Freimann calls “situational depression.”

The third form of self-neglect is when a life partner, spouse or close sibling passes and the senior stops taking care of themselves.

What can help in all three cases is the senior getting out of the house, whether they are going to a senior center, to church or to a senior event such as Saturday’s fair.

“They need interactions, a reason to get out of the house,” Freimann said. “Having something on the calendar to look forward to, knowing that someone is coming and they want their house to look nice. Social interactions are the key to help seniors minimize self-neglect.”

• Every five seconds, an elderly person in the U.S. is abused.

• Elders with dementia who have been abused have a 300 times higher risk of death.

• Approximately 1 in 10 Americans aged 60+ have experienced some form of elder abuse.

• It is estimated that only 1 in 14 cases of abuse are reported to authorities.

• In almost 60 percent of elder abuse and neglect incidents, the perpetrator is a family member. Two-thirds of perpetrators are adult children or spouses.