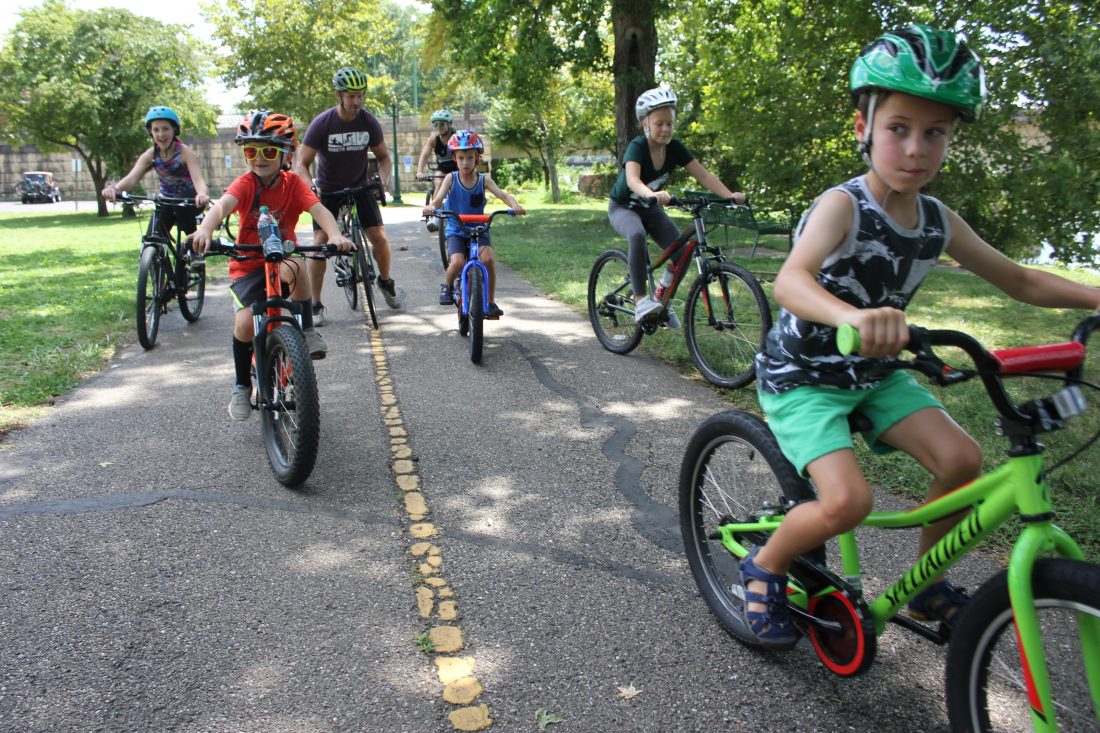 Photo by Janelle Patterson Cohen Pickens, right, and Trystan Lanham, left, lead the pack of the Family Fun Ride out of East Muskingum Park along the River Trail Friday at RTA Fest.

With clear skies and warm temperatures, families set off on adventures Friday by both land and river.

“Even with a little bit of H2O last night, today’s numbers are still good,” said Eric Dowler, festival director for the 9th Annual Rivers, Trails and Ales Festival. “Very popular today were the hiking and trail rides, and we’re expecting double the numbers from last year for [Saturday’s] beer fest.”

Bright and early Saturday morning offerings range from yoga at the festival headquarters in East Muskingum Park, to a lock thru-paddle from Lowell to Williamstown and later an evening of music, games and libations.

Dowler’s daughter Lizzie, 3, even had plans for Saturday’s festivities, dancing to the music performed by O-Y-O during the afternoon beer fest and participating in children’s crafts, games and riding course.

“She’ll be dancing with her cousins,” smiled Dowler.

Friday, other children set out on quests to find gnomes in the Kroger Wetlands, figure out scavenger hunt clues by bicycle, or beat their best friends, siblings, parents and cousins at an oversized game similar to Bananagrams at festival headquarters.

“The scavenger hunt was pretty cool,” said Megan Fluharty, of Marietta, as her family parked their bicycles in East Muskingum Park after their scavenger hunt. “I feel like I’ve been here for 11 years and still didn’t know a lot of those.”

Fluharty’s daughters Mia, 8, and Rowen, 6, were the first to get creative with not only their bicycling gear but subsequent word inspiration for the giant word games at the park, sponsored by The Marietta Times.

The sisters teamed up to spell not only “Mississippi” but also “Narwhal” and “Unicorn.”

Meanwhile, Cohen Pickens, 6, and Trystan Lanham, led the pack of the Family Fun Ride under the guidance of Nathan Pickens, of Washington, W.Va.

“I just love the community feel of Marietta, it’s so cool to get everyone together and to have a good time,” said Pickens, “Seeing all the kids get together and build that next generation of cycling is a great time.

Pickens is leading the big rides Saturday and Sunday.

“And we plan on being around for some of the other activities, too.”

After returning from the family ride with his mom, Lanham, 6, of Caldwell, weighed his options.

“I really want to finish that scavenger hunt,” he said before taking off again pedaling hard.

So whether you’re up for a hike, a beer, some guided time at Veto Lake, or just to be surrounded by others outside, Dowler said there’s a place for everyone this weekend.

“We put this on every year for the community and for the maintenance of these great assets we have,” he said. “And we’re so thankful to Peoples Bank and Peoples Insurance for being our platinum sponsor this year and leading that support.”