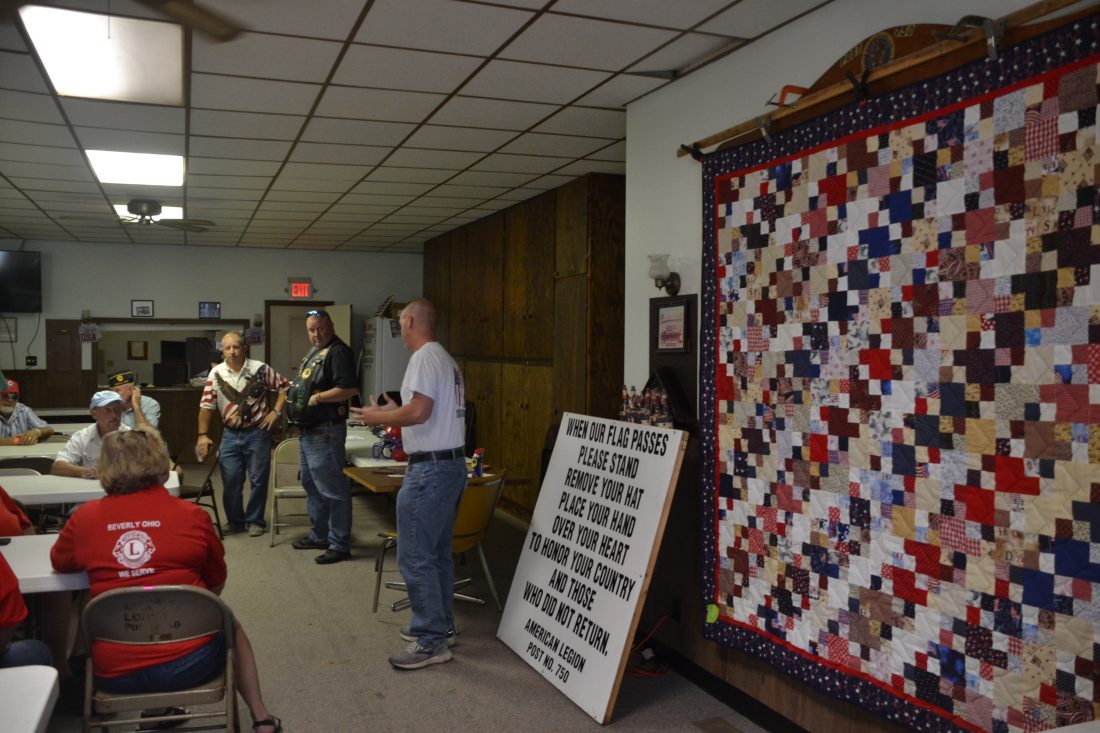 Photo by Michael Kelly An honor quilt hangs in the American Legion Post 750 as members and visitors discuss rebuilding the second-floor canteen of the post. The facility was broken into and vandalized Aug. 19, with damages estimated between $10,000 and $20,000. Groups and individuals on Thursday presented donations of more than $6,000 to help the post rebuild.

LOWELL — Donors came from around the area Thursday afternoon to present assistance to the American Legion Post 750 in Lowell in efforts to rebuild its canteen.

Cash contributions totaled more than $6,000, and the post is selling raffle tickets with a massive honor quilt as the prize. The money is needed to repair damage inflicted during a break-in Aug. 19, when $4,300 in cash was stolen from the safe and the thieves went on a binge of destruction in the second-floor room.

The Beverly Lions Club, the Beverly American Legion Post and the Beverly Legion Riders Club each contributed $500, and John McLaughlin on behalf of the Beverly Eagles Post 3665 presented a check for $5,000.

Post 750 member James Booth of Lowell had won a football helmet signed by the entire Fort Frye Cadets team of 2019 in a raffle and donated it back to the post.

“The Legion’s purpose is to give back,” Booth said. “This post is going to get redone, and it will be better than before.”

Bob Yoder, a post member for 40 years and now its service officer, pointed to a king-size, hand-stitched honor quilt hanging in the main floor hall. The quilt is being raffled for $2 a ticket.

“An 81-year-old woman made that quilt, Julie Farriman from Wellington,” he said. “She’s going to come down here for the drawing Oct. 19, and she’s going to pick the winning number.”

Yoder said the post had received many anonymous donations, and its group of staff and volunteers had put many hours into the clean-up.

“This isn’t just money, its an outcry of community support,” Booth said.

On Aug. 19, a thieves broke in through a second-floor window and took about $4,300 from the safe. They also trashed the second-floor canteen, breaking furniture and memorabilia, defacing surfaces with eggs, and creating a flood by plugging a toilet and leaving the water running, according to a report filed in a Marietta Municipal Court hearing.

The crimes were investigated by the Washington County Sheriff’s Office, and two juveniles and three adults were arrested in Lowell and Marietta. Law enforcement reports estimated the damage between $10,000 and $20,000.

Gary Ward made a donation Thursday, saying he and his wife, Karla, have a deeply personal interest in the post. Their son, Army Spec. Chris Ward, died in an accident on Fort Carson in June, Ward said.

“I’m really excited the community got together for this,” he said. “A lot of these people took Chris under their wing.”