From one cell to the next

Man released from Ohio prison heads to W.Va. for next sentence 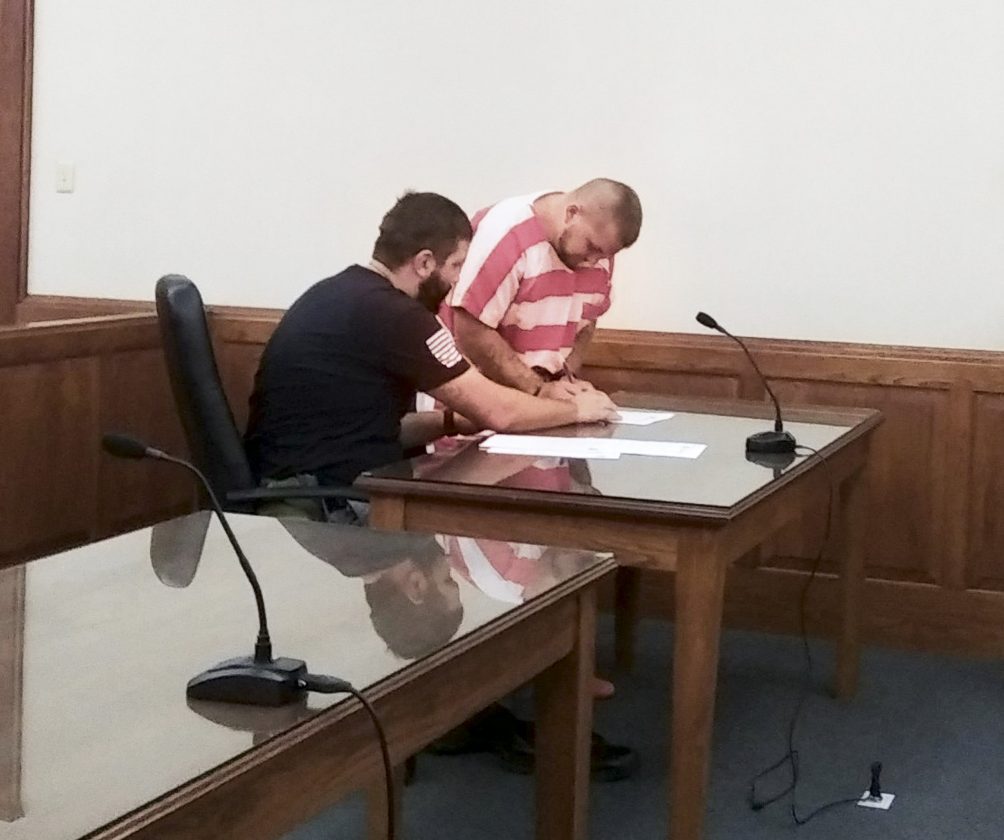 Photo by Michele Newbanks Calvin Riggs reviews his judicial release papers before being transferred to begin his prison sentence in West Virginia.

After four failed attempts to receive judicial release, a Coolville man arrested in 2013 and sentenced to 10 years in prison was set free Friday morning.

Only to immediately serve time in prison in West Virginia.

“Mr. Riggs, the only reason I’m letting you out of the Ohio prison is I know you are going to West Virginia prison,” Burnworth said.

Riggs was arrested in June 2013 after a string of burglaries that he committed with his wife, 31-year-old Misty Bennett-Riggs. In August 2013, he pleaded guilty to 10 counts of burglary, each a third-degree felony, and a second-degree felony of engaging in a pattern of corrupt activity.

He was sentenced in 2013 by Burnworth.

“Rest assured if I’m sitting here and you violate judicial release, I’ll send you back to prison to finish out the same years I gave you to begin with,” Burnworth told Riggs.

During their month-long crime spree, the two broke into at least 10 homes in the Cutler and Little Hocking areas.

The pair stole cash, jewelry and firearms, and stolen items were recovered in Washington and Athens counties in Ohio, and Mason and Jackson counties in West Virginia. When arrested, the two were wanted on burglary charges in Florida and West Virginia.

As part of the plea agreement, he was responsible for restitution to all 10 victims, a total of $4,531. He could have received a maximum of 38 years in prison. None of the victims attended his hearing.

Burnworth admonished Riggs, saying he won’t forget this case for the rest of his life.

“It was a horrible thing. The most compelling statement by one of the victims is you had taken their daughter’s jewelry box,” Burnworth said. “Their daughter had passed away and their treasures and memories of their daughter was in that jewelry box that you and your wife stole and threw in a ditch as you drove away.”

Burnworth stated that was the most compelling victim’s impact statement he’s heard in the time he served as judge.

“You deserved every day that you spent in this prison system and you earned every day you get in West Virginia as well,” he added.

Riggs’ wife was granted judicial release in June and is serving her prison sentence in West Virginia.

Burnworth wondered who was taking care of the couple’s children while they were incarcerated.

“How many kids you got?” Burnworth asked Riggs.

“Your wife’s mom got them?” Burnworth asked.

“Uh, no, she had them but she lost them due to, I guess, a drug problem,” Riggs said.

“Yeah. I’ve still got custody of one kid that’s with my first wife,” Riggs explained.

Burnworth noted that Riggs and his wife had received the same prison sentences.

“I certainly hope the time you spent changed your attitude and changed your approach to life,” he said. “And once you get out, you find a way to stay out the rest of your life.”

His West Virginia prison sentence dated back to March 2014, when he was indicted by the Jackson County grand jury on charges of burglary, grand larceny, destruction of property, and conspiracy to commit a felony.

According to a commitment order provided by the Jackson County Circuit Clerk’s office, Riggs pleaded guilty in August 2014 to one count of conspiracy to commit a felony, two counts of breaking and entering, and one count of attempting to commit a felony. For the first count, he will serve 1-5 years, the second and third counts are 1-15 years each, and the fourth count is 1-3 years. The sentences are to run concurrently to each other and consecutively to his current Ohio sentence.

When he has served his time in West Virginia, he will have a mandatory three years of post-release control in Ohio.