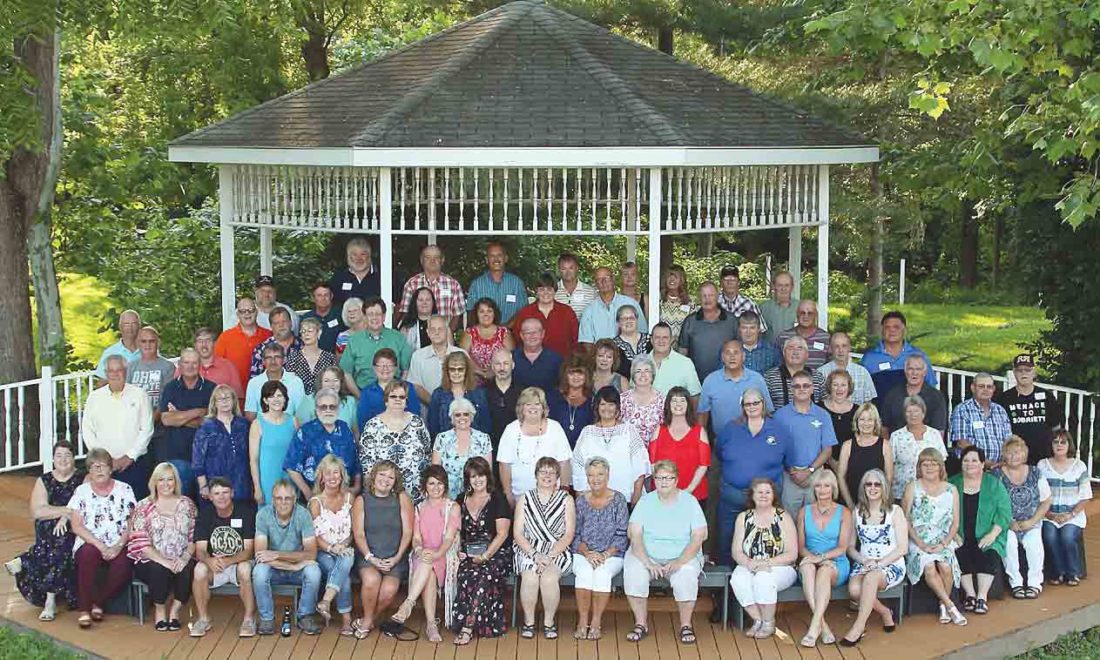 Frontier High School Alumni Association for classes 1969-1990 held their eighth annual class reunion on June 8 and 9, 2018. For both nights the festivities were held at the Quality Inn in Marietta, on Pike Street, inside the Grand Ballroom.

Frontier High School Alumni Association for classes 1969-1990 held their eighth annual class reunion on June 8 and 9, 2018. For both nights, the festivities were held at the Quality Inn in Marietta, on Pike Street, inside the Grand Ballroom. For the Friday night mixer type evening, approximately 143 classmates and or guests started arriving at the hotel around 6 p.m. The mixer type evening offered a sound system for listening to music from the ’70s and ’80s era. A cash bar, light snacks, soda and water was provided for the guests of Friday night.

Saturday night there were approximately 132 total alumni and or guests. The evening started by registering at the door and social hour began at 6 p.m. At 7 p.m. the alumni gathered outside the hotel at the gazebo for a professional class picture taken by Mark Stewart of Stewart Photography. Anyone still interested in purchasing a 8×10 group photo can still do so for a $15. charge. The $15 charge includes the photo and mailing charges. Call 740-374-4026 if interested.

Throughout the weekend the alumni browsed through picture albums, scrap books, year books, looked at the memorabilia table and watched a slide show of previous reunions and functions the alumni has been involved in. A memory table was dedicated to the classmates from 1969-1990 that have gone ahead of us. The display is to honor the deceased classmates; their senior picture is placed in a photo album and then placed in their appropriate year of graduation. A single candle was lit in their memory. The table also held a picture frame with each deceased classmates name in it. Adorning the table was a beautiful arrangement with 6 beautiful yellow roses, donated by Oopsa Daisy Florist in Newport.

Gary Hewitt (1970) gave a blessing before the buffet styled dinner began. The crew from Tasteful Occassions Catering that is managed by Jason Ware served the group their prime rib & chicken dinner. For dessert, cake was enjoyed by all. FHS cougar head cakes iced in FHS colors were created and decorated by the talented Dawn Walls Gutberlet (1988). Also making their way to the dessert table were 4 specialty cakes. (hoho, lemon, and 2 peanut butter) Door prizes were won throughout the evening that were provided by area merchants and alumni. Winners were asked to thank the business owners who donated as the winner went to collect their prize. The local band Fourth Link played after dinner. The band consists of all Frontier alumni, from the class of 1983 is Phil Petty, Brian Fouty 1989, Jesse Eddy 1997, Josh Davis 2003, James Perrine 2002, and Jimmy Roux.

FHS Alumni Association 1969-1990 will hold their 9th annual class reunion on June 7 and 8, 2019. More details closer to time of the reunion will be sent to alumni from 1969-1990. We try to send to your email addresses and social media first, then USPS; it is important to make sure we have your current information. Information on many classmates could not be found; call 740-374-4026 so we can get you current.

Casto Dana and Kasey Casto of Reno announce the birth of their son, Gunnar Jax Casto. He was born at 1:38 a.m. ...

Washington State Community College (WSCC) is where class of 2011 alumna Jessie Scheimann discovered her love of the ...

At Marietta College, students have a variety of opportunities to grow and gain experience academically and ...