How sweet it is for MC

Pioneers take down Arcadia in second round 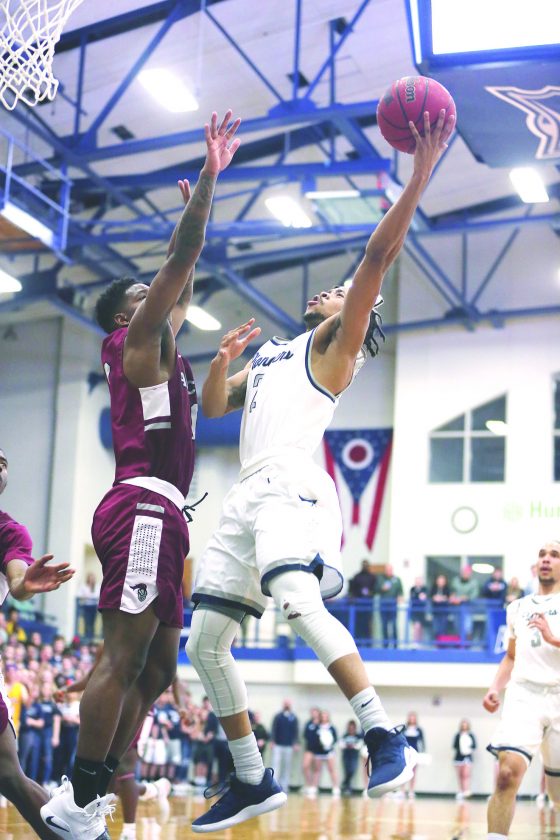 After Marietta College got a double-digit lead on Arcadia University late in the first half, it never dipped below 10 points again.

With a Sweet 16 berth on the line, the nationally-ranked Pioneers took care of business, defeating the Knights of Pennsylvania, 88-76, Saturday night in an NCAA Division III second round men’s basketball game at Ban Johnson Arena.

“Man, it feels good,” said MC head coach Jon VanderWal. “I know that. It was a lot of fun in the locker room here recently.

“I’m just really proud of these guys. Our team was really focused this week, and I think it showed on how we played. Even today with less than 24 hours of prep, I thought our guys were dialed in and knew what actions they were going to run.”

“Most of it (points) was in the mid-range and layups,” Wallace said. “I was only one for four from 3.

“There was good ball movement today. And, they (Knights) really collapsed when we would penetrate.”

MC senior non-starter Keith Richardson chipped in with 13 points, while Kyle Dixon netted nine and Mel Shuler and Jason Ellis each had eight. Kyle Matoszkia grabbed a game-high 12 rebounds, coming off the pine. The Pioneer bench outpointed the Knight subs, 49-28.

“We’ve got some good guys we’re bringing off the bench,” VanderWal said. “That’s what’s going to make this group special. Every team’s different, and this year’s group, I think what makes them really good is our depth. They’re kind of a relentlesss that just keeps coming after you. That’s been kind of our MO all year, and it really helped us out this weekend and in this tournament.”

Sparked by Wallace’s 12 first-half points, Marietta led 48-34 going into the locker room. The Pioneers took a double-digit lead, 36-26, at the 4:38 mark when Wallace scored a bucket and bonus freebie.

Early in the second half, Hoyng scored five straight points on a deuce and triple to make it 53-34. A short time later, Shuler also tallied five consecutive points, and the Pioneer lead bulged to 22 (58-36).

Arcadia battled back, and actually cut it to 10 (82-72) on Reilly’s 3 with just a little over a minute remaining in the contest. The Knights outpointed the Pios, 42-40, in the second half.

“It’s great to be back in the Sweet 16, but we’ve got to make that next step,” VanderWal said. “And this group has got the ability to do that, too.”