Numbers up at MC’s Camp of Champs 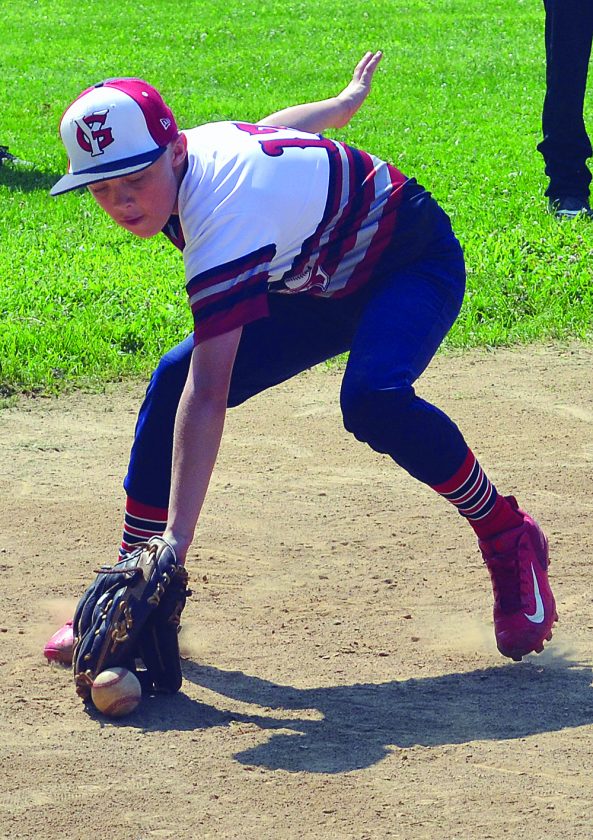 Photo by Ron Johnston Wyatt Powell of Parkersburg backhands a grounder at the infield station during Marietta College’s Baseball Camp of Champs Tuesday at Bantam Fields.

With Don Schaly Stadium being upgraded this summer, the annual Marietta College Baseball Camp of Champs conducted business as usual this week at the Bantam Fields at the Washington County Fairgrounds.

“This is the first time we haven’t had it at Don Schaly Stadium for obvious reasons with the renovations,” said veteran MC skipper Brian Brewer. “But Jim Brown and the Bantam League folks agreed and said it would be no problem over here.

“We’re certainly very appreciative of them opening this up for us. They’ve been very welcoming, and we’ve been very fortunate to have this facility. And the kids are really liking it so far.”

The 3-day camp got underway Monday, and is scheduled to conclude today. Brewer was being assisted by a staff of nine, including Tyler Engle, Isaac Danford, Chad Langley, Brenden Lacorato, Mike Mulvey, and Matt Warden to name a few.

“The numbers are up, and the energy’s good,” the Pioneer boss added. “We’re at about 65.

“We usually average somewhere between 45 and 52.”

Brewer said the majority of the youngsters were from Marietta and the Mid-Ohio Valley, but…

“We actually got two kids from California in town visiting grandparents,” he said.

With four fields operational, each day started with station work in the infield and outfield. There were also bunting and hitting stations.

On Monday, the campers worked on throwing mechanics, and arm strength (miles per hour) was tested in the afternoon, along with foot speed in the 40-yard dash.

“The camp is helping me out in getting better, and I’m having a lot of fun,” said 7-year-old Brecken Hendricks of Vienna. (Hendricks’ father Chris Hendricks was a former Pioneer standout and member of the 2006 MC national championship team.)

Luke Nichols of Belpre was also enjoying his first year at the camp.

“It’s exhausting,” he said. “I’m still learning, and the coaches are nice.”

Jake Maone of Vienna, another first-year camper, liked the fact there were “a lot of people to play ball with.”

“I’m having a lot of fun here with all my friends,” he added.

Tuesday focused again on arm strength as far as distance and accuracy throws at targets.

“(Wednesday) we’ll review all of the station work and have some games in the afternoon,” Brewer said.