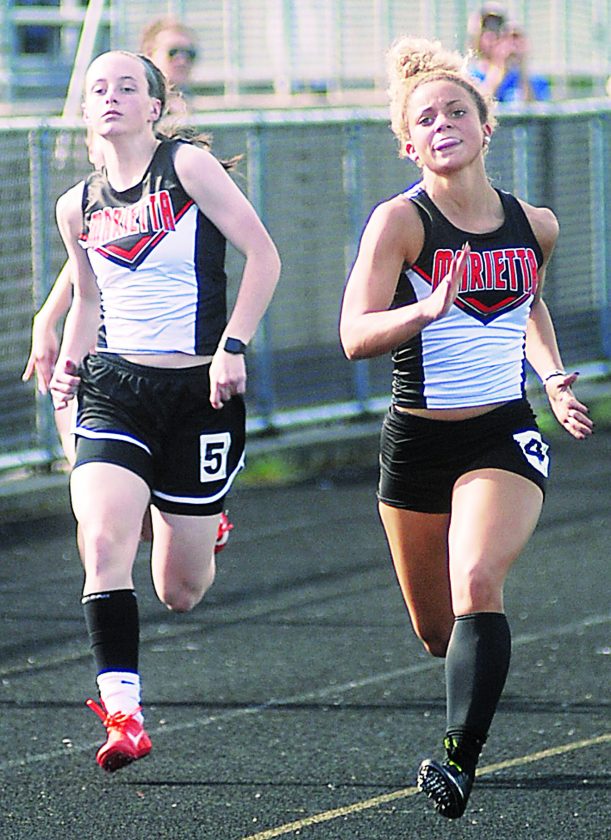 PARKERSBURG — The 20th annual Erickson Invitational had a little bit of everything on Thursday night and that included eight new meet records.

Led by high-point freshman Allie Germann (32 points), Winfield’s girls rolled to the team title with 169.5 points. The Generals topped host Parkersburg South (84) on its senior night while Marietta (74), Warren (69.5) and Parkersburg (56) rounded out the top five.

Despite having 300 hurdles champ Justin Lough getting disqualified, the Warren boys managed to tie the Big Reds of Parkersburg, 114-114. The host Patriots checked in with 75 points for third while Winfield (70) and Ravenswood (55.5) followed.

“No, I wasn’t expecting that,” said Parkersburg South freshman Samara Nunn of winning the 400 with a new personal best time of 58.93, which just edged Winfield’s Baylee Adkins’ effort of 58.99.

“My coaches and my mom tell me stuff that I need to work on, like my start.”

Not only did Nunn win the race, but she broke the previous record of 59.41 set by Waterford’s Heather Fulmer back in 2001.

“Really? That’s great. That’s awesome,” Nunn replied when she was informed of her record-breaking performance.

The Patriot girls of head coach Tara Swiger also had the high jump champ in Erin Williams, who cleared 5 feet before runner-up and fellow Patriot Madi Gersper did the same.

“Samara had the goal set. I think it’s great when she has someone to push her. She’s a competitor and doesn’t like to lose. She had a goal set for under a minute and she did it. That’s awesome.”

Sayre established a new meet record in the mile with a time of 4:24.9 as Warrior teammate Jake Herriott was second in 4:28.00. In fact, third place finisher Anthony Siler of John Marshall (4:30.41) and fourth place finisher Benjamin Lake of PHS (4:30.68) also broke the old Erickson Invite mark of 4:31.42 set in 2000 by Huntington’s Larry Atkins.

Warren’s dominance in the 4×800 continues to grow this spring. After breaking the Rocky Brands Invite stadium and meet records earlier this spring, the quartet of Yost, Brennan Perdue, Jake Herriott and Sayre did the same with a final clocking of 8:13.30. South held the old mark of 8:17.56 since 2000.

Despite having to settle for a tie, PHS veteran head coach Rod O’Donnell was just glad to have some solid competition.

“That was a good one for us,” admitted O’Donnell. “They are a good team. That’s a good group.”

The other individual champ was Monarch Brennen Wright topping Patriot Levi Rice for the high jump crown. Wright was the first to clear 5 feet, 10 inches.