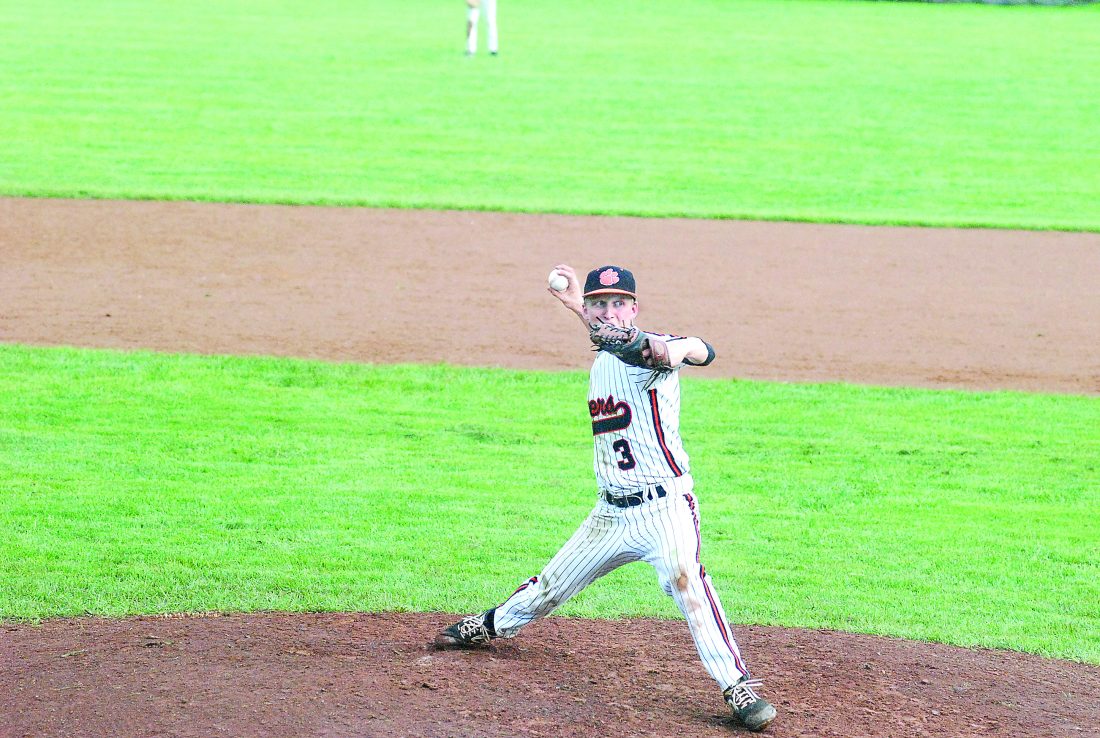 After falling behind by five runs early in Monday’s Division II sectional semifinal at Legion Field, Marietta had to find a way to hold Waverly in check until its offense could get rolling.

Senior Kail Hill delivered in a big way as the right hander tossed five innings of shutout, no-hit relief while the Tigers offense responded by pounding out 12 basehits as Marietta rallied for a 13-7 win.

Hill retired the first 12 batters he faced and then worked his way out of a bases loaded, no one out jam in the seventh inning as MHS advanced to a sectional final Thursday.

“I had a good fastball and I was just trying to get ahead early with it,”said Hill, who walked two while striking out seven. “We played with a lot of energy and just played good team baseball.”

Things would not start out well at all for the white, orange and black as Waverly scored three times off of Marietta starting pitcher Corbin Alkire in the opening inning keyed by an RBI double by first baseman Tucker Tackett and a two-run, two-bagger by starting pitcher Derek Eblin.

The visiting Tigers added two more runs in the top of the second when shortstop Ian Gillen connected on a long two-run homerun to left field for a 5-0 lead.

Marietta began to chip away a bit at the Waverly lead as they took advantage of some wildness by Eblin and a two-out fielding error to score three times in the bottom of the second without collecting a single base hit.

Waverly responded once again in the top of the third as catcher Braydon Snodgrass led off with a double and moved to third on an infield single by Hayden Shanks.

After Snodgrass scored when the Tigers committed a throwing error when Shanks attempted to steal second, Hill entered the game in relief of Alkire.

Eblin greeted Hill by slicing a line drive into center field that MHS center fielder Dakota Miller made an outstanding diving catch on as Shanks tagged and scored from first.

Marietta head coach Josh McKitrick felt that despite the seventh run of the game scoring on the sacrifice fly, Miller’s web-gem provided his team with a bit of a spark.

“That was a huge catch by Dakota and was a real momentum changer,” said McKitrick. “He has done a great job all year for us and that was a great catch.”

Marietta got those two runs back in the last of the third as Adam Coil singled and eventually scored on an infield ground-out before Miller singled and came into score on a perfect bunt single by right fielder Mark Duckworth.

MHS stranded a pair of base runners in the fourth inning before scoring four times in the last of the fifth to complete the comeback.

Miller led off the inning with another basehit and moved into scoring position on a sacrifice bunt by Jarrett Jackson.

After a wild pitch and a walk to Mark Duckworth put Tiger runners on the corners, shortstop Derek Duckworth plated Miller with a bunt single up the first base line.

Catcher Justin Thompson walked before Cole Alkire singled up the middle to drive in both Duckworth’s as the Tigers took a 8-7 lead.

Hill helped himself by singling in the fourth run of the inning.

The home Tigers added four more runs in the last of the sixth and once again Miller got things started by doubling for his third hit of the game.

Thompson doubled in a pair of runs later in the inning and Marietta capitalized on some Waverly wildness to score two more times to take a 13-7 lead into the final inning.

Hill allowed his first baserunners of the game in the final inning as he walked the first two Waverly hitters and after a Marietta fielding error loaded the bases with nobody out, the future Malone University Pioneer retired the final three hitters without allowing a run to score to clinch the win.

Marietta pounded out 12 basehits in the game, all coming in their final four at-bats.

“We’ve swung the bats all year we just came out a little slower than we would have liked today,” said McKitrick. “It would have been easy when we fell behind for these kids to hang their heads and be one and done. The perseverance they showed to comeback was unreal.”

In addition to his three basehits, Miler scored four runs for the Tigers.

“I felt really confident tonight and was able to make good contact,” said the MHS junior center fielder. “It was tough to get down early like that but everybody stayed up and the guys on the bench kept us going.”

Marietta improved to 17-10 with the win and will now wait to find out the winner of tonight’s make-up game between Warren and Unioto to see who they will play next for a sectional title on Thursday.