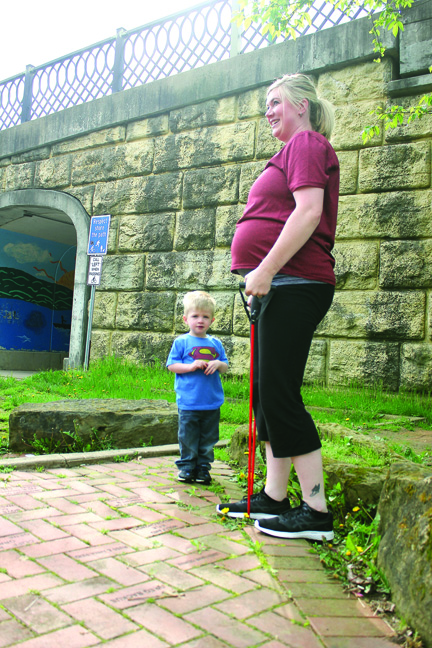 With strollers in front of them, there’s a new group roaming the River Trail three times a week.

Stephanie Sanderson, 33, of Devola, leads the pack on Tuesday, Thursday and Saturday mornings, with her 3-month-old son in tow.

“The big thing is to keep Blake moving; otherwise he starts crying,” explained Sanderson, who has been a certified group fitness instructor for three years and a certified personal trainer for a year. “So I wanted to start group fitness geared toward other moms in similar positions. If you’ve recently had a baby or are going to be having one and are getting back to working out it can be hard not only in arranging childcare but even in knowing how to modify exercises, so you don’t hurt yourself after giving birth.”

Sanderson’s continuing education courses have been in post-natal exercise, she explained, and it’s ongoing guidance in the 60-minute workout.

“You need to be medically cleared to exercise, first and foremost,” she reiterates at every class. “And don’t be afraid to modify, there is always a modification that’s lower impact or a different exercise that can be done so that someone who has had a cesarian or is even still not far out from a traditional birth doesn’t hurt themselves.” 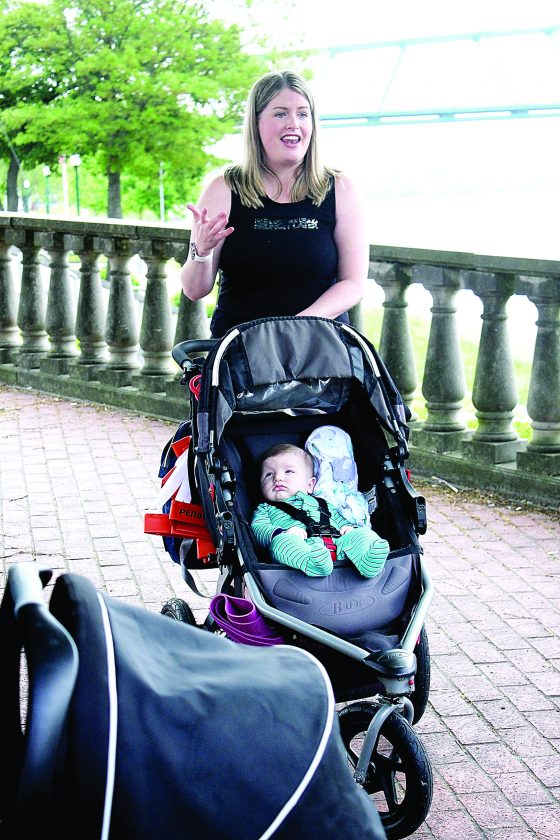 In the program’s first month, five to 10 regulars have shown up consistently for the class.

“I joined just to be active and get back into shape,” said Mary Thompson, 35, of Vienna.

Thompson had her son Max eight months ago, and the class gets both mom and son out of the house.

“It’s hard to find a workout class where you don’t have to leave your kid, plus the fellowship in the group has been wonderful,” she explained. “I can talk with the moms and not feel like a hermit only using baby voices.”

The workouts are built-in intervals with walking in between stops for leg, upper body and core exercises. 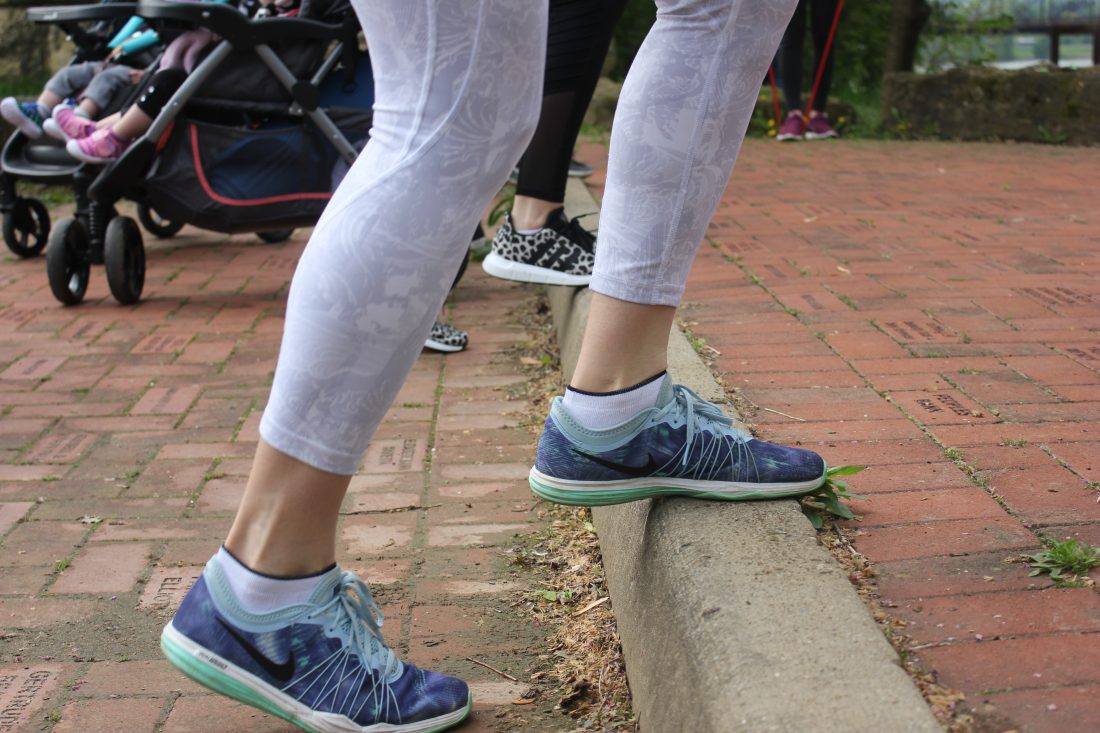 “And the breaks in between are nice, it’s not a personal trainer standing over you at the gym making you go rapid fire through your sets,” described Thompson. “It helps to break it up, so you’re not overwhelmed, but it’s also an intense workout.”

Sara Offenberger brings along her 2-year-old son Rhett for the workouts as she gets closer to her due date for her third child.

“I’m trying to stay in shape now, so hopefully the recovery is a little easier after the baby comes in two the three weeks,” she said as Rhett played with a toy car in the stroller during lunges in East Muskingum Park.

The workouts begin with a brisk five-minute walk starting at the fountain across from the Lafayette Hotel on Front Street.

“Then we can go either direction, it’s not a set route,” explained Sanderson. “And if the weather isn’t good we’ll work out inside Marietta Dance Academy.” 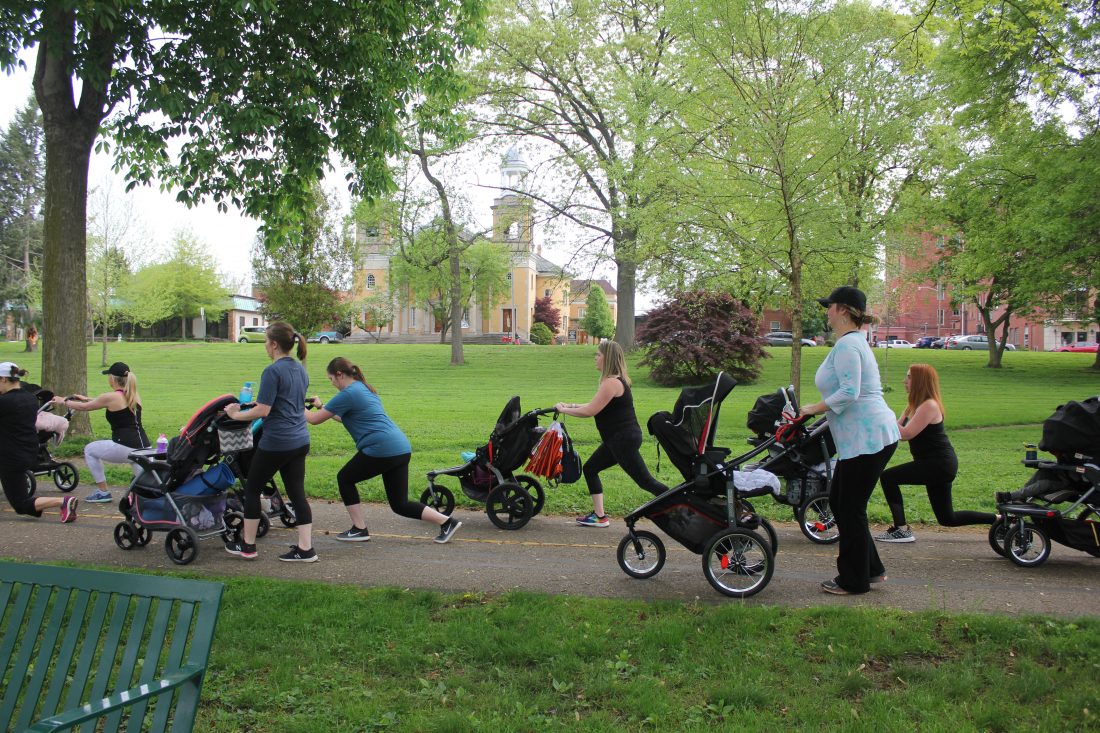 Following the first five-minute walk Tuesday, Sanderson stopped the nine moms at the picnic tables behind the Armory.

“We start first with our legs, they’re the biggest muscle group,” she explained.

At the first stop, there were squat jumps, with modifications for balance and for less impact, then the second utilized a concrete curb for quick steps.

“I try to use as little equipment as possible, you can bring a yoga mat if you want for some of the core work, so you don’t get too dirty,” explained Sanderson. “But we use obstacles mostly that are by the path around us, and I will first show the exercise, then show the modifications you can do.” 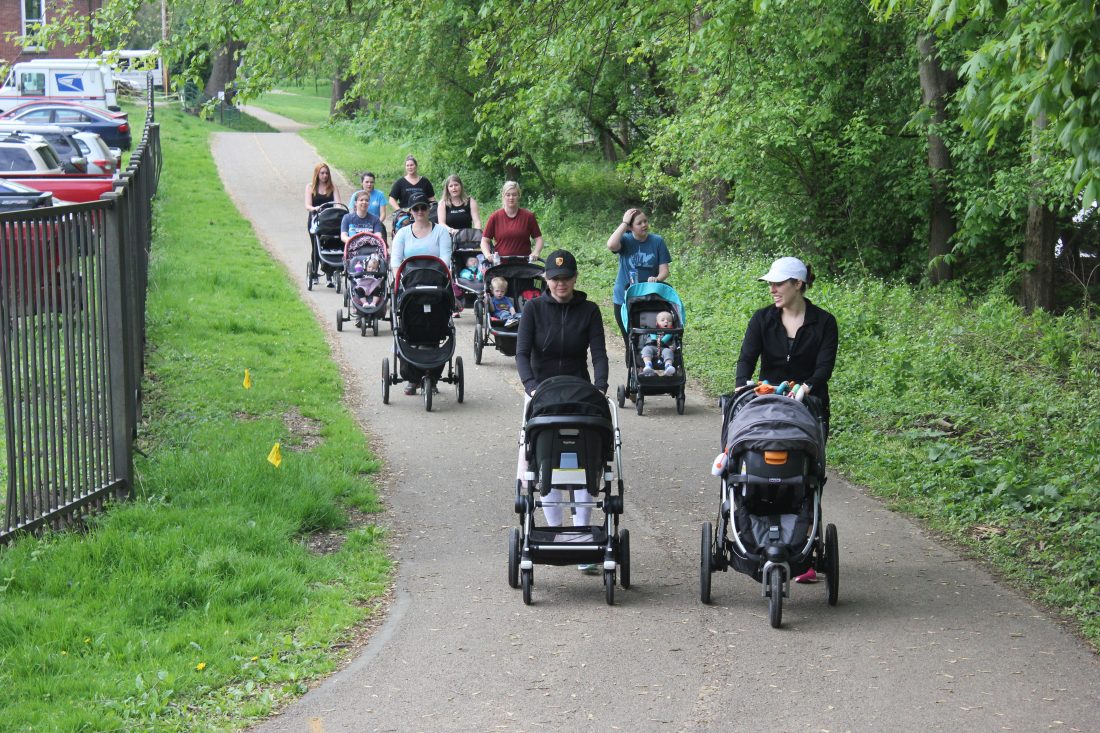 ¯ Classes take place at 9:30 a.m. on Tuesdays and Thursdays.

¯ All classes meet at the fountain on the Ohio River levee across from the Lafayette Hotel. In inclement weather classes are held inside Marietta Dance Academy on Front Street.