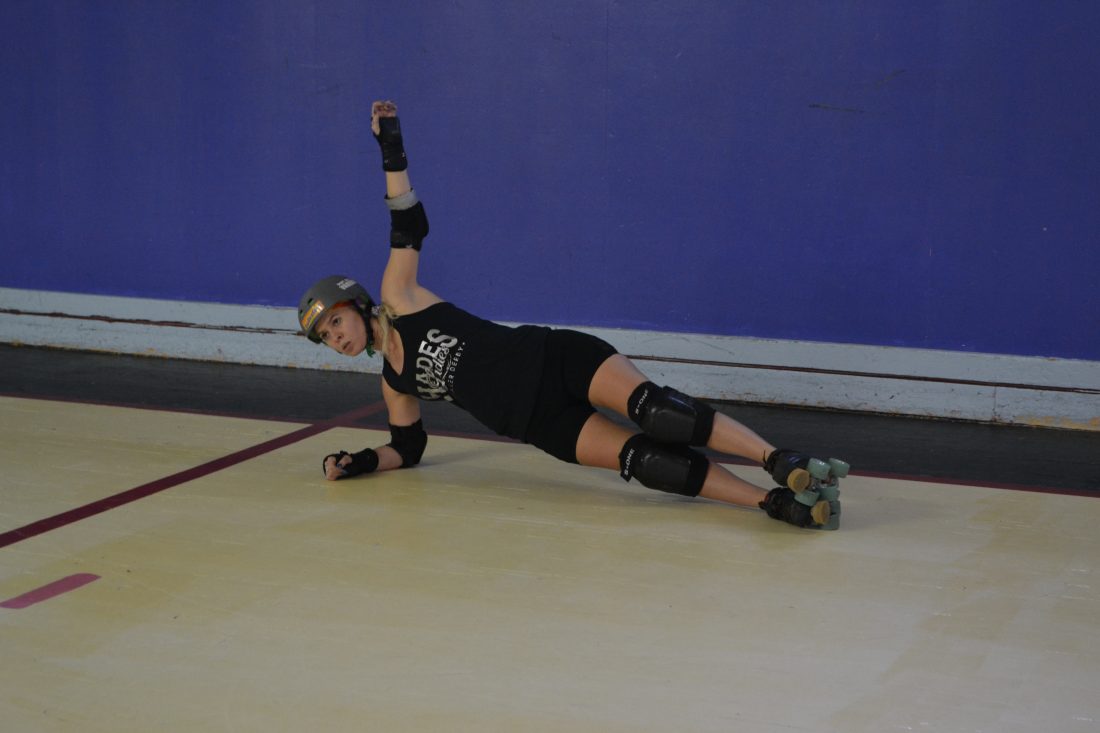 They come from all age groups and occupations. The only thing they all have in common? The love of roller derby.

They are the Hell’s Orchard Roller Derby, a charter member of the Women’s Flat Track Derby Association. They are also known locally as the Hades Ladies, whose home rink is the Marietta Roller Rink. Players started practicing in 2010 and their first home game was in 2012.

But the roller derby you may have grown up with is not what is played today. The entertainment factor is still there, but there is not as much theatrics. But make no mistake, these ladies are athletes.

Watching them practice, you see what they put their bodies through during each bout. During warmups, there are sprints in quad skates, then Coach Adam Gordon will call for them to plank.

The ladies sprint either at moderate or fast speed, then at a tweet of a whistle, stop and drop to the ground to plank. They raise themselves from the ground on one elbow, with the other hand raised above them, their legs stretched out to the side. They hold this “plank” for 45 to 60 seconds, and when the whistle is blown again, they jump up and start sprinting again. 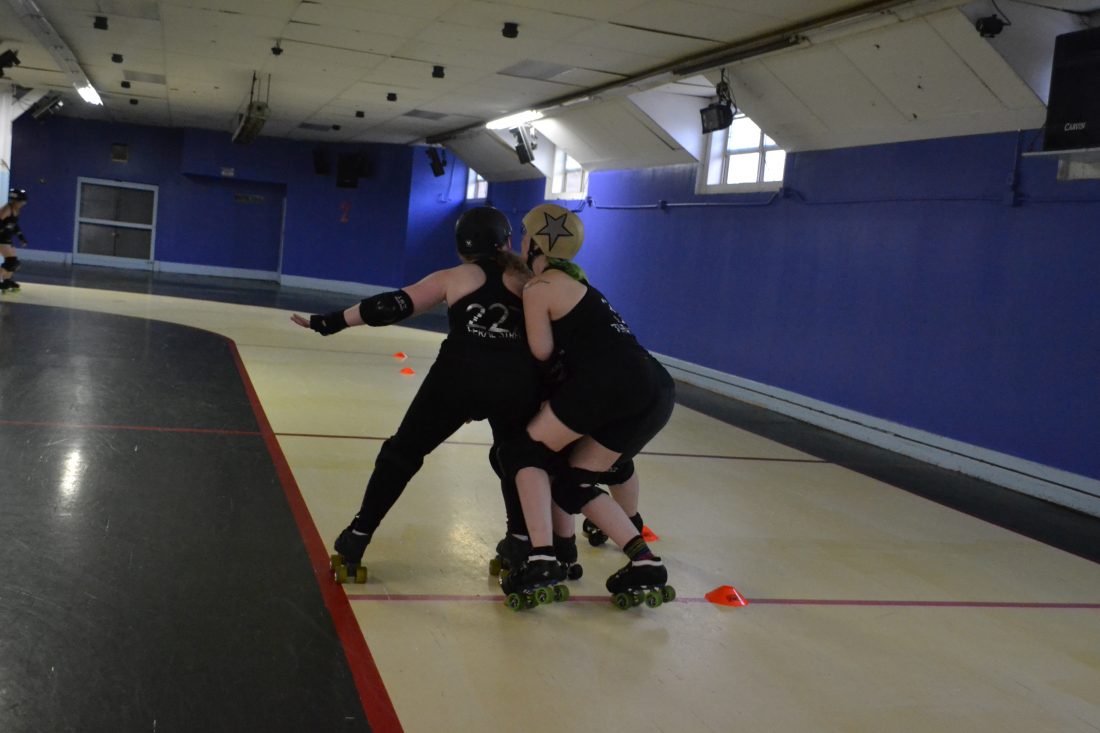 Practice and plenty of safety equipment keeps the women from getting major injuries, but it sometimes happens.

“There’s anything from a lot of bruises to sometimes it’s like a broken pinkie,” said Devan Gordon, first-year captain of the team and also known on the rink as “Thrash Gordon.” “We’ve had people break their ankles or wrists. The first scrimmage I was in, I broke my tail bone.”

She said the injuries are what separate players who never play again to those who get hurt and come back.

“We also had two girls who both broke their legs and after surgery, came back for another season and gave it their all,” Gordon added. 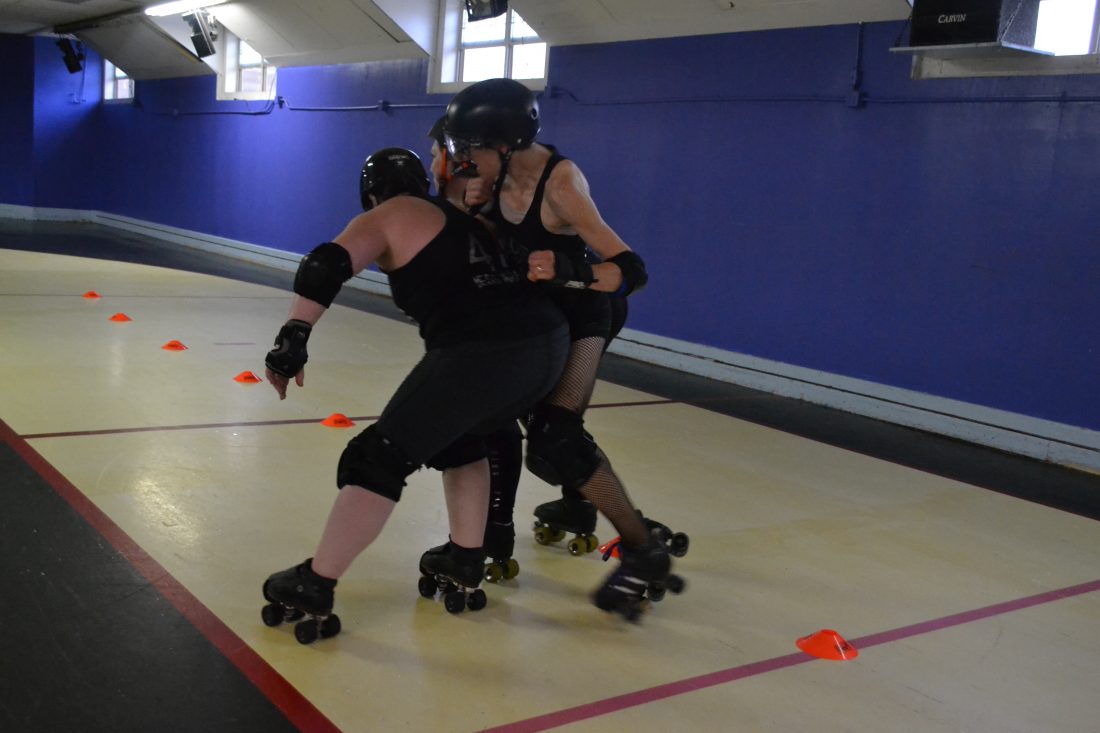 The Hades Ladies is made up of women from around the area who had varying skills when they joined the team.

“Some have never played and some have. Some join that can’t skate,” Gordon said.

The team consists of Sara Ryckebosch, a 43-year-old cookbook author from Marietta who goes by the name “Carrion the Librarian;” Lisa Ward, a 47-year-old warehouse associate from Howard who goes by the name “Salem Slammer”; Kayleigh Pangle, a 32-year-old travel nurse from Caldwell who is called “The Tinderizer”; Jessica Hollis, 34, a cardiac telemetry nurse from Little Hocking who is called “Jess Krazy”; Meryl Williams, a 33-year-old marketer from Caldwell who is called “Feral Streep”; and Gordon, a 28-year-old graphic designer and bartender from Parkersburg.

Miranda Michaud, a 22-year-old from Marietta, is new to the team and isn’t bout ready, so she doesn’t have a nickname yet, Gordon noted.

They also have a bench manager, WesLee Apshaga-Meaux, who has taken the name “Wess The Destroyer.” 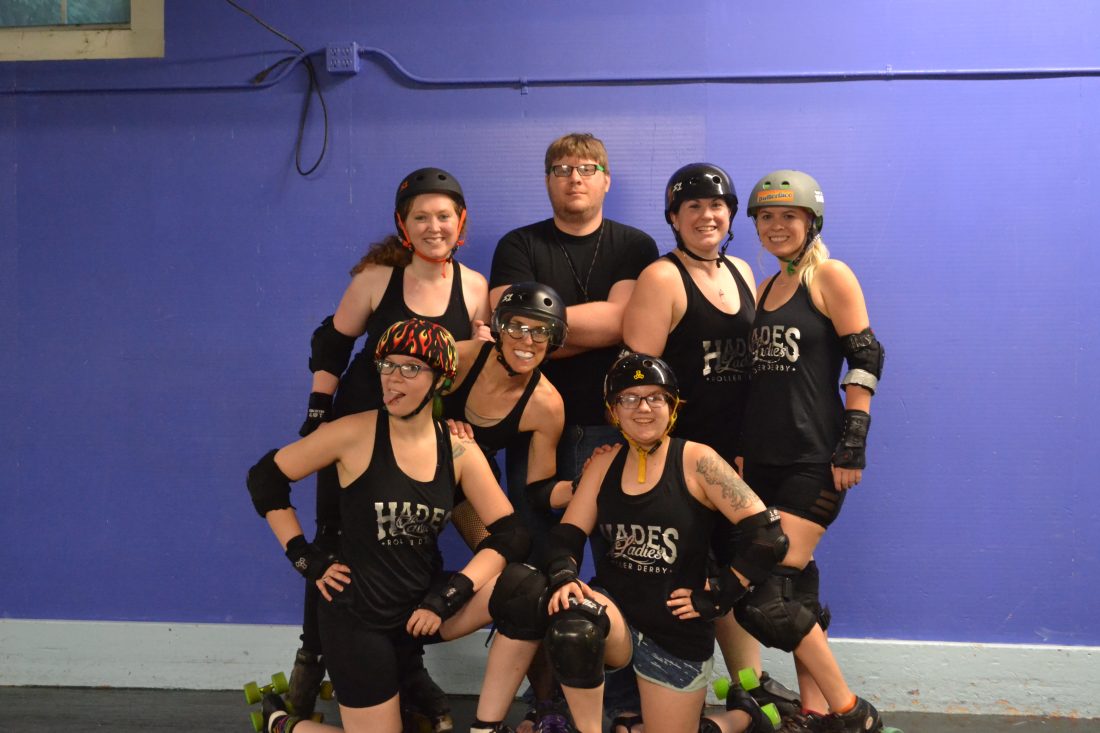 “He dresses in chain mail with an ax,” Gordon said. “He’s our mascot when he’s not playing.”

She added, “there are nurses, cooks who wrote a cookbook, a social media blogger and day care worker. We get all kinds of people.”

During practice, along with sprints and planks, they also work on their blocking and hitting. Knowing the rules of the game and where they are legally allowed to hit is important to the team.

The WFTDA rules are that the flat track roller derby is played in two 30-minute periods. Those two periods are broken into units of play called “jams,” which can last up to two minutes. In between each jam is a 30-second break.

Each team has five skaters during a jam, four of which are blockers. The other is known as a “jammer” and wears a star on her helmet.

The jammers start play behind the blockers, which are known as a pack. Each time the jammers pass one of the other team’s blockers, they score a point. The jammers just have to initially pass the blockers and skate all the way around the rink before they can pass them for points. The team with the most points at the end of the game wins.

In the past, roller derby has been known for antics such as throwing girls over railings into the audience, but there are rules against where you can and can’t hit.

Skaters are not allowed to use their heads, elbows, forearms, hands, knees, lower legs, or feet to make contact. They also cannot make contact on their opponents’ heads, backs, knees, lower legs, or feet. If any play is ruled unsafe or illegal, the skater can be penalized and they will be required to sit in the penalty box for 30 seconds of jam time.

The love of the game is what brings the ladies back week after week.

“I’ve pretty much always been a rink rat,” said Hollis. “A complete and utter tomboy.” She said she saw the Athens team play and then saw the Marietta team play.

“I came one day and didn’t leave,” she added.

She noted there is no upper age limit to the team, but women have to be at least 18 years old to join.

“I played with a lady in her 70s. She was an awesome skater,” Hollis said. “She was scary.”

Williams is in her second season with this team and her third overall, having started skating in Columbus.

“I skated a lot as a kid,” she said. “I learned my basic skills in Chicago and had limited contact. I moved to Columbus and learned the rules.”

She said it’s the camaraderie between team members that she likes best.

“I really like the teamwork involved,” she explained. “I like that it’s women teaching women to do things.”

She said roller derby players seem to be more introverted than other athletes, but they are able to work together to make the team better.

Gordon, who has been playing for seven years, started when a customer at her screen printing business wanted a specialized shirt.

“Someone wanted a shirt that said ‘Lovett Ruff,'” she said.

Gordon asked her about the shirt and the customer explained it was for a local roller derby team.

“I was about to join a tennis league, but decided to join a roller derby team instead,” she added.

Their next bout is Saturday against the Flock Ewes Roller Derby from Cincinnati. The event is called “Summer-Shovin,'” a play on Grease’s “Summer Lovin,'” Hollis said.

The game will be held at the Marietta Roller Rink at the Washington County Fairgrounds, with doors opening at 4 p.m. and first whistle at 5 p.m. The cost is $12 for adults and children 8 and younger get in free with an adult ticket.

The games played as the Hades Ladies are non-sanctioned by the WFTDA, while the Hell’s Orchard games are sanctioned.

She noted there are not as many games this year.

“This season there are fewer games; we needed to recruit and train this year due to retiring skaters,” said Hollis, adding that five players retired. “It was a big hit to our roster.”

Profits from the games are donated to charity. The team’s first home game was played for the Humane Society of the Ohio Valley. They’ve also played for Dogs 4 Warriors, which saves animals and pairs them up with veterans as comfort animals.

¯ By 2010, there were more than 450 flat track roller derby leagues worldwide.