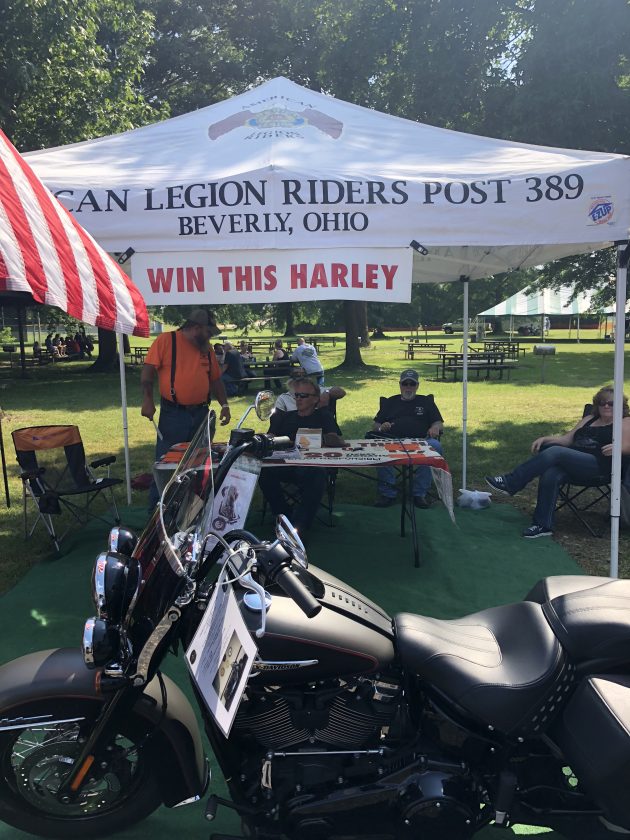 Photo contributed by Robert Fitzgerald Organizers from American Legion Post 389 in Beverly wait for motorcyclists on the 2018 Mid-Ohio Valley Freedom Ride to arrive in July 2018. The event this year, its second, takes place Saturday and is expected to draw more than the 258 riders who participated last year.

Good weather for riding is forecast for the weekend, and the organizers of the second Mid-Ohio Valley Freedom Ride expect plenty of motorcyclists to show up Saturday for a fund-raising tour through scenic Washington County.

Robert Fitzgerald, an Army veteran and executive director of the Washington County Veterans Service Office, said the first ride, held in July 2018, attracted 258 entries and there’s no reason to think there won’t be more this year.

“It was really big last year, for the first time,” he said Tuesday. “It’s supposed to be 92 degrees and sunny Saturday, and we’re expecting more than we had last year.”

Fitzgerald said the route will take riders through the hills and forests of the area, leaving from the VFW post and swinging down to Belpre, then to the Beverly Eagles Club, the Hideout in Dexter City, the Edgewater Cafe near Lowell and back to the Marietta VFW, about 90 miles in all.

“If you went nonstop, it would be about two hours, but it’s a poker run, you have to stop, go in and draw a card at each place, so it will probably be three and a half hours,” he said.

Proceeds from this year’s run will be donated to finish Marietta’s Gold Star Park, a tribute to veterans’ families located on Lancaster Street. Last year, the ride raised $5,600, all donated to Gold Star families.

At the end of the ride, there will be food, family activities and live music into the night.

“We’re having a hog roast, there’ll be smoked pork, chicken, hot dogs, burgers, we have a band, Stallion, that plays ’70s, ’80s and ’90s music, indoors at the VFW post. The registration covers all that,” he said. Bouncy houses and obstacle courses will be set up for the children, and merchandise will be sold, including T-shirts.

The ride, Fitzgerald said, is more than a way of having a good time and raising funds.

“It’s a veteran-focused cause and an outreach program for vets who might not know about the services they have available. There will be booths for agencies, American Legion, AMVETS, disabled veterans, We Have Your 6, Supportive Services for Veteran Families, good resources for veterans,” he said. “Many of them don’t know about these things.”

In its second year, the Freedom Ride already is the biggest motorcycle event of the year in the Marietta area. Fitzgerald said he hopes it will keep growing.

“I ride a motorcycle everywhere, and I mention this event to all the people I meet, and it’s become well-known already. My hope is that it will become the largest riding event in Ohio. Wouldn’t it be great if we could put Marietta on the map for that?” he said. “And it’s the weekend of Riverfront Roar, people can come in for the ride and enjoy the Roar activities at the same time.”

Bobbie Carpenter is one of the organizers for the ride and serves as secretary for the motorcycle group at VFW Post 5108. Last year she stayed at the post while her husband took the ride.

“It was an amazing experience. I worked at many different places but was at the post when the riders came in, and I talked to all of them. Everyone enjoyed it, riding that beautiful motorcycle scenery, the camaraderie, knowing you’re doing something for a good cause, trying to help veterans,” she said.

The connection between motorcyclists and veterans is universal across the country.

“Many of the older veterans, when they came back I think they were looking for that adrenaline rush, that might be how they originally got into biking, what led them to that hobby,” she said. “All the biker community I’ve met in general is just caring, hard-working individuals who want to help, whether it’s a veteran or a sick child.”

Fitzgerald said veterans and motorcycles are a natural combination.

“Veteran service organizations all over the country, each chapter tends to have a riding group,” he said. “I think maybe it’s a way of continuing the brotherhood, you kind of miss that friendship, that bond, and motorcycles are a way of bringing it back, getting that feeling of freedom again.”