Prepping for the Fair 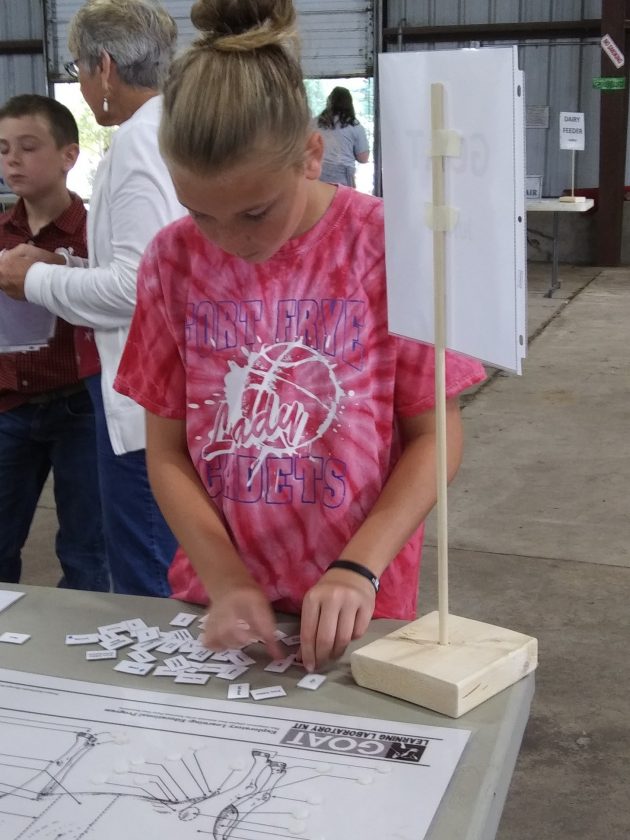 Elle Casto works to identify the different parts of a goat before showing her goat at the Washington County Fair later this summer.

Fair season is just around the corner for 4-H members who are busy getting their animals ready to be shown.

Saturday was the skillathon at the Washington County Fairgrounds, where youth got to show off their knowledge of their projects.

Elle Casto, 9, of Marietta, is showing her goat this year. It’s her first year in 4-H.

As part of the skillathon, each exhibitor has to show a judge they can label their project or animal, along with interviewing about their project books.

For instance, at the Barlow Fair, feeder calves, heifers, ducks, feeder calf steers and market dairy goats are sold. Only hogs will be shown and sold at the Waterford Fair, while the Washington County Fair will be chickens, turkeys, rabbits, goats, lambs, market steers and dairy beef feeders.

Bryer and Kaden Robertson, 14-year-old twins from Fleming, are in their second year of 4-H and have been busy raising market chickens.

“We’re responsible for giving them food and water. We exercise them and weigh them to know how much they’re gaining and their growth,” Kaden said.

He said the two weeks before the fair, they are carried so they are used to being held and calmer during the judging.

“We have their food up so their neck stretches, so it’s better meat and stuff,” he added. “We let them out to walk so their legs are stronger.”

Bryer is also showing two pens of three chickens. He said they sent letters to those who bought chickens from them last year to invite them back to the fair this year.

He said raising chickens just sounded like a fun thing to try.

“When we get a chicken a day old, they don’t have feathers to keep them warm. We have to keep a heat lamp on them until they get their feathers,” Bryer said. “It’s four to five weeks before they are completely feathered.”

The boys have a portable chicken coop that the chickens are put into at night. During the day, they are able to walk around in a fenced-in area.

Sharon Robertson, the twins’ mother, said the minimum requirement to be able to sell the chickens is 3.5 pounds.

Getting these animals ready for the fair can take months, if not longer.

Work on their projects starts with students choosing which animal they want to raise.

“They can start in third grade and become a 4-H member,” Zimmer said. “They can take 4-H projects, so that might be a special interest project or animal or livestock project.”

He said members can keep exhibiting their projects until they are 19 years old and the type of animal they choose depends on several things.

“Where they live, if they live within the city or have facilities for small or large animals,” he said. “Or what type of animal they are interested in or want to raise. Family tradition also comes into play. What did the parent raise?”

For 17-year-old Sierra Sinclair, rabbits were an obvious choice.

“I’ve been showing rabbits since I was 2 years old,” she said. “That’s what my mom showed in 4-H so I continued it.”

The Vincent teen has been in 4-H for 12 years and in the FFA for four years.

The FFA and 4-H are both a family affair for Sinclair as the 4-H club she is a member of is one her grandmother helped start 50 years ago. Many of her family and friends have been in both 4-H and FFA.

“For me, FFA was a continuation, since you start when you’re a freshman in high school. I had been in 4-H forever and just went into FFA,” she explained.

Sinclair has six rabbits at home and nine more are ready to go to market. She explained the rabbits she has at home are the breeders for the ones she sells at market.

“Unfortunately this year, we’ve had issues with survival rates. And it’s a county-wide thing,” she said. “There were several kids who had issues with making sure they had enough, so I had to buy some.”

Zimmer explained it is the responsibility of the exhibitor to pay for the feed, care and purchase of the animal. Sometimes the members take their earnings from the past year and reinvest to purchase or raise animals. They are also responsible for the cost of any expenses or vet bills.

“The payoff is when they sell the animals at the fair,” he said.

Before the exhibitors can show their animals, there are a few steps that are taken to make sure the animals are well cared for.

Zimmer said there is a yearly quality assurance class each member must take.

“With quality assurance, it’s more about raising the animal,” he said. “Any member that is exhibiting a market animal, which is going into the food chain, must know how to properly care for an animal, whether it’s keeping records or just animal welfare. It’s something we teach. It’s to assure they are producing a quality animal when it’s harvested.”

Along with quality assurance, members participate in showmanship, which divides the exhibitors by age – juniors, intermediate and senior.

“Their knowledge and expertise with animals should increase and the expectation of what they need to know increases,” Zimmer said. “With some of the larger animals, it is how the exhibitor presents and controls the animal in the show rings, as well as their knowledge.”

Brady Barth, 11, of Marietta, is raising market lambs to show and sell at the Washington County Fair this year. He’s also taking a gardening project to the fair.

“I’ve just always liked them–the looks of the lamb and their personalities,” he said, noting he’s been taking lambs to the fair for three years.

Showmanship is something Barth has to work on every day.

He said it’s hard to let them go at the fair.

Sinclair said rabbits can have litters up to five or six, depending on the breed. Hers are born from late June to late July and grow quickly.

“After they are weaned, which is normally a month or so, you have to feed them and learn to work with them a little bit. There is a part of showing called showmanship. It’s how you work with your animal and you show the judge what you know about it and how you can work with it,” she explained. “You have to go through checking over your animal to make sure it’s safe and healthy, so there’s different things. You have to look at the eyes, the nose, the ears. And go through a general check in front of a judge. They’ll also ask you questions based on age and what they think you should know about your project.”

Zimmer said there are many exhibitors in each animal class, from 11 turkey exhibitors to 200 hog exhibitors. The 4-H members who are showing hogs can show two, and some exhibitors may show more than one animal.

At the fair, the market animals are sold off. The other animals will get to go home. Sinclair said she has plans for the proceeds from her market rabbits.

“Half of the money goes back into the animals for feed or hay, medicines, anything they would need,” she said. “The other half goes into the bank for gas or college.”

Then in the spring, the process starts all over again.