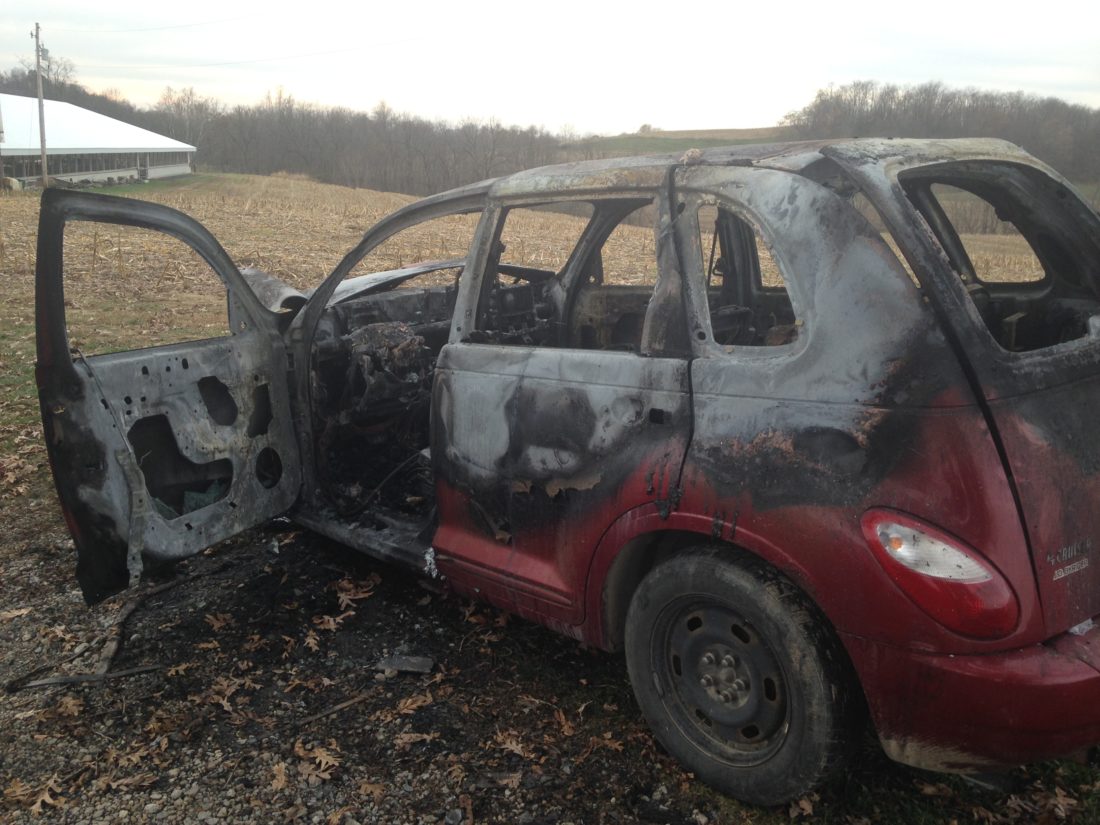 Photo submitted by Chris Kleinert Pictured is the car owned by William Riggs, 54, homeless, that was ablaze on Monday.

A homeless veteran lost more than a car as his Chrysler PT Cruiser caught fire, reducing everything he owned to ash Monday morning in Waterford.

“I went out that morning to start my car up and went back in the house to finish my coffee,” said Bill Riggs, 54, homeless. “I went back out and noticed it looked kind of dark, but I have tinted windows; I opened the car door to look in and the dash was on fire and smoke was rolling.”

Riggs said he fortunately had his cell phone in his pocket and was able to dial 911 and attempted to douse the flames in the meantime.

“I grabbed the water hose and it was frozen, believe it or not,” said Riggs, adding his nephew Chris Kleinert, 32, of Waterford, attempted to wash out the flames with buckets of water. “Everything was spreading.”

Kleinert said his uncle had been staying the night and said everything was obliterated in the fire.

“It was too destroyed by the fire to tell the cause,” said Lowe, noting nothing aside from the car and the items inside the car was touched by the flames. “The car was sitting out in the driveway away from all buildings.”

After the incident, Riggs was transported to the hospital due to a previous heart condition.

“He’s fine, now,” said Kleinert. “I think it was just an observation for the night.”

Riggs said he has a history of heart trouble and has had a couple heart attacks over the years. Losing everything in the fire was hard on him, he said.

“It was rough,” he said. “I’ve had heart trouble and a couple heart attacks; it put me in pretty bad shape.”

Riggs added he lost everything in the car aside from the clothes on his back and his cell phone in his pocket.

“My wallet, my briefcase that has my birth certificate and Social Security card was all in the car; I lost my laptop and all my clothes except for what I had on my back and my blanket and medicine…they are looking up my prescription to get my medicine down,” said Riggs. “I lost all of my personal items that may not have a whole lot of value, but they did to me.”

He was released from the hospital on Tuesday and said he didn’t know where he was going to go from there.

“I have family I can stay with, but everybody has dogs and I’m allergic to dogs, so that kind of makes it rough,” he said. “And I suffer from PTSD, so I can’t go to the homeless shelter, but God will get it straightened out.”

Riggs is an Army Airborne Veteran who served from 1979 to 1986. Kleinert has helped his uncle, but hopes others can join in and help Riggs get back on his feet. For more information, people can reach Kleinert at 307-214-1494 or email him at wstransportinc@gmail.com.

Riggs also wishes to thank the Beverly Volunteer Fire Department and those at the Marietta Memorial Hospital for all their help.

“They’ve really been wonderful,” he said. “They’ve all treated me with respect and dignity and I really appreciate it.”