Top stories of the year: Presidential election No. 1 local story 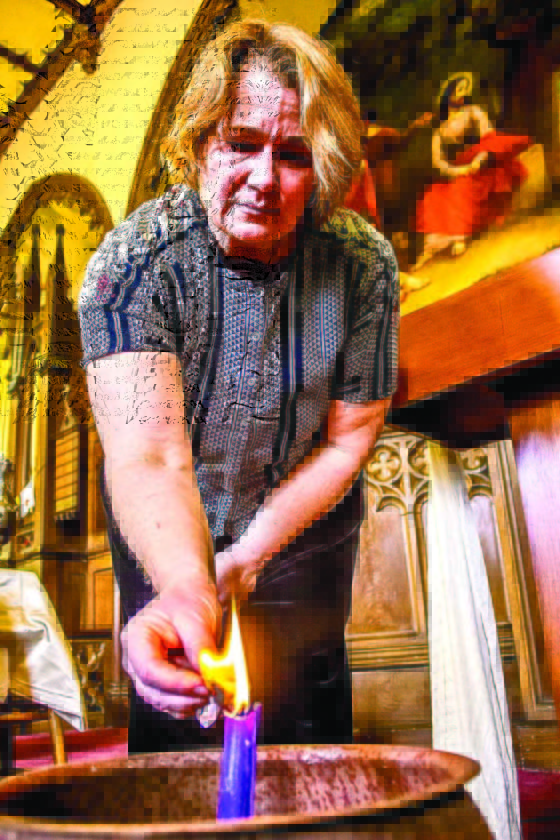 JANELLE PATTERSON The Marietta Times Katherine Hawbaker, minister of the Unitarian Universalist Society of Marietta, sets fire to disappointments from 2016 Friday in preparation for the fire ceremony to be held at her church Sunday. She said the presidential election results were included in some of the disappointments among members of the church.

On the minds and lips of the nation this year was the divisive and dynamic presidential election. Now, almost two months later, locals are still recovering from the shock of the nation’s decision or looking forward to a new direction for the nation.

“We had prayer and meditation after the election here because many in our congregation were upset with the results of the election after working hard on Hillary Clinton’s campaign,” said Katherine Hawbaker, minister of the Unitarian Universalist Society in Marietta. “Now many women are going to the March on Washington to show their fight for women’s issues continues and have looked to get more involved in local issues. I think our local community will be the venue for people to renew their place in the democratic process.”

Across the nation protests broke out after the results of the presidential election put Donald J. Trump in the position of President-Elect.

But now to let go of the divisiveness and any disappointments from 2016, parishioners of the Unitarian church will participate in a fire ceremony Sunday at 11 a.m.

“The ceremony allows us to write down the let-downs of the year and let them go,” said Hawbaker. “We can’t change what happened but we can move forward and get involved and look to how we can be changes for good.”

For Marietta resident Carol Steinhagen feelings of disbelief, depression and now shame have filled her mind these past two months.

“I’m ashamed that we have elected such a bigoted and ignorant man and looking at his appointments for cabinet these are going to be very bad days for the environment,” she said.

Trump has tapped several prominent figures for membership in his cabinet, which will first need U.S. Senate approval before being confirmed. His selection for secretary of energy former Texas Gov. Rick Perry, has left some, like Steinhagen, skeptical.

“Perry is a man who wanted to do away with the department, so the appointment only makes sense if you’re not interested in environmental preservation,” she said.

But for locals who are eager to see the days after the Jan. 20 inauguration in Washington D.C., cabinet picks including former GOP rival Ben Carson for secretary of Housing and Urban Development and Exxon Mobil CEO Rex Tillerson for secretary of state seem to make more sense.

“President-Elect Trump has selected a broad category of people of business, military and private experience who are qualified to do the job and bring different qualities to the table,” said Flite Friemann, 44, of Marietta. “Rex Tillerson has a ton of experience working with foreign business and will bring an outside perspective. But he will still be bolstered by career diplomats who have worked in the foreign service for decades and are professional ambassadors.”

Marietta resident Lee Ann Johnson, co-chair of Ohio’s Women for Trump campaign before the election and an elector in Ohio, said including Carson in his personal advisors is Trump’s way of bringing a variety of voices to the table.

“Like Abraham Lincoln, bringing in his competitors will make sure that all good ideas are talked about and given equal measure,” said Johnson. “And with other selections like the Cleveland Clinic CEO Toby Cosgrove to run Veterans Affairs, it shows that Mr. Trump values those who have had success in their prior work and can bring that to important national issues.”

Ohio Rep. Andy Thompson, R-Marietta, also agreed with the pick of Carson but said other selections like Tillerson and Betsy DeVos, tapped for secretary of education, will need to be reviewed after some time.

“I’m going to wait and see what Tillerson will do,” said Thompson. “We’ll see how he handles policies and we’ll see how Betsey DeVos does because I’m skeptical of how she will handle Common Core (education standards), which I am adamantly against. She’s said she is against it too but I’m not sure about her.”

In his final three months in office, President Barack Obama has worked to place the U.S. in a position closer to the Democratic Party’s line on several social issues including declaring two new national parks, barring states from defunding Planned Parenthood, officially scrapping the last vestiges of a U.S. registration system for Muslim immigrants and ordering wide swaths of the Atlantic and Arctic oceans to be placed permanently off-limits for oil drilling.

“This type of 11th hour action is common for presidents right before they leave office,” said Steinhagen. “I think it will be very difficult to undo many of his actions including the sanctions on Russia, especially since there was a lot of Republican support for those.”

Obama on Thursday imposed sanctions on Russian officials and intelligence services in retaliation for Russia’s interference in the U.S. presidential election through hacking American political sites and email accounts. Thirty-five Russian diplomats were ordered to leave the U.S. in 72 hours and two facilities closed.

The fallout after such a divisive election has renewed the resolve of many to fight even harder for their beliefs.

“People were heartbroken,” said Hawbaker. “First you had to sit and recognize those feelings and understand that but then there’s a time to let go of them. It’s such a difficult time but I feel strengthened by what President Obama has accomplished and will continue to support his great work.”

Regardless of how locals voted in the presidential election this year, Friemann said he was energized by the participation of Washington County voters and hopes that time will heal wounds left.

“In the end the American people were heard and I’m ecstatic by the voter turnout locally in our election not just for the presidential ticket but all the way down the ballot,” he said. “Now we can look to four years of healing and economic growth for the nation and really, the discord is the sign of a healthy democracy where you can voice your disappointment without fear of being dragged out of your home.”

– Secretary of the Treasury: Steven Mnuchin, a 17-year-veteran of Goldman Sachs.

– Secretary of Labor: Andy Puzder, the CEO of CKE Restaurants.

– Secretary of Agriculture: to be announced.

– Secretary of Veterans Affairs: to be announced.

How the top stories were selected

Staff of The Marietta Times compiled a list of 13 major news stories in 2016 and posted it as a poll question in the paper and online for several days in December. Readers voted on what they thought what was the top local story, and that determined the top 10 stories and the order in which they appear.

After the voting closed, two other big news stories took place. On Dec. 15, an explosive device was found in the Marietta Municipal Court building, leading to charges for a Marietta man. The device was brought into the building by a probation officer who planned to conduct a search of the bag.

On Dec. 22, a mobile home fire in Watertown took the lives of three people, Stephen Coulter, 38, Misty Perine, 33, and their 2-year-old daughter, Aubrey. Another man in the home made it out alive.