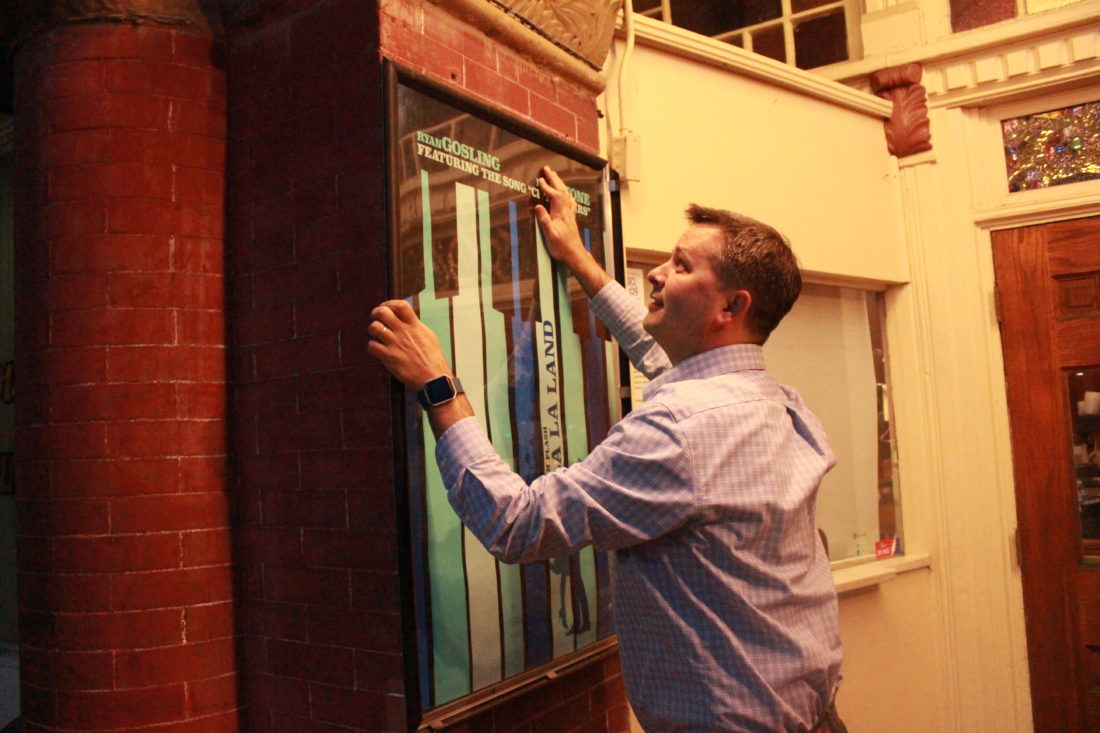 McCONNELSVILLE–Magic, movies and music have resonated within the halls of the Twin City Opera House for more than a century.

The 125th anniversary of the venue will be commemorated this year with a series of shows promised to pay homage to the legacy of entertainment in Morgan County’s first building to ever have electricity.

“It hasn’t closed for a significant amount of time except for a renovation in 1936 when they first installed the projection equipment,” said the opera house’s executive director, Adam Shriver.

Other upgrades to the 550-seat venue have included air conditioning and a switch from film projection to digital.

“But we’ve kept the doors open, and especially in such a small town, to keep that history alive and have this stage for all sorts of performances is something to be proud of,” said Shriver.

The stage has played host to a variety of shows including living history pieces, a turkey-calling competition, musical performances and magic.

“The stage began with the traveling operatic performances and vaudeville comedians and magicians,” explained Shriver. “But since the 1930s the doors have been kept open because this has been a movie venue.”

This year the stage will host not only Ohio country music star McGuffey Lane, but also a slew of comedians and magicians, the Southeast Ohio Symphony String Quartet and life-sized puppets performing a version of Charles Dickens’ “A Christmas Carol.”

“It’s really an ode to all this opera house has offered,” explained Shriver. “And this year is a big year for McConnelsville for more than just our 125th anniversary.”

The venue will also host shows during McConnelsville’s bicentennial celebration in July and live music during the 30th anniversary of Morgan County’s Civil War re-enactment.

“And the opera house is also hosting a period pageant for the kids during our bicentennial,” explained McConnelsville Councilwoman Diane Offenberger. “And we’ll have people dressed in (1817) period clothing and will have period games beginning in the square at noon with festivities lasting throughout the evening and wrapping up with fireworks at 10 p.m. (on) July 1.”

But to kick off the opera house’s celebrations for the year, the stage will play host to a tribute for a Morgan County native known amongst the great magicians of the early 20th century.

“McDonald Birch was a world-renowned magician in the 1930s and 1940s and he was born in McConnelsville and owned a home in Malta,” explained Shriver. “But he not only traveled the world with his shows, he performed them here on this stage and in the schools around the area.”

Thomas Ewing, author of “McDonald Birch: The Master Magician,” coordinated the performers to appear on the opera house stage April 29.

“I wrote the book last November and even own some of his pieces which I’ll display at the show,” said Ewing. “Two of his best acts were, ‘Princess the Vanishing Pony’ in which he would bring a miniature Shetland pony onto stage and raise her up several feet on a platform and then with a poof of smoke, she’d be gone. Then there was the ‘Scimitar illusion’ which newspapers of the day called the ‘quartering of a woman’ where he chained his wife Mabel to the bottom of a box and used a giant cleaver to quarter her in a long box.”

One of the comedic magicians joining the stage in tribute to Birch this April is Las Vegas veteran Scott Alexander of Pennsylvania.

“I’ll bring a carload of scenic effects,” said Alexander. “Only this time instead of a box car of magic like back in Birch’s time it will be in my own car.”

Alexander explained that Birch was a contemporary with the likes of Houdini, Blackstone and Thurston.

“Magicians now are always modifying their tricks and adapting them for a more contemporary audience,” said Alexander. “I’ll do something in my show where I’ll make a glass of milk disappear in a baseball cap, reminiscent of the iconic disappearing hat trick of the 1930s.”

Nine events throughout 2017 will follow the “Transformation of Vaudeville” show in April and more information can be found at operahouseinc.com.

¯ April 29: Transformation of Vaudeville: A Magical Tribute to McDonald Birch.

¯ July 1 – Phil Dirt and the Dozers will coincide with the McConnelsville bicentennial celebration.

¯ July 8: Shades of Blue and Grey: Ghost Stories of the Civil War will coincide with the 30th anniversary of the Morgan County Civil War re-enactment.

¯ Sept. 30: A Force of Nature: Theodore Roosevelt and the formation of the National Park System.

* For more information or to purchase tickets visit operahouseinc.com.