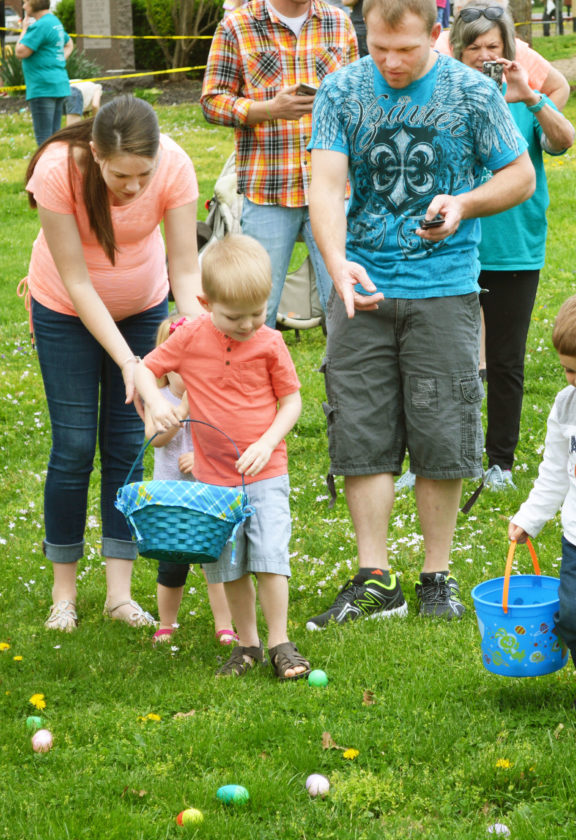 DOUG LOYER Special to The Times Alisha and Mitch Klintworth of Waterford walk behind their children Emma,1, and Gavin, 3 during the Easter egg hunt.

Ready … set … gone! A slew of Easter eggs were scooped up quickly by smiling children Saturday during the Annual Beverly-Waterford Easter Egg Hunt. The event held at Dodge Park in Beverly was sponsored by the Beverly Lions Club and the Muskingum Valley Leo Club.

The Easter egg hunt was divided into three groups, Pre-K, K-1 and grades 2-4. Special prize eggs were amongst the other eggs and, if found, were traded for special prizes. All children were given bags of candy following the egg hunt.

“The Lions Club has done this Easter egg hunt for many years,” said Kay Shreve with the Beverly Lions. “It really makes us feel good to do this for the kids.”

The Beverly-Waterford Easter Egg Hunt is just one of several things that the Lion’s Club does for the community.

“We’re fans of today’s event,” expressed Walsh. “We love to bring the Leo Club members out to volunteer and spread the eggs out and watch the kids gather them.”

“It’s a good community event for the Leos to help out,” added Heather Mahoney.

The local Leo Club also had a fundraiser during the Easter egg hunt by selling baked goods and raffles for baskets and other items. Money raised goes back into their community in positive ways such as BrAva, pilot dogs, scholarships and other worthy projects. If interested in joining, visit e-leoclubhouse.org/sites/muskingumvalley/ for more information.

“I really like being in the Leo Club because you can help people,” admitted Leo Club member Anah Mahoney. “It’s very fun to put all the eggs out and then to see the kids’ smiling after they get candy and prizes.”

“I love helping out people, I think the Leo Club is awesome,” said member Wyatt Patterson, 16, of Beverly. “I did the Easter egg hunt when I was younger. I think the kids will have fun.”

It was a busy day for the Beverly area. Earlier that morning, the American Legion Auxiliary Post 389 had their 15th Annual Bunny Hop 5K Run/Walk. 452 runners and walkers participated in the 5K that started at Fort Frye High School and weaved throughout Beverly and then back to the school. The money that was raised during that event goes toward a great cause. 50 percent will go to the fire department and E-squad and the other 50 percent the Auxiliary will use for local projects in the Beverly/Waterford area. The Bunny Hop 5K and the Beverly Easter Egg Hunt are always on the same day, the Saturday before Easter.

“My favorite thing about the Easter egg hunt is finding the eggs and seeing what’s in them,” proclaimed Jonathan Weaver, 7, of Beverly. “The best thing to do is just take off and start grabbing them!”

“This is his fourth year,” said Rev. Matt Weaver of the Beverly United Methodist Church. “Our son has enjoyed it immensely,”

His wife, Aimee, said the their son Jonathan has really been looking forward to the event and wouldn’t let them forget about it. She commented that the Easter egg hunt is also a social event explaining that Beverly is a very wonderful, active community.

“I’ve been bringing the grandkids here for about five years,” stated Baker. “We love this event.”

“The candy is the best part,” said Maycie, “And picking up the eggs!”