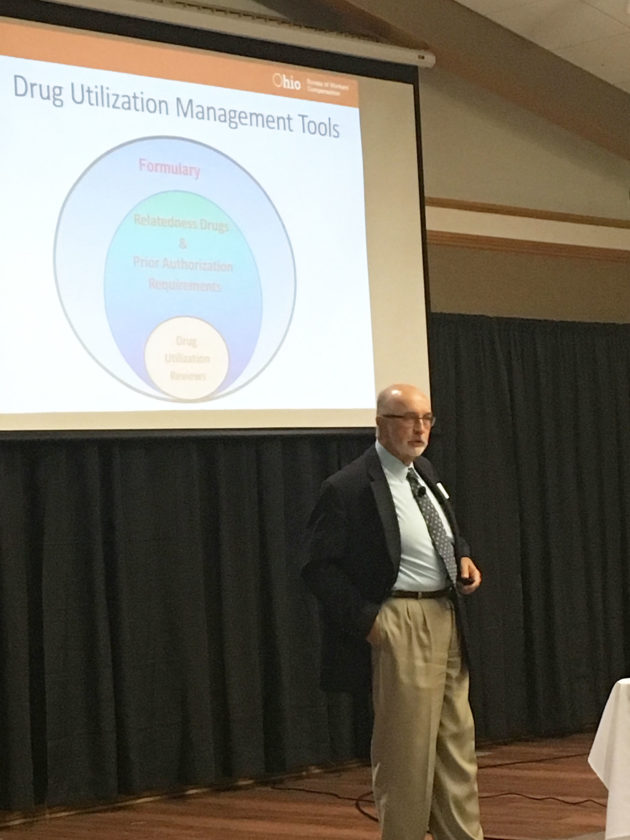 Bob Hanna, pharmacy director of the Ohio Bureau of Workers’ Compensation, speaks to a group of Marietta Area Chamber of Commerce members Wednesday. The bureau is working to decrease the number of opioids prescribed to injured workers. ERIN O’NEILL The Marietta Times

An Ohio agency is taking steps to reduce the number of opioids that are being prescribed to injured workers in the state.

John Hanna, pharmacy director of the Ohio Bureau of Workers’ Compensation, spoke to a crowd of roughly 100 members of the Marietta Area Chamber of Commerce and the Mid-Ohio Valley Safety Council (MOVSC) Wednesday at the Marietta Shrine Club. Hanna is retiring Sept. 29 and shared the spotlight with Nick Trego, pharmacy clinical operations manager, who will be taking over as director.

“We are the most medicated society in the history of the world,” Hanna said. “The average American is on four prescriptions a day and we do have an over-medication problem…just look at all the commercials during the evening news.”

The bureau began making changes to its formulary program in 2011. Much of a slideshow presented at the meeting focused on those changes and the effects the rulings have had on reducing opioid dependency.

Some of the changes include implementing a database for assessing opioid usage for an individual patient, covering naloxone products for overdose prevention, as well as paying for addiction treatment and recovery, stopping coverage of use of concurrent immediate release opioids and of post-op use of sustained release opioids, as well as eliminating many name brand drugs in favor of generic.

BWC is also adhering to FDA guidelines restricting dosages. For example, 244 workers in Ohio were being prescribed between 4 grams and 7 grams of Tylenol a day, something which could lead to liver damage. The FDA, and now the BWC, limits that to 4 grams.

Since the program started, there are 44 percent fewer injured workers using opioids and the cost of opioids is down $22 million. Other issues that workers who file a workers’ comp claim may deal with are muscle relaxants and anti-ulcer medications, stemming from overuse of drugs like naproxen (Aleve) and acetaminophen (Tylenol).

“Workers’ Comp is only a slice of the pie when it comes to these injured workers’ medications for all their other health problems, but all those medications can interact and affect each other. So we want to implement a plan for a pharmacist to go over all (the worker’s) medications and get them off duplications or medications that interact and cause bad side effects,” Trego said.

Carrie Ankrom, president and CEO of the Marietta Area Chamber of Commerce said the feedback at the luncheon was really positive.

“People said they were very impressed with all the beneficial information and that they would go back to their businesses and let them know all the changes that are happening,” Ankrom said.

Small business owner Peggy Byers, who is also the deputy director of the Washington County Board of Elections, said she found the discussion very enlightening.

“It sounds like we all need to be much more educated to know what’s out there and what’s going on,” she said. “I did feel like I learned a lot today. It’s a complicated issue but there are always points you can take away.”

For Hanna, originally from Highland County, a county that has been hit hard by the opioid epidemic, educating people is a big reason why he brings these discussions to different groups. 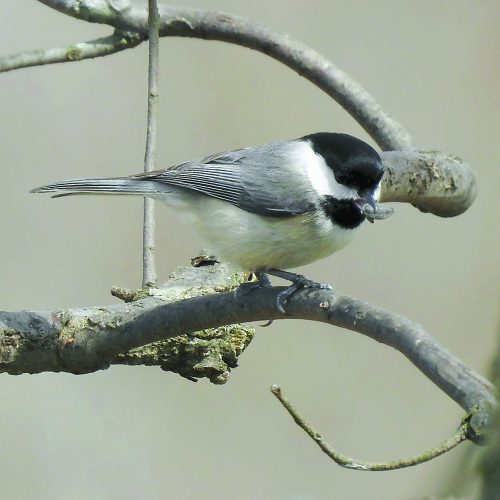 PARKERSBURG — Local chefs are bringing their culinary expertise to a fundraiser this month to support the West ...

The First Unitarian Universalist Society of Marietta is opening its doors the third Saturday each month to share ...

Area agencies have begun signing up to participate in the proposed senior living center near the Washington County ...

Parkersburg, W.Va. – WVU Parkersburg's own, Rachael Flanagan, has recently been accepted to the Disney College ...