A DAY IN THE LIFE: Collecting trash

It’s a big job in Marietta, and the work has some perks 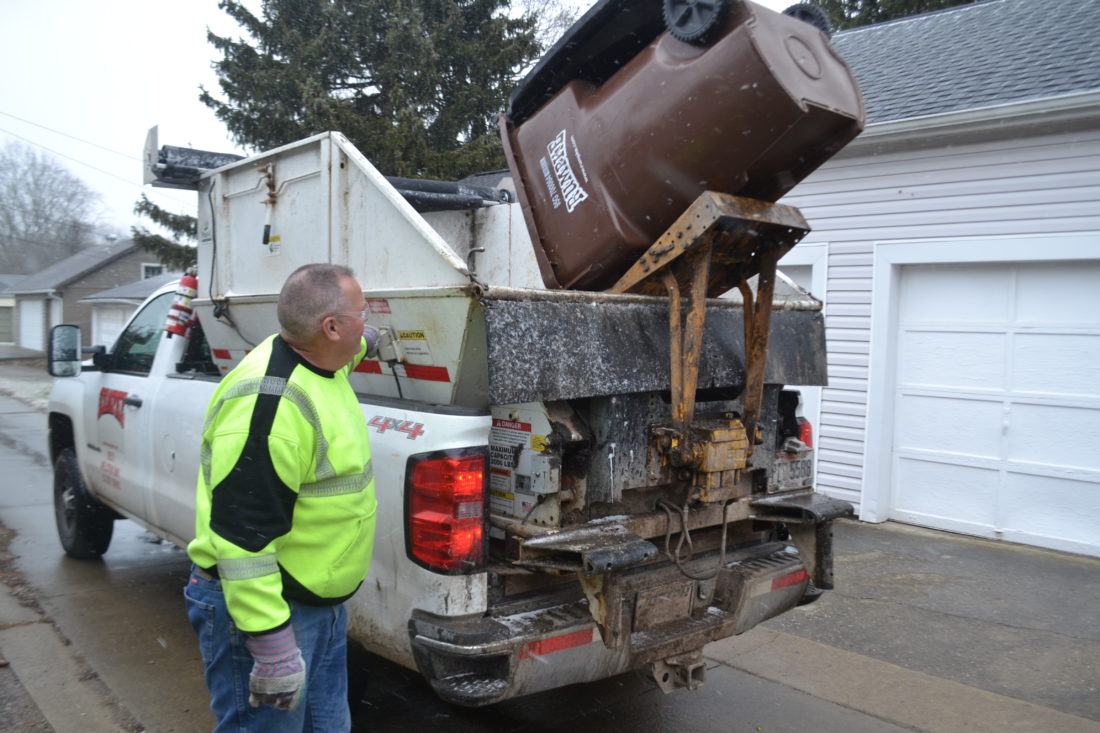 MICHAEL KELLY The Marietta Times Rumpke driver Jeff Dixon operates a lift to tip the contents of a residential trash bin into the hopper on the back of his truck in an alley near Seventh and Montgomery streets in Marietta,

Jeff Dixon starts work at 4 a.m. and keeps going until the garbage is gone.

Dixon, 49, commutes from Jackson to Marietta to begin his workday. He’s the one driving the Rumpke pickup truck with a hopper on the back, maneuvering through the narrow laneways and alleys, festooned with low-hanging power lines, that bigger trucks can’t get into.

He might be from Jackson, but he probably knows the intimate byways of Marietta better than many who live here.

He recalls a friend who hired on with Rumpke and had lived in Marietta all his life.

“He told me he saw parts of Marietta he never knew existed,” Dixon said. 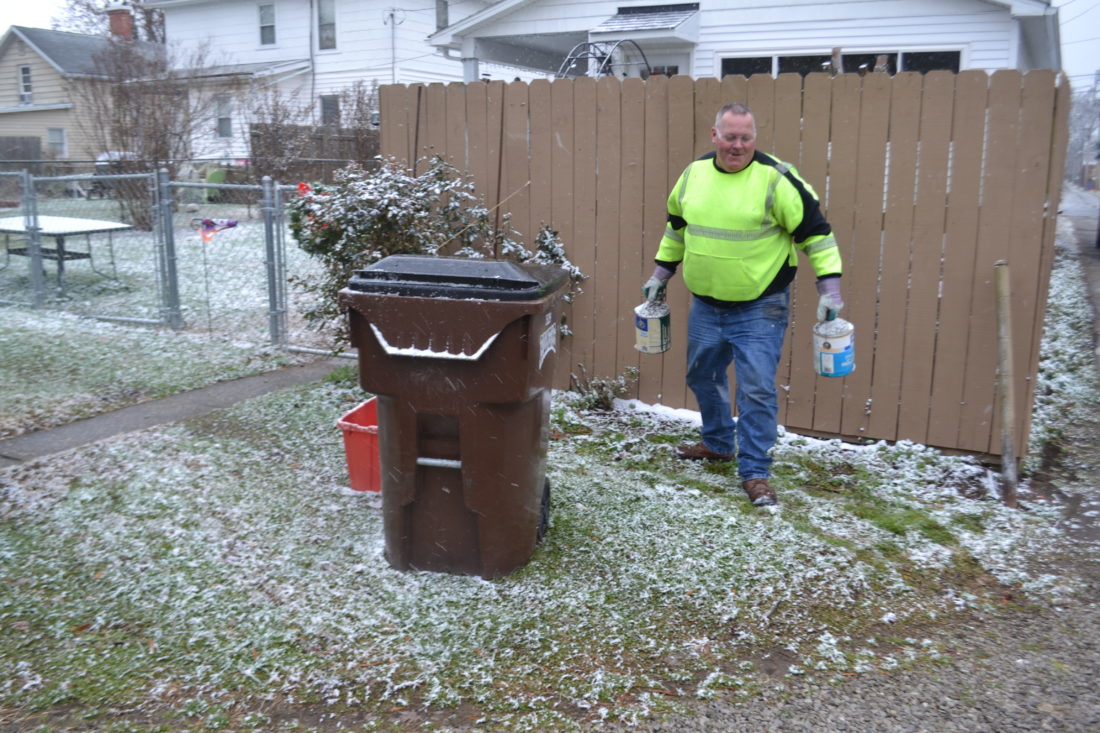 Tooling slowly down alleys in central Marietta on Tuesday morning as flurries of snow blew past, Dixon was perpetually stopping and starting, getting out of the driver’s seat at every house, emptying the big brown bins — sometimes tossing bags out of them, other times using a hydraulic lift to dump the containers — and then moving down a few feet to the next one. He does each route twice, first picking up recycling, then the ordinary garbage.

A red box in the middle of the alley stopped him between houses.

“The wind got me on that recycling bin,” he said with smile and got out to move it, then drove another few feet to another brown trash can.

Dixon said he’s been working for Rumpke for 16 years, the past several driving the small truck in Marietta. He had been an over-the-road commercial trucker, but being off in the far parts of the country much of the time kept him away from his family.

“I started looking for something where I could be home every night,” he said. Rumpke provided that opportunity. When the chance to drive the Marietta route came open, he took it and got to drive the smaller truck. 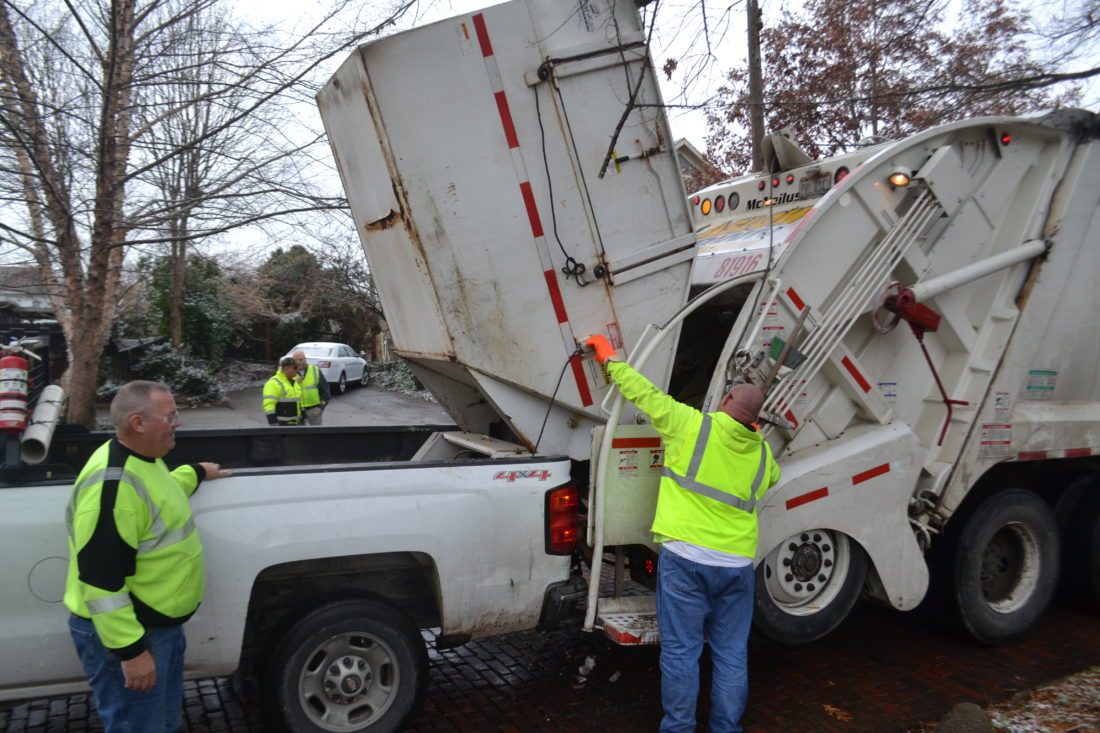 “It’s a lot less demanding, especially getting in and out,” he said.

He’s gotten to know his customers.

Picking up nearly a dozen paint cans set out behind one house, he said the resident had asked him the week before about getting rid of paint.

“I told him, dump some cat litter in it and you’re good to go,” he said. “You can tell who’s doing remodeling.”

He can also tell who’s got kids by what gets thrown away. Others are puzzling until he gets their stories. 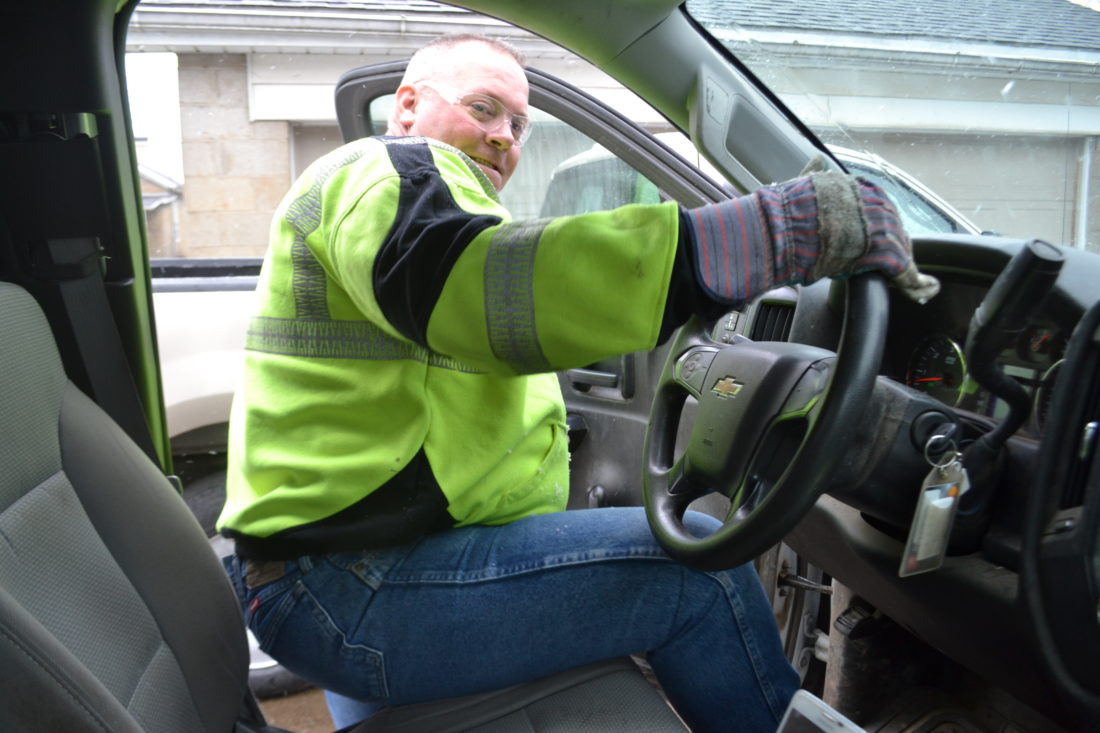 “I’ve got one customer who wanted her bin left in one special place, but it looked like it was a farther walk for her to get to it,” he said. “Then I talked to her one day and she explained that her cat uses it as a platform to get into the house.”

The work has its problem-solving side as well. He remembers a woman from Tennessee visiting relatives in Marietta who inadvertently left her debit card in a shopping bag and threw it out with the trash.

His most vivid memory is the day a tree fell on his truck. A bright, warm, windless summer day — the tree was just ready to go. It hit the cab, smashing the passenger’s side, but a slight curve in the trunk and a branch that propped it up when it hit the pavement kept him from being seriously injured.

“When the fire department came, one of the guys said, ‘The next thing you need to do is head down to Speedway and buy a lottery ticket.’ It was a lucky day for me,” he said.

Once the pickup hopper is full, he uses his cell phone to contact a driver with one of the big compactor trucks nearby. The two meet on Seventh Street near Montgomery. Dixon backs the pickup to meet the back of the larger truck and operates the hydraulic system to dump the load into the maw of the compacter. He and an operator from the big truck use shovels to clear a small spill of debris on the pavement, then they move on to the next part of their routes.

The worst part of the job?

“The weather,” Dixon said. “All that starting and getting stopped in four to six inches of snow.”

“Getting to know people, meeting the customers and talking to them,” he said.

Dixon is one of 10 drivers with Rumpke for the Marietta routes, Rumpke communications director Jonathan Kissell said. The company was founded by William Rumpke in 1932 and is still owned and operated by the family, Kissell said, with 75 family members in its workforce covering four generations.

The Rumpke operations for Marietta are based at the company’s plant in Wellston, 75 miles west of the city.