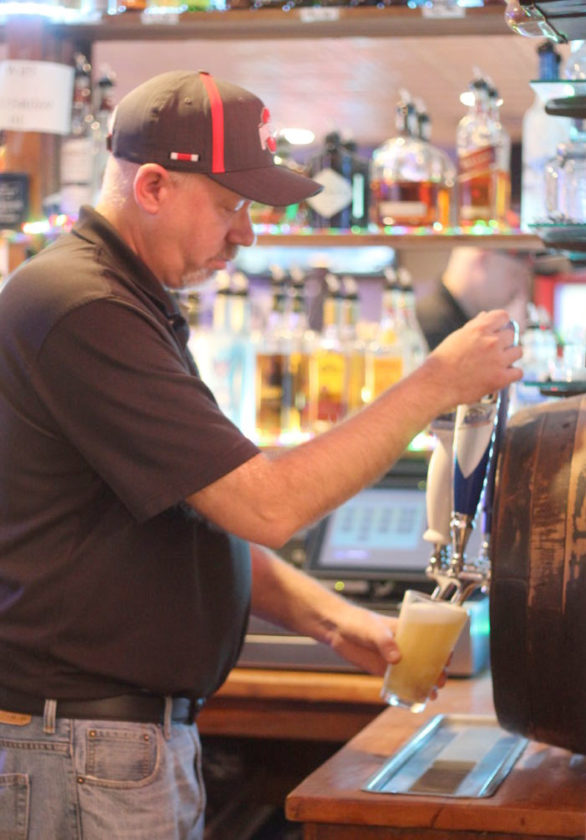 JANELLE PATTERSON The Marietta Times Chad Blair pours a beer behind the bar of the Townhouse in Marietta Monday.

National attention on drunk driving has local law enforcement, residents and business owners talking as a report released by the National Academies of Sciences, Engineering and Medicine calls for a more strict blood alcohol restriction when driving.

The report calls for the limit, currently 0.08 percent blood alcohol concentration, to tighten to 0.05, a move which Utah legislators have passed and which New York lawmakers are already considering.

“I would agree with it,” said Washington County Sheriff Larry Mincks. “Any amount of alcohol can affect you. I’m a believer in no drinking and driving whatsoever. A designated driver is the way to go.”

According to the Marietta Municipal Court, 614 citations under the state impairment law, Ohio Revised Code 4511.19, were filed in the court’s records in 2017.

For that same weight, the individual would reach 0.05 percent with three glasses of the same wine or slightly more than two of the same beers.

The National Transportation Safety Board agreed with the recommendation last week, adding additional recommendations like requiring all those convicted of drunk driving to install a breathalyzer interlock in their car which would prevent ignition without a passing alcohol test.

Chad Blair, a bartender at the Town House in Marietta, said he has taken patrons’ keys before when he’s noticed how intoxicated they have appeared.

“I have no problem cutting someone off or tossing them out if they’re getting rowdy,” he said. “It’s about being aware of it. But we’re not responsible for your choices before you came in here or after you leave either.”

Retired schoolteacher Joe Matheny said he was curious about what science backs the recommendation.

“There are so many factors that go into it, if you’ve eaten today, how much you weigh, that it could be one beer or three depending on the person that puts them over that limit,” he said.

Mary Eddy, owner of the Norwood Tavern, said she’s already dealt with the fallout of the BAC level lowering a decade ago from 0.1 to 0.08 percent.

“I think it’s going back to the days of the prohibition,” she said. “What I would really like to see instead is some Uber drivers in this area because the taxi companies can’t keep up. I don’t think lowering (the legal BAC level) by just a little will make that much of a difference on safety on the roads. But it’s going to be tough on Marietta.”

Marietta Police Chief Rodney Hupp said in his career as a police officer he has seen how stricter drunk driving laws have affected the town.

“There used to be 17 bars in Marietta,” he said. “There’s no question the drunk driving laws have seriously impacted the businesses… Compared to what we used to see on drunk driving accidents and arrests there aren’t as many, but there’s also not nearly as many bars.”

Hupp said he questions whether enough research has been done on actual impact of lowering the limit.

“Personally if I have something to drink I don’t get behind the wheel… I try to be a responsible individual. But I’m not sure lowering the limit is an effective way to lower deaths from alcohol-related accidents,” he said. “There may be more effective ways of addressing this like looking at ignition locks and changes to requirements for repeat offenders.”

Nathan Matheny, co-owner of the Town House, said he recognizes the role restaurants like his can play and how they can be viewed as responsible when alcohol is involved.

“It’s our responsibility to know, or at least watch where people are at when they walk in until when they leave,” he said. “And to make the call to cut somebody off or offer to call a cab.”

Hupp said regardless of personal feelings, his department and other local agencies are bound to enforce the laws passed down from legislators in Columbus and in Marietta.

¯ Since 1982, one-third of all traffic fatalities have been due to alcohol-impaired driving.

¯ The National Academies of Sciences, Engineering and Medicine and the National Traffic Safety Board have both published recommendations for lowering the blood alcohol concentration percentage to legally drive from the current 0.08 to 0.05 percent.

¯ To read the full report from the National Academies of Sciences, Engineering and Medicine visit: http://bit.ly/drunkdrivereport.

¯ Variables: amount of consumption, percentage of alcohol per drink and weight of individual.