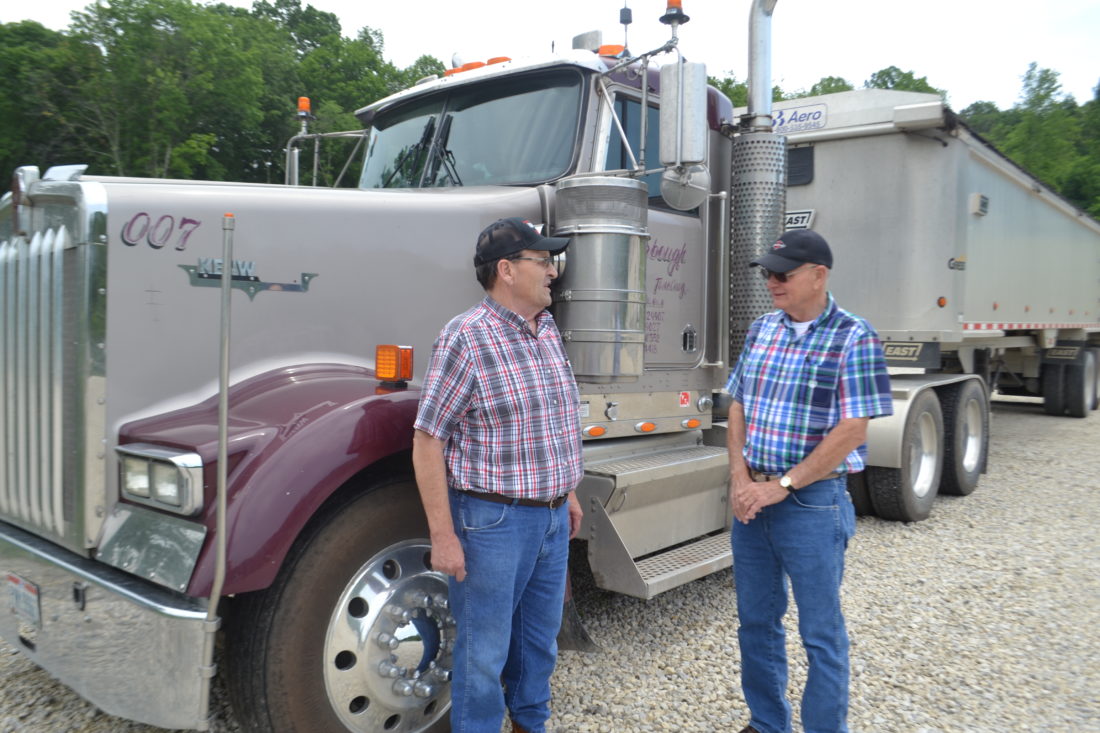 MICHAEL KELLY The Marietta Times Rodney Rohrbaugh and Richard Rutherford talk next to a sand and gravel hauling truck in Rorhbaugh’s yard near Caldwell Friday. Although the unemployment rate in Noble County is high, the trucking firm owners say they can’t find enough workers to drive their rigs.

CALDWELL – The first businesses that come into view after the off-ramp from I-77 in this Noble County community are a Pilot truckstop and a McDonald’s restaurant, both bearing prominent signs that read “hiring.”

The county that ranks third in the state in unemployment – the official rate in April was 6.4 percent – paradoxically is experiencing a labor shortage.

Misty Wells, executive director of the Ohio Job and Family Services offices there, said the unemployment rate is something of a mystery.

“The McDonald’s sometimes doesn’t open mornings except the drive-thru because they don’t have enough people. I get someone looking for truck drivers every day, and construction companies are always looking for people,” she said.

The Marietta local of the Plumbers and Pipefitters has offered apprenticeship programs – free training, good money to start out, no college debt – but only three applications were made, she said. The program included an option for juniors and seniors in high school that would see the student graduate with a trade. Apprentice plumbers and pipefitters start at more than $16 an hour, while they’re being trained. 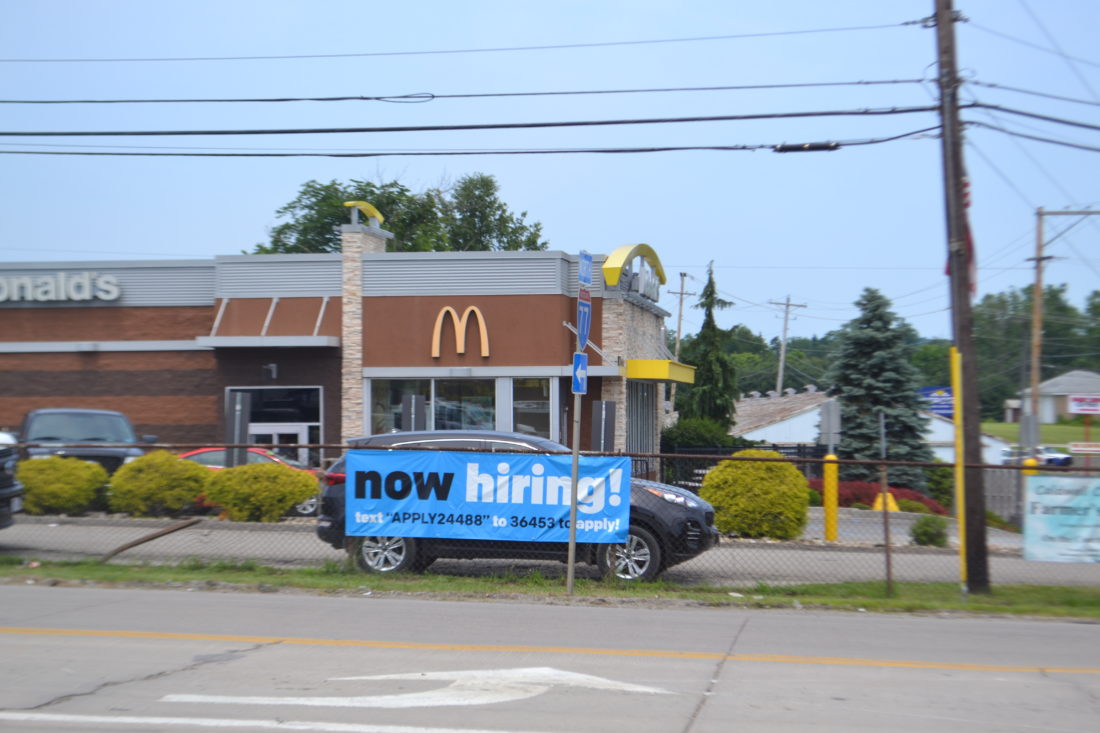 Aramark, which has a plant in Noble County and does food preparation for the state prison there, is perpetually hiring, Wells said, with jobs that start at $12 an hour.

“A few years ago, it was awful,” Wells said, describing the employment picture in the county. “But now, if you want to work, you can.”

There is nobody in the county, she said, on cash assistance from the government.

At a recent job fair held at the Job and Family Services office on Marietta Road north of Caldwell, several employers were there to recruit but only 10 people showed up, she said.

The office also can help people find jobs outside the county, like at the Walmart in Cambridge, which she said pays $11 an hour for starting help. The town has a park-and-ride lot next to the I-77 offramp for people who carpool for commuting to out-of-town jobs.

Although it would appear the county suffers from unemployment, its average household income according to the 2016 American Community Survey was more than $40,000, and Wells said most of the schools in the county can’t get enough registrations for the federal free lunch program to qualify as Title I schools. Her office has a clothing voucher program, but the response to it has been tepid.

“We had less than 200 people apply for it, and I really had to work to get that many,” she said.

West of I-77 on Ohio 78 sits Rodney Rohrbaugh’s trucking complex, with a maintenance and office building put up in 2015, more than 10,000 square feet, still looking sparkling new.

“I’ve got enough work available that I could buy more trucks, I could hire six people, but I can’t buy them and just let them sit here,” he said.

What’s holding him back is lack of drivers.

“It’s quite an ordeal finding qualified drivers,” he

Rohrbaugh, who is 67 and sometimes drives himself, said he employs about 30 people, and their average age is about 60.

Richard Rutherford of R.J. Wright and Sons, said his firm has the same difficulty.

“Most of the people who want to work are already working,” he said. And he admits truck driving isn’t something that will appeal to everyone, even though it pays well – he and Rohrbaugh said driver wages range upward from $18 an hour.

“Not everyone is cut out to drive a truck,” Rutherford said. “That’s an 80,000-pound vehicle going down the road, it’s a lot of responsibility.”

Drivers, particularly those who transport hazardous materials like crude oil and other petrochemicals, need to pass background checks and periodic random drug tests as well, he said, which can eliminate many prospective candidates.

Although being third in the state for unemployment sounds dismal, the size of the Noble County population can lead to a misleading impression of the severity of the unemployment problem.

Bret Crow, a spokesman for Ohio Jobs and Family Services in Columbus, said Noble County’s labor force is among the smallest in the state – 4,700, compared to one of the state’s largest, Franklin County, which has 685,700 – and small swings in the numbers of unemployed workers have an outsized impact on the unemployment rate, he said.

Additionally, workers who become unemployed aren’t required to take any job that comes along.

The prior training and experience of workers has to be considered in determining what work is suitable, and they are not expected to accept work outside their normal expertise that pays significantly less than their usual occupation, according to an email from Jobs and Family Services.