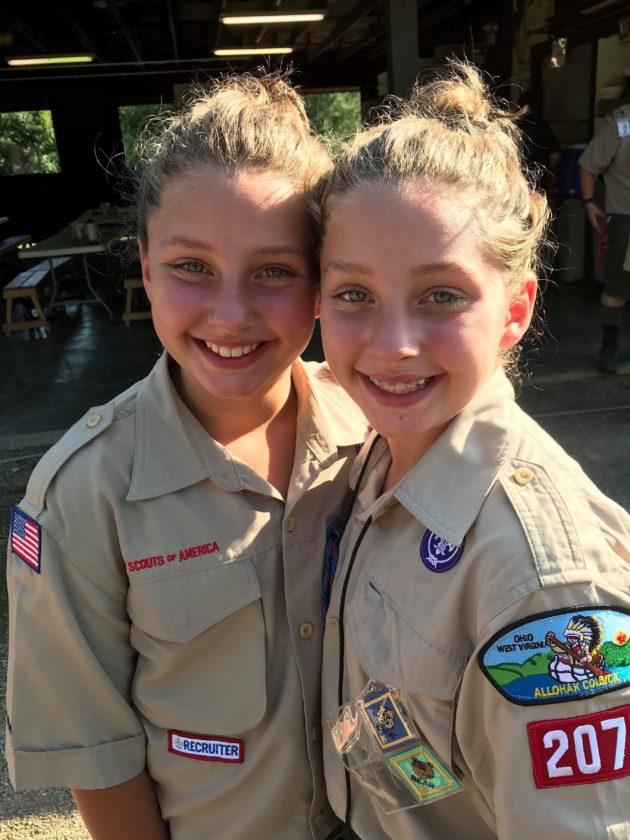 Photo courtesy of Julie McCombs Twins Adele, left, and Maevry McCombs, right, were the first girls to join Pack 207 in the local Boy Scouts of America program this year.

Photo courtesy of Julie McCombs Twins Adele, left, and Maevry McCombs, right, were the first girls to join Pack 207 in the local Boy Scouts of America program this year.

The scouting motto is to be prepared.

And now that school is back in session and the hard push to recruit new cubs to the scouting program has begun, this year leaders are prepared to serve a wider audience of both genders.

“I had my first girls join back in the winter as soon as they were allowed, but we are ready for more to build the family program,” said Tony Durm, committee chairman of Pack, Troop and Crew 207. “On paper we have a both a boy den and a girl den and I have separate leaders for the girls but when they go out and do den activities they do them together.”

Last year the Boy Scouts of America announced the Family Scouting program as an initiative to bring girls into the fold of the organization.

It was launched as a way to allow all members of the family, from kindergarten age and up, to join in the fun, as activities for Boy Scouts traditionally have been a bit different than those for Girl Scouts.

So now as early as kindergarten, boys and girls may join the pack, becoming lions, tigers, wolves, bears and weblos within the pack.

Twins Adele and Maevry McCombs, 9, of Marietta, were the first girls to join Pack 207, both excited to finally participate in what their brother got to do for years before them.

“At all of Henry’s meetings the girls were dying to participate,” said the twins’ mother, Julie McCombs. “And even though we’ve gotten a little negative feedback from some people saying boys and girls shouldn’t be together, I think in 10 years people will forget about it and it will just be scouting.”

And with a universal motto, one without gender or basis in religion, the point of preparedness lays outside just the scope of tying knots and building fires.

“Sure, that’s how you recruit young boys to be a Cub Scout, you get to come build fires, shoot guns and arrows from bows and you get to go camping,” said Eagle Scout father Joe Wesel, of Marietta. “I don’t know if they can really call it ‘Boy’ Scouts anymore, but that’s just fine.”

Wesel’s son Jackson is completing a service project putting in water fountains at both the East Muskingum Park and the Settler’s Bank Adult Park on Front Street in Marietta.

“But that’s what appealed to us as parents, that it builds character and encourages our sons to be better citizens and serve the community,” said Amanda Parman, of Marietta, who is the new member coordinator for Pack 207.

Being a better citizen is just as universal as the activities the twins have always wanted to participate in.

“We always wanted to shoot bow and arrows and paintball too,” said Maevry.

“I wanted to be a scout because they did the outdoor stuff and also the cooking, they taught me (this summer) how to use a knife and how to build things,” added Adele.

Adele was quick to list off the attributes she’s memorized with her sister, and the mantra the girls hope to live up to as scouts.

“Thursday nights we learn about the life skills but it’s through things like crafts and projects, it’s always fun,” added Maevry.

The pair were the first girls to attend the Seven Ranges scout camp this summer and plan to recruit more of their friends, of all genders, to participate.

“I don’t like how people say boys are stronger and can do more things,” said Adele. “I can do just as much and we can have fun.”

The National Executive Board of the Boy Scouts of America has also confirmed a scheduled Feb. 1, 2019 launch date for the program to serve girls, ages 11-17.

“That we were excited to hear too,” said Julie McCombs. “We were worried if we started our girls in this program if they’d be able to continue.”

As far as logistics, parents of boys and girls joining locally say they are ready to build up a program that’s inclusive and safe for both.

“Girls were already a part of scouting overseas, and had adventure crews going whitewater rafting and things here,” said Wesel. “This allows you to mold the child’s character from early on… There is a pride in being a parent of an Eagle Scout.”

• Elementary-age children in kindergarten through fifth grade are welcome to join Pack 207.

• Cub Scout meetings take place on the first and third Thursdays of each month at the American Legion in Marietta.