Proposal would raise tobacco use to 21 years old 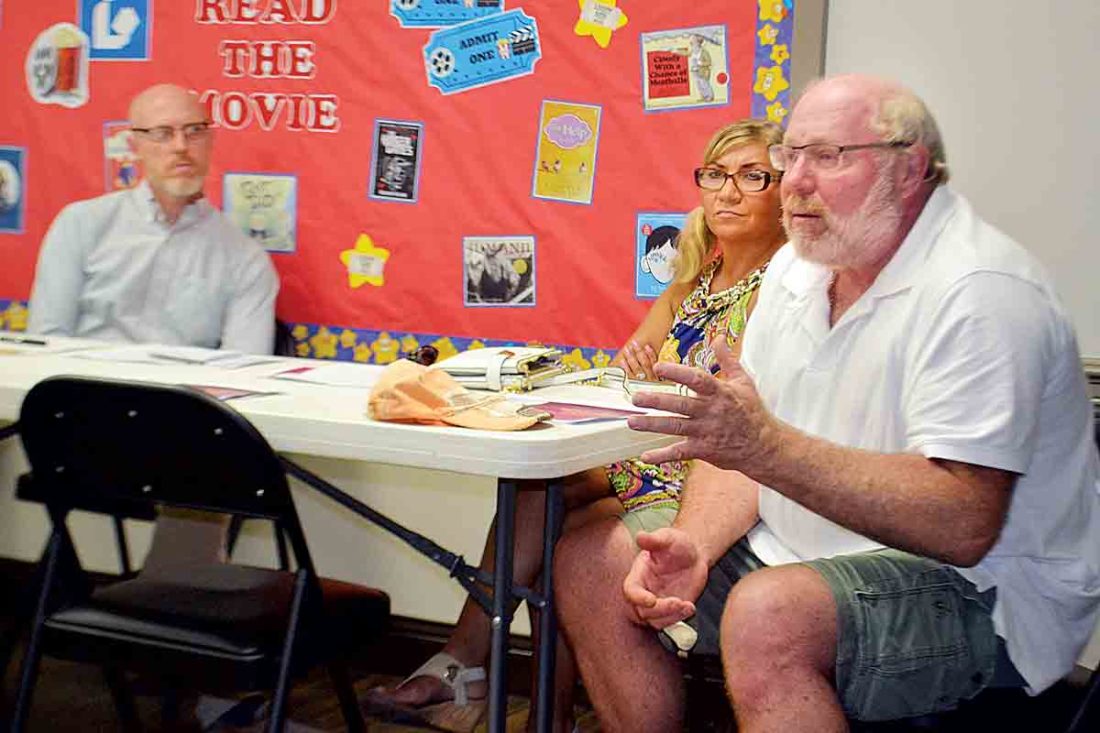 Chip Coffin, sitting next to Marianella Shawver, makes a point at a public forum Thursday in the Washington County Library on the proposal to raise the legal age to buy tobacco and nicotine-containing products to 21. (Photo by Michael Kelly)

Tobacco 21 is looking down the road, so to speak.

When people begin smoking at a young age, they are more likely to acquire a lifelong addiction, according to medical studies, and Washington County Health Commissioner Dick Wittberg believes that raising the minimum age for legal tobacco purchase from 18 to 21 will have long-ranging impacts on the health of Washington County residents.

Tobacco 21, being overseen by the health department’s tobacco prevention coordinator, Stephanie McPeek, held public forums Thursday in two locations, the health department offices on Muskingum Drive at 1 p.m. and the Washington County Library main branch at 4 p.m. The gatherings followed a public survey – which is still available for anyone who wants to have input on the issue – and precedes meetings with city and village councils and township trustees around the county.

Although it is a county-government based effort, the enactment of the ordinance is up to local authorities within the county, which complicates the effort even though there appears to be widespread support for it.

Wittberg said at the early afternoon forum Tuesday that survey results show about 75 percent support for the change and McPeek said about 335 surveys had been returned.

The ultimate goal of raising the age, Wittberg said, is both to restrict access for young adults and in turn to reduce the number of smokers in the county among generations to come.

“Ninety percent of adults who smoke say they started before they were 21,” McPeek said.

Wittberg said most youth who are underage smokers under current law got their cigarettes or other smoking materials from acquaintances between the ages of 18 and 20 because those are the people they know and socialize with.

“If you start smoking when you’re 14, you get your cigarettes from somebody between 18 and 20,” he said.

But for middle and high school age students, and even those of early college age, the concern is not cigarettes, which have become increasingly unpopular. The problem is e-cigarettes and vaping products.

Her analysis was echoed at the library forum later in the afternoon, where Marietta City Schools Superintendent Will Hampton said vaping devices, particularly Juul, a brand that comes in a compact device that resembles the USB drives commonly used as mass-storage plug-ins for computers, are a problem in schools.

“E-cigs are big, and my school administrators tell me they are collecting at least one every week,” he said. “The Juuls, they’re easy to conceal.”

Hampton said he supports the proposal.

“When you’re 18, you’re just not equipped to make these decisions,” he said in regard to smoking.

Chip Coffin and Marianella Shawver, who operate the Tropical Oasis Smoke Shop and Hookah Lounge on Front Street, said their customers are mainly young people looking for a social experience. Both attended the second forum.

Coffin noted that their products contain a very small amount of nicotine, and they have a mixture available, made of sugar cane leaves and molasses, that has no nicotine or tobacco products.

“Obviously we have a vested interest, but we can get around that by using the herbal mix,” Coffin said. “We’re here because we think there are ramifications to this. We’ve seen what’s happened for these kids, and we think if they’re shut off cigarettes, they might turn to alcohol or medical marijuana. I think that needs to be addressed.”

Coffin said the advent of prescription marijuana extract will open the possibility that 18-year-olds could get prescriptions and share them with underage companions.

Shawver said her experience matched Hampton’s in regard to electronic cigarettes. Although customers are not allowed to use vape rigs inside the lounge, she said she often sees them outside vaping but rarely sees them smoking cigarettes.

“The tobacco industry is aware that more people trend onto cigarettes than off them from e-cigarettes,” Wittberg said.“It’s just a new way to target 14-year-olds to become lifelong users.”

Coffin and Shawver said although an ordinance raising the age to 21 might impact their business, they believe that their clientele, 80 percent of whom are under 21, come to the lounge for a social experience.

“They tell us that authorities keep targeting their age group, that they can be in the military or tried in court as an adult but can’t drink,” Coffin said. “It’s a place for them to hang out, they enjoy the hookah like older adults enjoy social drinking, it’s a fun place where they can feel young with people their age, sometimes they get coffee instead of smoking.”

He told the panel that the lounge could probably switch to non-nicotine smoking mixtures without appreciable impact on its business.

The trend toward local and state governments raising the legal age for tobacco purchases, including e-cigarettes that contain nicotine and other tobacco ingredients, has gathered momentum nationwide, with six states and more than 340 local governments in which 21 is the minimum purchase age. The first locality to enact such an ordinance, Needham, Mass., did so in 2005 and saw a 50 percent reduction in under-21 smoking after a few years.

According to Census figures, about 2,500 people age 18-20 live in Washington County. Wittberg said the health department has identified about 68 retailers in the county who are tobacco vendors.

He said the survey will continue – anyone interested in taking the two-question survey can find it on the home page of the Washington County Health Department, washingtongov.org/health. The Tobacco 21 group will continue meeting with city and village councils and township trustees to gauge support for the effort, Wittberg said, but strong public support should make it fairly easy for councils to pass an ordinance.

“I look at the statistics, kids in this county smoke at three percentage points higher than the state average,” he said. “The only thing I know to address that is to raise the legal age, and the evidence is that it has a large impact.”