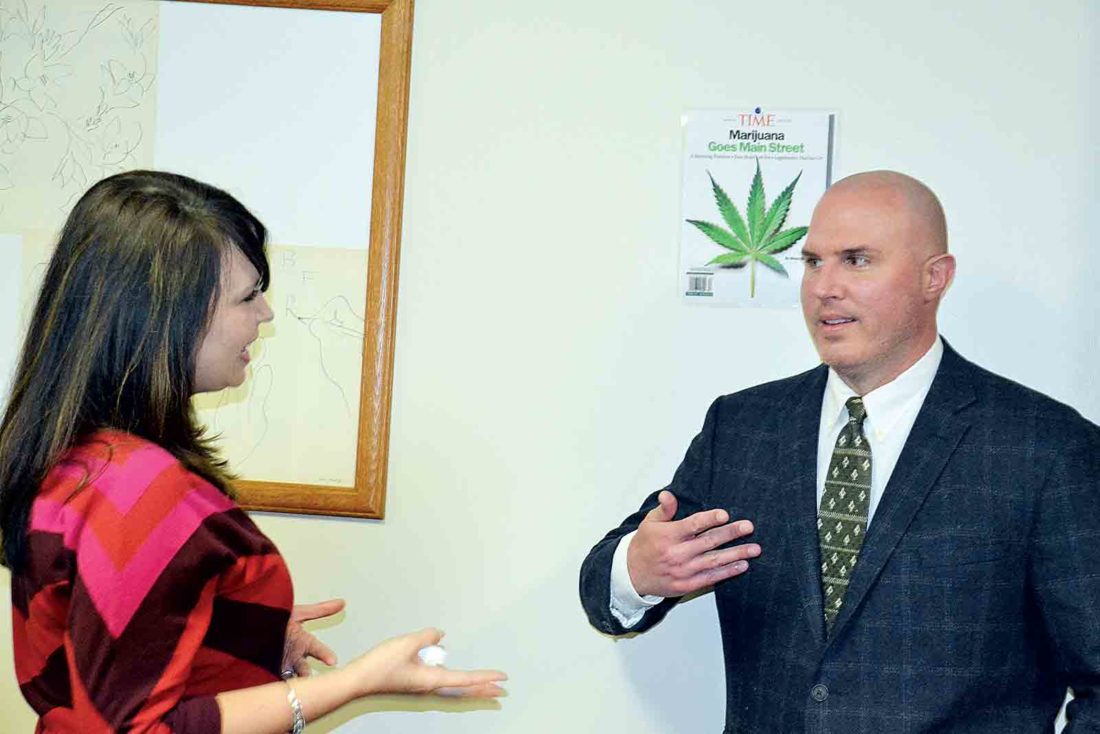 Dr. David Spears and Jessica Spears, his wife, talk following an open house Thursday night at the Compassionate Care Clinic in Devola. The event, which attracted about 25 people, introduced the first clinic in Washington County that will issue certificates of recommendation for medical marijuana. (Photo by Michael Kelly)

DEVOLA – The open house for Washington County’s only clinic to evaluate patients for medical marijuana treatment also was a full house.

Held in what used to be a waiting room for a Memorial Health Systems clinic, the meeting attracted about two dozen people interested in what comes next in the availability of what for Ohio is a new branch of medical treatment.

Dr. David Spears, who has practiced family and emergency and trauma medicine in Marietta for 15 years, is establishing the clinic as a not-for-profit venture while continuing his ordinary medical practice. Spears has said the clinic is intended to accept patients from Washington, Noble and Guernsey counties.

To date, Spears is the only physician in the area who has registered with the state to undertake a medical marijuana practice.

The drug has many applications, but Spears said more than 60 percent of patients in states where medical marijuana is legal take it to assuage chronic, severe, intractable pain, a role in which it has proven effective.

The state has identified 22 conditions for which marijuana preparations can be recommended, and Spears said that like many aspects of the laws that have legalized it, he expects the list to change over time. But the research backing the benefits of marijuana for those conditions, he said, is formidable.

“There are many medications presently being prescribed that don’t have nearly as much clinical proof,” he said. “For chronic pain, its effectiveness is indisputable, and the same with multiple sclerosis.”

He also noted that in states where medical marijuana had become legal, opioid prescribing had gone down an average of 25 percent.

One woman who attended the event but declined to give her name said she suffered from an autoimmune condition that gave her crippling cramps in her legs and a skin deterioration on her hands that made it painful to put the slightest pressure on anything with her fingers. Nothing had helped, she said, until a chiropractor in Florida recommended a salve that included CBD, the non-euphoric chemical in marijuana.

“I started it in May. It cleared up my skin, and I’ve got no cramps any longer,” she said, holding up immaculately groomed fingers.

Mark Morrison, an attorney from Woodsfield, said he underwent deep brain electrode stimulation to treat Parkinson’s disease, a process that involved having holes drilled in his skull to insert electrodes. Medical marijuana treatment for Parkinson’s is being studied after some patients reported decrease of symptoms after ingesting the substance. The American Parkinson Disease Association concluded that further studies are needed.

“I believe 100 percent that I would have benefited from marijuana,” Morrison, who also is Spears’ father-in-law, said. “I think what he is offering is a tremendous service. I don’t see a thing wrong with it.”

Marijuana, despite its proven clinical benefits, has an image problem to overcome and a complex legal history and present. Spears said he has numerous attorneys involved as advisers in the venture as the Ohio law and regulations evolve.

The conflict between state and federal law has made it all but impossible for established medical institutions to become involved in using marijuana as a treatment. Spears said it remains a Schedule 1 narcotic under federal law, which excludes both established pharmacies from dispensing it and hospitals, which operate under Medicare and Medicaid rules, from recommending it.

“The hospital (Memorial Health Systems) has been very supportive of this,” he said. In speaking to the gathering Thursday night, he also noted that in his regular practice with Memorial he cannot recommend patients for the Compassionate Care Clinic, nor can any other physician.

Spears said at this point it is impossible to say even what the treatment, which is not covered by any insurance plan, might cost.

“I said $200 for the initial consultation and $100 for each follow-up, but that I think is at the high end of probability,” he said after the meeting Thursday night. As for what the marijuana itself might cost, he said, “It’s a very reasonable question, but nobody knows. The reality is, we don’t know what it will be.”

Certificates of recommendation – the marijuana dispensed cannot be called a prescription – will provide 90 days of marijuana in a specific form, strength and mixture. Patients who receive a registration card, which is issued by the state and is effective for one year, can have in their possession no more than 90 days of medication.

Spears said it will be important not to make mistakes in the early days of medical marijuana legality in Ohio.

“Doing this as a non-profit really ensures making the right decisions,” he said. “I’ve had many people contact me every day. This is not a substance for many things that people would like for it to be. We have to make sure it’s a safe, positive experience, and it’s not possible to do this ethically and make a living at it. We need to have only the best, positive representative patients to use it.”

It is unknown at this point when dispensaries will open and treatment will become available. Spears said initially the dispensaries will stock only plant material as other forms such as tinctures, salves and edibles are processed.