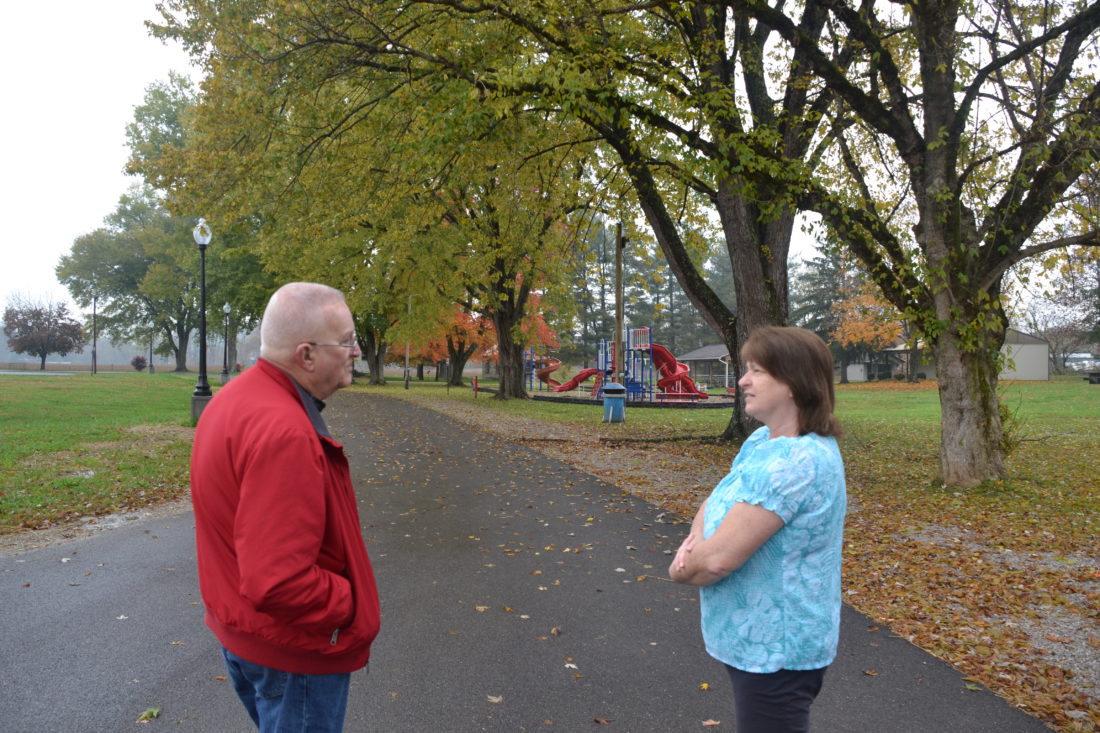 MICHAEL KELLY The Marietta Times Lowell mayor Steve Weber talks to resident Peggy Sloter at Buell Park, one of the village facilities maintained in large part by the local government.

Villages might be the best remaining example of direct democracy, but in Washington County it’s become increasingly tough to sustain that example.

Out of the county’s five villages, two have declined to below 200 residents, two others have fewer than 1,000, and only one has shown any growth over the past 118 years. During the past decade, villages have been hit hard by the state’s reduction in direct funding to local governments, and few people are willing to step in to fill the elected positions required by the state to run them.

Villages can provide services ranging from road repairs and streetlight maintenance to police and fire departments, but over the years since villages were the basic unit of municipal government, services have become increasingly difficult to sustain at that fundamental level.

Steve Weber has been mayor of Lowell, population 539, for several years. Weber, a retired state trooper and former commissioner for Washington County, said declining population and the lifestyle challenges of the times make it hard to find people to serve with small local governments.

A village under Ohio law requires at least five council members, including a mayor, along with a clerk-treasurer and a board to oversee any utilities such as streets, water and sewer, that the village provides.

Weber said the village’s operating budget is about $250,000. It provides, as it can, street repairs, maintenance of facilities such the village park, and water and sewer services.

On a recent November morning, Weber strolled around Buell Park, owned by the village and maintained by its employees, with help from local organizations. Amenities include athletic fields, a playground, a relocated log cabin from the early1800s, a one-room school house and the village swimming pool.

“It’s a lot to mow, a lot to take care of,” he said, noting the village has one employee to take care of maintaining the park and other features. The paved path around the park, on an island in the Muskingum River, is a popular place for walking and running.

Weber is known to everyone in town. As Peggy Stoler got ready to take a late morning walk in the park, she stopped to talk to him.

“Can you do something about those trees on Dixon Ridge?” she said. “They need to come out. I just know one’s going to fall on my car.”

The two continued talking about village affairs for several minutes, then Stoler set off for some exercise.

The village is adding decorative street lamps to the pathway through the park, Weber said.

“Lots of people come down here in the early morning to walk or run before they go to work, and they appreciate the light,” he said. The lamps are being added one at a time as the budget allows, he said. Nodding toward the playground, he added, “We’re going to try to get a grant next year for more play equipment.”

The village is limited in its tax base, he said, which is becoming increasingly important as time goes along. There are few businesses and no appreciable room to expand, with hills on one side and the river on the other.

State funding support for local government has been dwindling rapidly. Adjusting for inflation, in fiscal year 2008, it stood at $2.1 billion; in 2016 it had declined to $1.2 billion, according to the nonprofit Ohio Policy Matters. With that, villages need to depend on local tax bases, which for the most part also are shrinking.

Another difficulty, however, is filling the seats on village councils. In January, Lowell’s council was made up entirely of appointees because of the lack of people willing to stand for election.

“It’s hard to get people to come out and serve,” Weber said. “People are so busy today, they’ve got kids involved in baseball, football, whatever. And it’s a tough job. This isn’t like a city where you’ve got engineers and this and that. I’m retired, and I’m busier now than I’ve ever been. It’s just an everyday battle.”

His fellow mayor in New Matamoras, John Schmidt, took a few minutes Friday afternoon to talk on the phone while putting together a manger scene in his garage.

The population of New Matamoras has barely changed in more than 100 years, with the 1900 Census showing 817 residents and the 2017 population estimates showing 871 people living in the village. Like Lowell, the village is hemmed in geographically by the river and hills, along with surrounding tracts of the Wayne National Forest.

Schmidt said he has never heard even a suggestion that the village, which was established in 1860, should dissolve its incorporation.

But the financial picture for the village, which provides water, sewer and police services, along with road repairs and maintenance, is increasingly perilous, he said, and the state is to blame for that.

“To be honest, the state cut our monies out, took a lot of our funding, and put us in a pretty good bind as far as getting equipment and that sort of thing,” he said. Schmidt said he was trying to figure out how the village could get an expensive replacement part for a salt truck.

At a meeting of mayors he attended in Columbus this month, Schmidt said, the state’s rainy day fund – established by Gov. John Kasich several years ago – came under discussion.

“It’s got billions of dollars in it. We’re not operating a savings and loan bank in this state. Here we are, operating with zero frills, watching every dime we spend. If they’re sitting on that fund, how about releasing some of that money to townships, villages, schools and cities?” he said. “They cut us big time, 50 percent, so why not release that money so we can operate freely and breathe a little?”

The rainy day fund, according to several newspaper reports earlier in the year, held about $2.7 billion.

Kent Scarett is president of the Ohio Municipal League, and he said the villages of Washington County are not alone in their financial problems, nor in their determination to continue to exist.

Out of the state’s 750 municipalities, more than three-fourths are villages, and movements toward dissolving incorporations are rare, he said.

“This year, the village of Alexandria in Licking County was the only one to have it on the ballot,” he said. “It’s had financial issues that have plagued it for quite a while, but when it was put to a vote to dissolve the village, the measure was soundly defeated.”

Villages can be dissolved by a ballot measure or by the state Attorney General for financial malfeasance or insolvency.

A major source of those problems was the state’s decision, led by Kasich, to cut state assistance to municipalities from 3.8 percent of the state operating budget to 1.6 percent as part of a deficit-cutting program shortly after he was elected in 2010. The cuts amounted to $535 million in the most recent fiscal year, he said.

“That has been significant and impactful,” he said. “It’s a type of funding that can be used in any way, an importance source of income, and municipalities are still suffering through that.”

The Kasich administration also eliminated the estate tax, which before it was canceled amounted to $250 million a year for municipalities.

“It was an 80-20 split, favoring the municipalities, so the state had very little skin in that game,” he said.

The cuts came at the tail end of the recession, when communities already were struggling, he said.

In the meantime, none of the expenses born by villages went away. Many resorted to their own taxing authority to make up some of the difference, but municipalities face limits in their ability to raise money that way, and the problem is especially acute for villages, which have a very limited property and income tax base.

“There are about 620 municipalities that have their own income taxes, and by and large those have gone up to offset revenue losses from the state,” Scarett said.

Paradoxically, the revived economy over the past several years has created an additional problem for villages. With unemployment at historic lows, fewer people have the time to devote to village government, and getting residents to run for village councils has been a struggle across the state.

“Sometimes public service is not the first thing people think about, so it’s important for folks to be involved and take those jobs,” Scarett said. “It’s always been a challenge, something communities have always struggled with.”

Another aspect of the economy that has been a trend for decades is corporate centralization, he said.

“In the days of less centralization, the folks in the corporate world also served in the community, but a lot of those populations have moved out of villages, and that’s also had an effect,” he said.

Even so, it’s far from the smallest village in the state, according to the 2010 Census, tied for No. 14 with Antioch village in Monroe County. The state has 636 villages.

Janet Kidd has been the clerk-treasurer of Lower Salem since 1970.

“We seem to have more people than we’ve had for a while, but there are still some empty houses,” she said. “We’re struggling, but we’re making it.”

“We had a wonderful Halloween party at the village hall, with treats for the kids and a band. My son set up a haunted house in his garage, and it was actually pretty scary,” she said.

In Macksburg, there are fewer than 100 dwelling units, occupied by about 180 people, according to 2017 population estimates. The village, which was the location of the first well drilled exclusively for oil back in 1860, had a population of 448 in 1900. The village has three businesses and a struggling government – it was one of those flagged by Ohio State Auditor Dave Yost in 2017 – but carries on.

Nancy Keller has lived in Macksburg for 52 years and once was a member of the village council.

“I feel safe here, never lock my doors, I’ve raised my five kids here, we all get along – or least, most of us – and I like it,” she said.

The village doesn’t have any particular gathering place, she said.

“I was on the council for a while, and we talked about doing stuff like that but never had the money. Now we’re just hanging on by a thread. We don’t even have the money to fix our streets,” she said.

But she enjoys the village life, with many of those who live there being lifelong residents.

“My daughter moved to Oklahoma and lived there for 15 years, but she came home,” Keller said. “My son held a homecoming not too long ago for people from here, and we had 35 or 40 people turn up. Everyone brought covered dishes, we held it at the United Methodist Church, and it lasted quite a while.”

The village for many of its residents means a type of culture engendered by historic ties.

“This property where I live, my first husband, who’s passed away, he was born on this property,” she said.

The villages of Washington County (population)