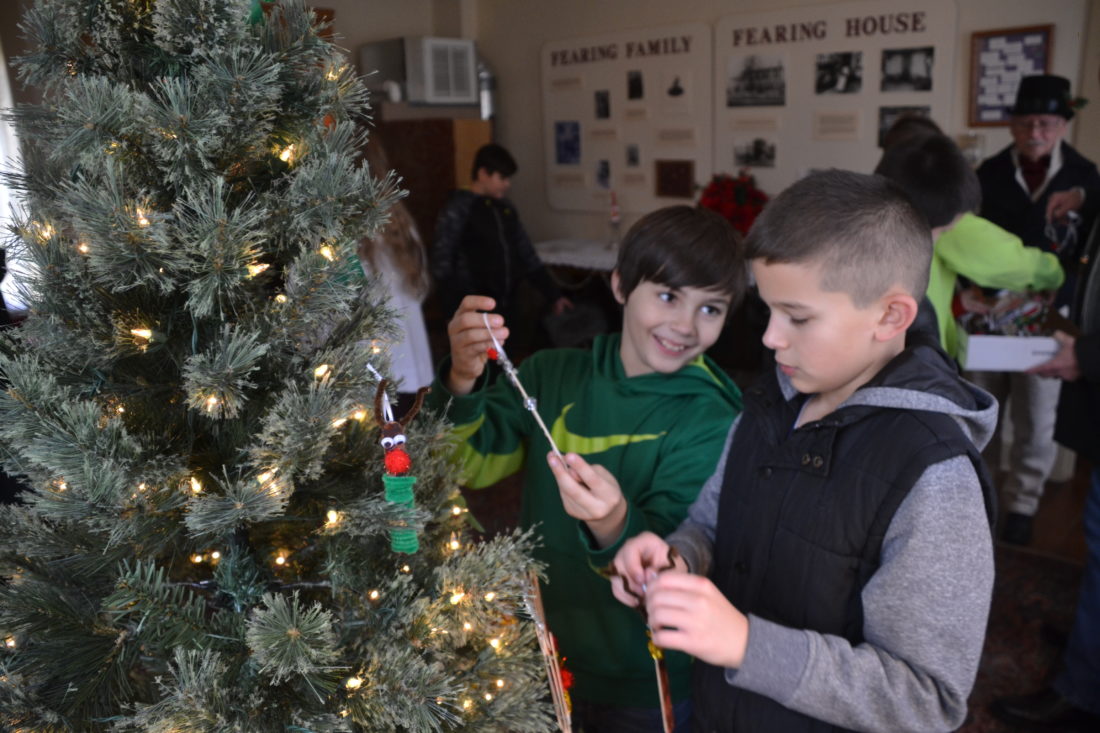 MICHAEL KELLY The Marietta Times Landon Caldwell, left, and Wyatt Bishman hang decorations they made on a Christmas tree at the historic Fearing House on Thursday. The fifth-graders were part of a traditional project at Harmar Elementary School, in which each year the classes hand-craft ornaments and get a tour of the house.

No one is certain when the traditional Christmas connection between Harmar Elementary School and the historic Fearing House began, but fifth grade teacher Todd Caltrider said it was in place when he started teaching at Harmar in 1999.

On Thursday after lunch, a line of about 45 fifth-graders made the short walk from the school to the historic house, which the Washington County Historical Society obtained in the 1970s and restored as a museum. They were greeted by volunteers Glen Wolfe and Mary Jo Hutchinson, both dressed in period costume.

Wolfe took the children to Christmas past, showing them the ceramic “rainbow” nativity set on a fireplace mantel in the parlor, made by children at a one-room schoolhouse near Churchtown.

“There were many of those one-room school houses in our area,” Wolfe told the group. Gesturing toward a glass display case showing carefully arranged toys, he said, “These belonged to Nana,” one of the Fearing children.

Henry Fearing’s father, Paul Fearing, Wolfe said, was one of the first lawyers in the Marietta area, and Henry was born in a house –and he pointed out the window — where Harmar school now stands. The Fearing House dates back to the mid-1800s.

“Any of you know who Calvin Coolidge was?” Wolfe asked the students, and a few acknowledged they knew he had been a president.

“Well, Charles Gates Dawes was born in Marietta, and he was Coolidge’s vice president,” Wolfe said.

As the students lined up and placed ornaments they had made, ranging from reindeer to stars, on the tree, Caltrider said the December trek to Fearing is something special for the fifth-graders.

Ella Hess said she made a reindeer ornament for the tree.

“Some people told me it looks angry, but that’s not how I meant for it to look,” she said.

She said she’s been to Fearing House before but she enjoyed this visit because Hutchinson gave her class a tour of the second floor.

“It was cool because I’d never been up there before,” she said.

Brodic Stewart made a cutout Christmas tree as his ornament.

“I wanted to make something Christmas-y, but not obnoxious,” he said.

He said the Fearing House interests him, especially the Civil War exhibits.

“I like that it’s all original, vintage,” he said. “I’m fascinated by history, and how they’ve kept things in this condition.”

The house is currently decorated with multiple trees and other holiday fare, most authentic to the Victorian period. It will hold an open house this weekend, from 1 to 5 p.m. on both Saturday and Sunday.