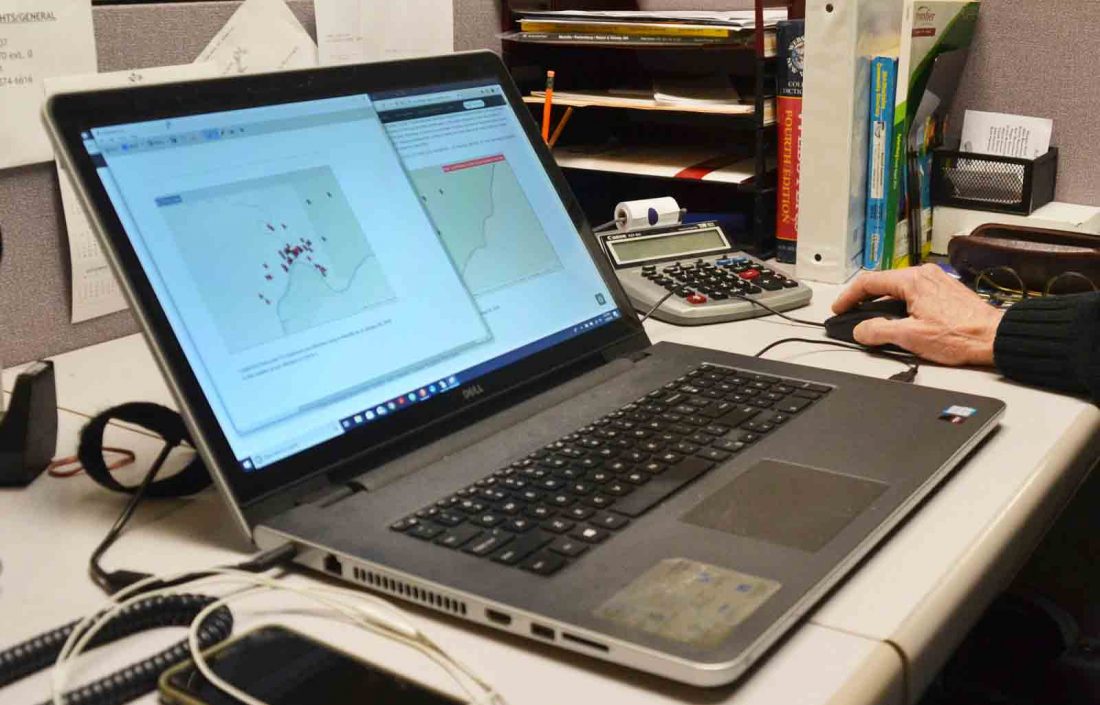 A map shows the location of sex offenders’ residences in Washington County. A new registry for violent offenders is expected to become available for Ohio law enforcement agencies within the next few months. (Photo illustration by Janelle Patterson)

Law enforcement and courts this year will have another reference to add to a growing number of registries that allow them to identify specific groups of offenders.

Sierah’s Law, passed by the Ohio Legislature and signed by Gov. John Kasich in December, will impose a requirement for a specific group of violent offenders to register in a state database accessible by law enforcement officials and courts.

The requirement applies to people upon release from prison who have committed aggravated or attempted aggravated murder, murder, voluntary manslaughter, kidnapping or second-degree felony abduction. The offenders will be required to maintain their registry for 10 years after release and report any changes of address.

The same requirements apply to anyone meeting those criteria who has been convicted in another state and moves to Ohio.

The database joins an array of other such registries, which include sex offenders, arsonists and people with histories of violence who have been adjudicated by courts to be mentally unstable.

Neither the Marietta City Police nor the Washington County Sheriff’s Office have been notified about the new database, and it might be several months before it becomes operational.

Washington County Sheriff Larry Mincks said such databases have proven useful. His office has two deputies who keep track of sex offenders on that national database.

“We check compliance all the time. They have to tell us if they move, and we have a couple people who go out and make checks on them twice a month,” he said. “It’s been a great resource for us.”

The Sierah’s Law database, he said, might have limited application in Washington County. If it operates in the same manner as the sex offender registry, local input and maintenance of local entries, such as address changes, will be done through the sheriff’s office.

“We don’t have anyone here that I know of who fits that description, although we’ve got people in prison serving time for those offenses, so it might be applicable whenever they get released,” Mincks said.

Mincks said the registry might be useful for the same reason the sex offender registry is.

“If, for example, you’re investigating an unsolved sex crime, you would look at that list because of the known recidivism rate,” he said.

Marietta Police Chief Rodney Hupp said the system’s usefulness will depend on how it is tied into the existing system for law enforcement inquiries. A query using a driver’s license number, for example, would yield traffic offenses and some other records, but to get everything on a particular person, the department would need to run a Complete Criminal Background, which is more complex and time-consuming. If the database is tied into the simple driver’s license query or Social Security number, he said, it would be much more useful.

Hupp said one advantage the sex offender registry has is that it is federal, which is particularly important for border communities like Marietta because it covers neighboring West Virginia as well. Sierah’s Law covers only Ohio, so in that sense it might have limited usefulness.

In Washington County, a recent database query showed just over 50 sex offenders. Nedeff said there is only one name in the arson registry for the county, and Hupp said the Hopper Registry has three or four names.

The Hopper Registry was created in late 2013 and named for Dep. Suzanne Hopper of the Clark County Sheriff’s Office, who was killed in 2011 when she responded to a disturbance at a campground. A man from Morgan County, Michael Ferryman, with a history of mental instability and violence, killed Hopper with a shotgun. The deputy had no way of knowing she would be dealing with someone who had a history of unpredictable violence.

Under the Hopper Act, anyone who has dealt with an Ohio court and adjudicated as not guilty by reason of insanity, mentally incompetent to stand trial, or ordered by a judge into mental health treatment, is required to be registered in an FBI database.

The Hopper registry is a national database, and courts are responsible for notifying local law enforcement when anyone in their jurisdiction is found not guilty by reason of insanity or similar findings. Local law enforcement agencies then enter the record into the database. The arsonist database, established in 2013, is maintained by the Ohio Bureau of Criminal Investigation.

Sierah’s Law is named for Sierah Joughin, who was kidnapped and murdered in Sylvania in 2016. She was on summer vacation and preparing to return for her junior year to the University of Toledo. The man who killed her was a repeat violent offender.

Robin Bozian of Southeastern Ohio Legal Services said because the database is restricted to law enforcement and court officials, and not open to the public, there are no concerns about violation of privacy rights. The information in the registry, other than Social Security and driver’s license numbers, is public record and can be obtained on request.

The Ohio Attorney General’s Office said Wednesday that creation of the registry will be undertaken once the new Attorney General, Dave Yost, has taken office. Yost is scheduled to move in next week.

•Hopper’s Law: Database of people determined by the court to be both violent and who have been adjudicated to be mentally unstable.

•Sierah’s Law: Requirement for people who have committed certain violent offenses to register upon their discharge from prison.