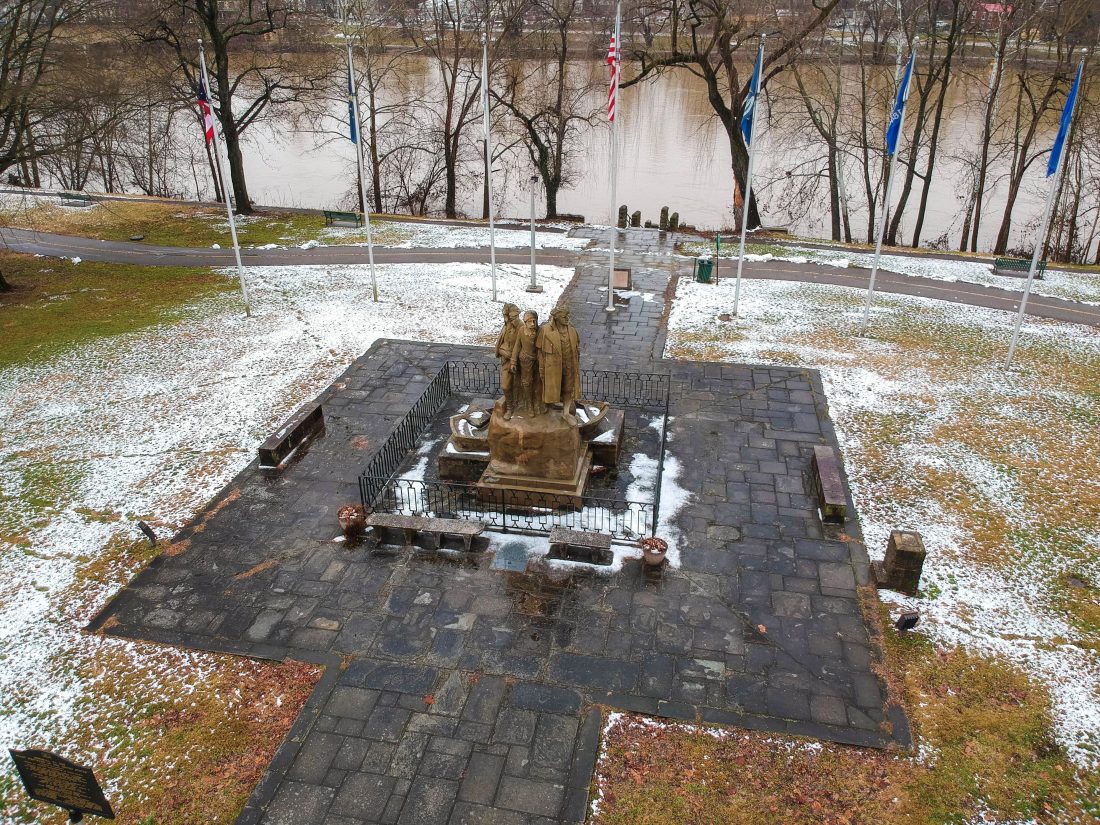 JANELLE PATTERSON The Marietta Times The Start Westward Monument in East Muskingum Park in Marietta is central to significant grant investments in the 2018 granting cycle for the city.

Long-term planning led to a landmark year in grants for the city of Marietta’s development department.

“In 2018 we had a 100 percent success rate for the grants we applied for, with zero city matching funds,” explained Development Director Andy Coleman.

From federal Community Development Block Grant funding increasing by 11.2 percent from the 2017 funding year, to state funding sources tapped, Coleman said the applications were successful because of the strength of coordinated private donors and demonstrated success with previous years’ funding.

And those successes even allowed for the award of a federally-recognized designation for tax incentive-based investment.

“Every year we apply for U.S. Housing and Urban Development CDBG funds and we were fortunate enough to be designated a preferred city in 2017,” explained Coleman, noting the most recent award of $404,000 to be spent this year as 2018’s award. “Nationally the increase was 0.9 percent for 2018, and I only expect that to maybe raise another half percent this year. But as we keep demonstrating how we’re working within the HUD goals and guidelines, I’m confident we’re on track for an almost 20 percent increase over three years of the program.”

CDBG funds are used for programs like Paint Marietta and emergency repair for low to moderate income households, the Community Action Bus Line, handicap-accessible sidewalk and ramp replacements and Marietta Main Street–plus in the past as matching funds for trail extensions and the current downtown economic planning efforts which have a community survey out under Enrich Marietta.

In state funds, the city was awarded a Transportation Alternatives Program grant of $1.1 million from the Ohio Department of Transportation in 2018 matched with another $500,000 in the governor’s capital appropriation to go toward the first phase of restoration and development of East Muskingum Park and the Start Westward Monument.

“Right now the first funds available are going to architectural and engineering services, and we’ll begin seeing the more finalized plans for wayfinding, restrooms in the park, adding historic street lighting and a possible trail widening through the park,” explained Coleman. “Phase one of that project is approximately $1.8 million of the total $6.5 million.”

Tony Durm, transportation engineer with ODOT and a member of the Start Westward committee, explained that the first phase is a proving ground for future grant applications.

“The whole thing is a vision to create a cooridor from the downtown to the museum district,” he said. “Historic lighting, sidewalk repairs and curb replacements and additional parking plus a restroom facility in the park can show that.”

He mentioned that not only will historic lighting appear in East Muskingum Park as phase one develops, but it will also connect Third Street to the Washington Street Bridge and surround the museum district between St. Clair Street, Second Street, Knox Street and Front Street, then continue along Front Street to Sacra Via Park.

Coleman also mentioned the $38,350 investment by the Ohio Department of Natural Resources in Gold Star Park.

“That will go with a 25 percent local match through the McDonald’s half marathon proceeds and the Washington County Health Department’s healthy communities grant to the first phase of the trail at the park,” he said of the $49,900 project to solidify the park’s lower half of a trail loop this spring. “Matching those local dollars and the in-kind labor of the city to put in some culverts we should see that take a couple weeks to complete this spring and then apply again for the Ohio Nature Works grant to complete the upper half.”

And under tax incentives, Coleman and Mayor Joe Matthews applied through the Ohio Developmental Services Agency last spring to have Census Tract 205 designated an “opportunity zone” by the state.

“While there’s not grant money specifically tied to the designation it works similar to a Community Redevelopment Area or to Tax Increment Financing,” he explained of the capital gains tax delay and/or dismissal. “It allows for the reinvestment of that potential tax into their business as a longer-term incentive.”

Coleman said the census tract selected for the long-term tax credit program was based on the most substantial data determining low-to-moderate income status and other federally recognized eligible markers.

“If a business were to take advantage of that their contract would have to be ratified through city , and the city development office would administer the contract just like we do with CRA and TIF and (the business or investor) would work with the city auditor and tax department to see those returns invested back into the business or zone,” he said.

“By offering capital gains tax discounts or elimination you’re hoping to attract long-term investment since that discount is based on how long (an investor) is there,” explained Allphin, noting investment can be made in the area’s housing stock, job creation and educational opportunities to be considered for the opportunity zone credit.

Another grant applied for in 2018 with results expected in April is for the Northwest Territory Playground, next to Washington Elementary.

“Marcia Stewart and I wrote that application together,” said Coleman, noting the Ohio Department of Natural Resources grant under the Land and Water Conservation fund could be as high as $500,000 with a 50 percent required local match. “If awarded that match will be coming from their fundraising efforts which are coming along. We know it’s a competitive grant, but I think they’ll be impressed with the work Marcia and that committee has done.”

Next on his list into the coming three years is an assessment of the city’s Americans with Disabilities Act compliance.

“We’re working with the engineering department on finding funding for and setting the parameters of an evaluation of where we are,” said Coleman. “Once we’re able to produce that we can in 2021/2022 put together a transition plan and start going after individual project funding to bring the city in compliance with handicap-accessibility.”

• Since 2012 the Marietta Community Development Department has written and administered more than 40 grants totaling more than $9.1 million.

• $2.35 million has come from the Ohio Department of Transportation.

• $850,000 has come from the Appalachian Regional Commission.

• More than $200,000 has come from the Ohio Department of Natural Resources.

• In the 2018 granting year, 100 percent of grants applied for were successful totaling more than $2.1 million with zero city matching funds, instead utilizing other grants, in-kind labor and private donations.