Long Rifle Exhibit follows in steps of the pioneers 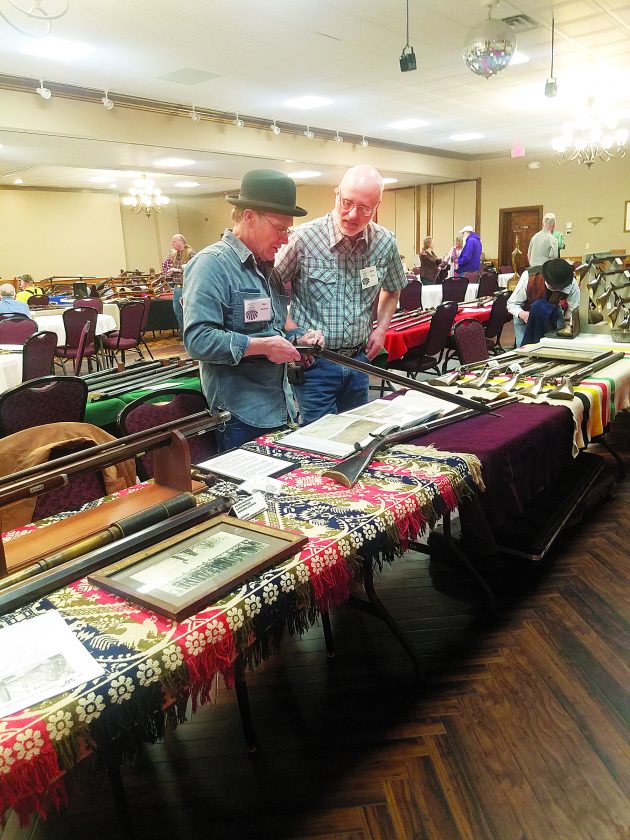 There is around 400 Ohio-made muzzle-loading rifles exhibited by private collectors, including plain working rifles as well as fancy brass, silver and ivory inlayed rifles. The event continues today at the Lafayette.

The rifles all hold a historic value to Ohio.

“The purpose of the exhibit is to provide education to the public about muzzle-loading rifles, their purpose, historical value and the gunsmiths who made them,” said Bill Reynolds, a member of the AOLRC and a historian with the Campus Martius Museum in Marietta.

Members who are at the event may be able to help identify long rifles brought in by visitors, he said.

“George Washington Kimes was my great-great grandfather, he made muzzle-loading rifles in the area, but never signed his work,” Keith Metcalf said.

“I keep hoping one day someone will bring one in that has been passed down in their family, with either a receipt or something showing that it is his work,” he said.

Metcalf said in the 1800s Ohio was second only to Pennsylvania in the number of gunsmiths.

Among guns brought by Metcalf was a revolutionary British gun, found close to a previous Indian reservation.

Other than rifles, there were many powder horns or powder flasks, bullet molds and hunting pouches.

Metcalf was nowhere near the only member who could trace his roots to historical gun makers.

Harlan Howell is able to trace his lineage all the way back to John Howell, a Quaker who came over with William Penn. John Howell had a muzzle-loading rifle business in Martin’s Ferry he ran with his sons and they continued to run for following generations.

Howell brought in muzzle-loading rifles made in the 1800s by C.W. Howell, a descendant of John Howell. He also brought a map from 1888 of Martin’s Ferry that shows where the gun shops operated by the Howell family once stood.

“The land around one of the shops is now underwater after the Ohio River was dammed up, causing it to rise,” he pointed out while explaining the map.

Barnhill said he isn’t as interested in guns, as he is in the history surrounding them.

“Everybody’s life was affected by the gun,” he said.

“It was a tool used to obtain food, fight wars and used for protection. Each one is unique, a way for great artists and crafters to use their skill for something so widely used,” Barnhill said.

At the exhibit, every booth had extensive knowledge on the firearms and their history in Ohio. A trading table was also provided where members can offer antique arms and accessories for sale or trade.