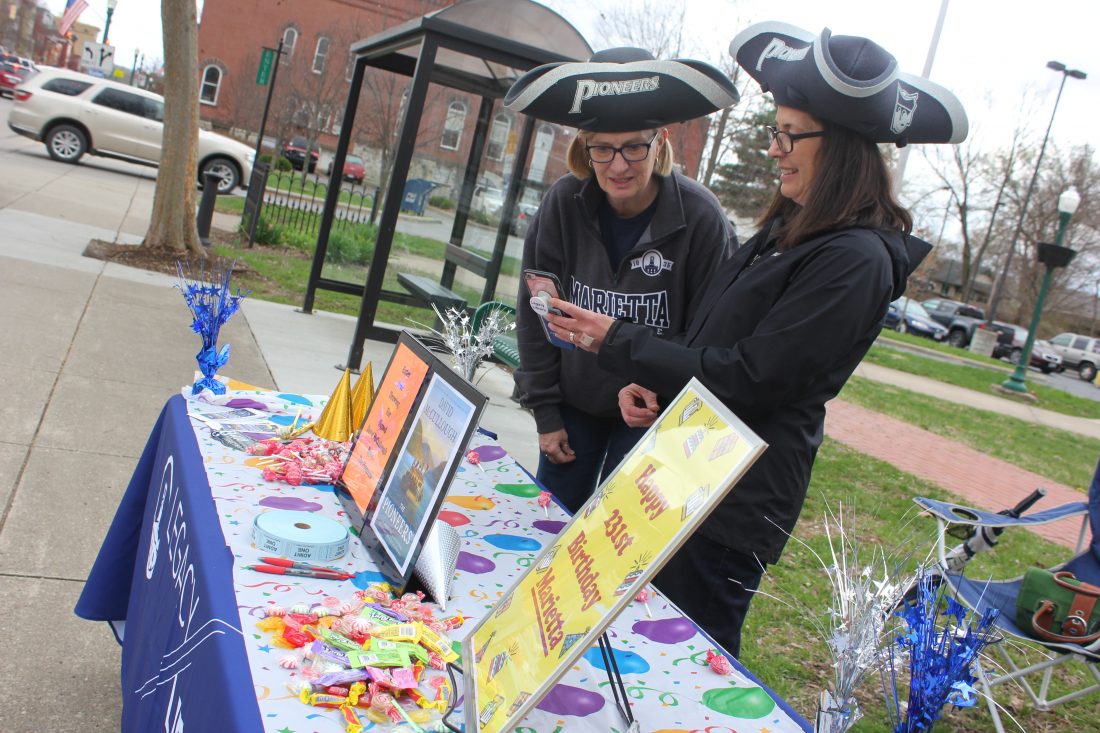 JANELLE PATTERSON The Marietta Times Barb Binegar, left, and Jeanne Catalano, sport pioneer hats at a birthday table in front of the Armory in Marietta Friday representing Marietta College's upcoming exhibit "Ohio Pioneers: From such beginnings, much may be expected."

JANELLE PATTERSON The Marietta Times Barb Binegar, left, and Jeanne Catalano, sport pioneer hats at a birthday table in front of the Armory in Marietta Friday representing Marietta College’s upcoming exhibit “Ohio Pioneers: From such beginnings, much may be expected.”

Marietta celebrations for the city’s 231st birthday kicked off early Friday with cake at the Armory, shops open late downtown and music to start the weekend’s First Settlement Festival.

“Our city birthdate is a reason for celebration,” said Mayor Joe Matthews as he prepared to cut the birthday cake. “And a lot of people don’t know that the statue in (East Muskingum) Park of the first pioneers was sculpted by the same man who did Mt. Rushmore.”

Bell-ringing at the Fearing House Museum has for many years been open to the public and students from Harmar Elementary School as a signal of the annual birthday celebration, but due to weather, that invitation was postponed to Tuesday.

“But Tuesday is actually Rufus Putnam’s birthday, he turned 50 years old two days after the settlers landed here,” said Mary Jo Hutchinson, manager of the museum. “So it’s a significant day too, it’s another birthday. We can ring the bell for Marietta and for Rufus.”

Those first pioneers landed on the shores of Marietta on April 7, 1788, to a very different landscape than what’s seen around town today. 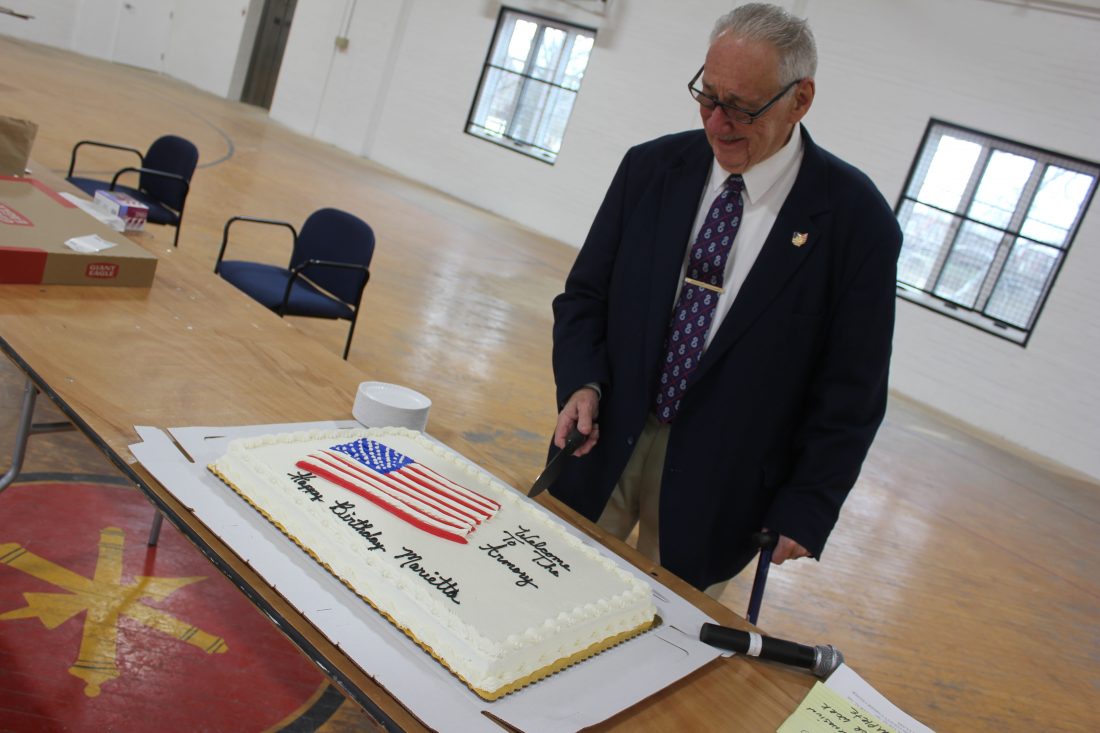 “Marietta is very focused on its history as the beginning of settlement in the Northwest Territory,” said Archeologist Wes Clarke. “Those first founders who arrived here from New England had a keen interest in history, too. And when they got here and saw the woodlands and the earthworks they had maps drawn up and set aside certain areas for preservation.”

That preservation has carried on for the last 231 years, said Clarke, though the landscape has changed.

“There’s been a pretty big alteration of the land from heavily forested and lightly populated to now, it’s a really radical transformation of the land,” he said. “Most of the hills were timbered out and have been impacted since our first settlement. And the oil and gas industry certainly had impacts across the land as did the clearing for agriculture.”

But what was found by the first settlers was documented in the papers of the Ohio Company, Rufus Putnam, Ephriam Cutler and the Hildreth Collection currently preserved in the Marietta College Special Collections archives at the Legacy Library.

“And those papers and many of the original first materials will be on display as we get ready for the launch of David McCullough’s book ‘The Pioneers: The Heroic Story of the Settlers Who Brought the American Ideal West,'” said librarian Linda Showalter. “We have an exhibit opening on April 15 that was inspired by working with Mr. McCullough and many of the materials he used in research from our collections we’ll have on display.”

The exhibit’s name is pulled from a letter from George Washington to Marquis de Lafayette about the settlement stating “from such beginnings, much may be expected.”

“Both of them were fellow colleagues of Rufus Putnam, and had high hopes for his success here in the Northwest Territory,” explained Showalter. “So what we’re doing is sharing some of the inspirations for the McCullough book in an exhibit that will be on all four floors of the library here and also have 12 panels traveling to different schools and museums and organizations throughout Ohio.”

Marietta College History Professor Brandon Downing will give a lecture called “The ‘Tedious March’: Journey to the Ohio Country” at the opening of the exhibit, in McDonough Auditorium on the college’s campus, beginning at 7 p.m.

And both those beginnings and present progress were celebrated a few days early Friday with a few slices of cake at the Armory with Matthews.

“This armory is a part of the city’s history too, it was built in 1914,” he said. “Now it will be used again, it’s nice to see this come alive in this way and we’ve had several unions and students contribute to the living history here.”

Then Sunday the Washington County Historical Society will officially celebrate Marietta’s first settlers at a dinner at the Lafayette Hotel, followed by bell-ringing Tuesday and the exhibit opening the following week.

• First Settlement Festival: Saturday, noon to midnight, music in downtown Marietta with the main stage at the Adelphia Music Hall.