JANELLE PATTERSON The Marietta Times From left to right, Logan Reynolds, Tessa Peters, Alyx Conkright and Morgan White laugh at a joke before rehearsal with Marietta College Director of Bands Marshall Kimball, center, who retires this year after 47 years of music education in Ohio. 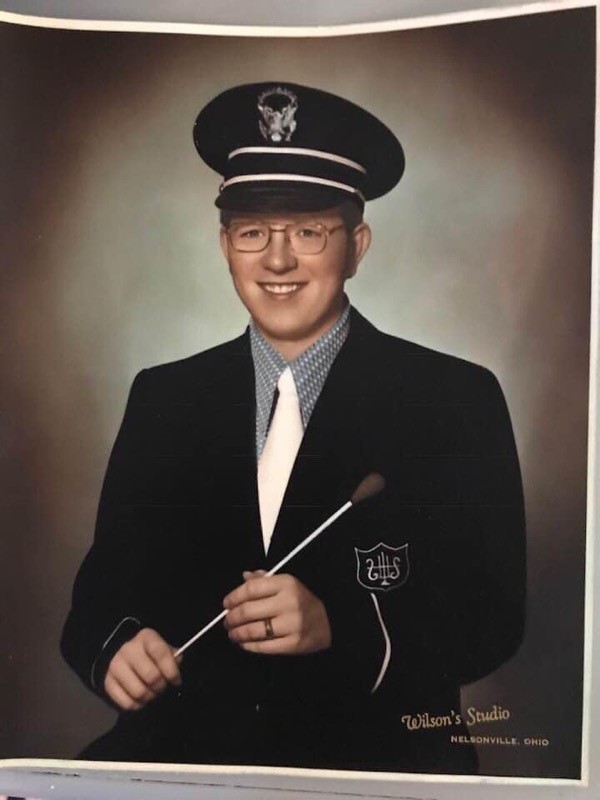 Music surrounds, infiltrates and emanates from everything.

That’s the lesson retiring band director Marshall Kimball, 69, of Marietta, hopes the generations of students he has taught over almost 50 years remember.

“My oldest students are 65, they’re grandparents, have kids who have been through college, but they’ll still be my kids,” he smiled as he recalled the years of teaching music Monday.

The performance will include significant pieces representing different times in the near half-century career of Kimball from tributes to his time with the college and Marietta City Schools to the very first marching band performance. 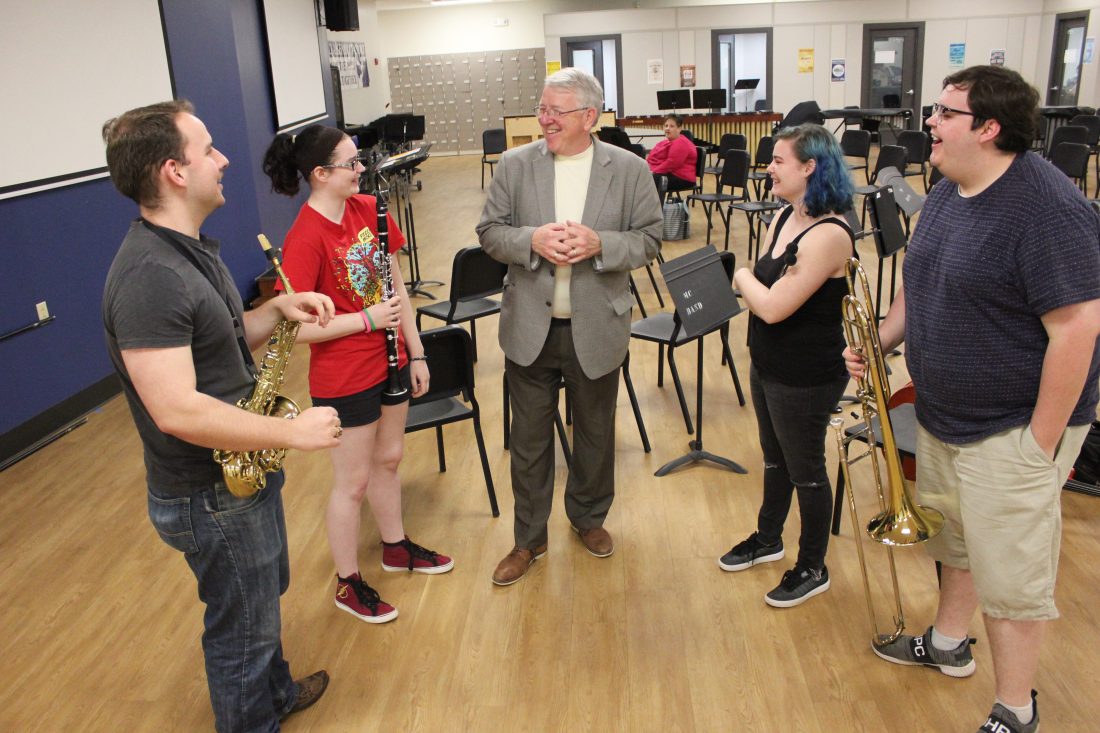 JANELLE PATTERSON The Marietta Times From left to right, Logan Reynolds, Tessa Peters, Alyx Conkright and Morgan White laugh at a joke before rehearsal with Marietta College Director of Bands Marshall Kimball, center, who retires this year after 47 years of music education in Ohio.

“The Festive Overture composed by Dmitri Shostakovich was the very first band composition I ever conducted,” he explained. “It’s only appropriate now, after a piece commissioned specifically about a hard time in my life (To Persevere is Everything by Dr. Andrew Francis) that we then conclude with where it all began.”

Where it began was not far from where Kimball plans to retire, as he studied music education at Ohio University and now hopes to spend more time with grandchildren when not tending to his flowers and home on Harmar Hill.

His first days with a baton in hand were in 1971 at Starr Washington in Hocking County when all 12 grades were in one building. That later influenced his time in Athens County at Trimble Local Schools until he moved on to Marietta City Schools from 1975 to 2001.

His words at band camp one summer were the beginning of Marietta High School’s marching band being known as the Wall of Sound. They came just before he retired for the first time in 2001.

“The name started as a teaching technique,” Kimball recalled. “We were at band camp in West Virginia, and we come together to this company front, and I told them I want it to be this big wall of sound without one brick missing–and that’s how it was born.”

That moment, that shoulder-to-shoulder wall of sound, still makes one former student emotional when she remembers it.

“My freshman year we got to the finals at nationals with that, and the glissando during the wall,” said Desni Crock, 46, of Marietta. “Oh, I’m getting chills just talking about it.”

Over the decades, thousands of students have walked through the band hall doors, welcomed by the high expectations of their band director.

“I was honored to be in the percussion section of the Marietta High School marching band when Marshall Kimball led us to be a really successful band (1979-81). When we took the field the audience was always pleased with our show,” recalled Dennis Blauser, of Reno. “We wanted to do good for him because of the effort he put into us.”

“He was the only teacher ever to give me detention,” added Crock. “I forgot my music folder once, and he followed through… I look back at that and am just so proud of what I learned from him.”

Kimball said he hopes those life lessons accompany the pride instilled in accomplishing hard work, noting that he’s kept a recording of every single performance of his bands, from VHS tapes and cassettes to now the digital records.

“There were only 300 kids at first, so I literally taught everything (from) kindergarten general music all the way up with choral and vocal,” he described. “It has been a career, not a job –that makes a big difference– and I still enjoy the kids, but the 12-to-14-hour days when I was 20, 30, 40, that’s a little different than when you’re almost 70.”

Though Kimball initially retired in 2001 from Marietta City Schools, it obviously didn’t stick.

“I was terrible at retirement,” laughed Kimball. “One day (his wife) Marcia comes home and finds me picking up leaves by hand, one-by-one.”

So back to the classroom he went, serving as an adjunct that year for both Marietta College and Washington State Community College until 2006 when he returned full-time to teaching at Marietta College.

“Now I’ve had several kids I taught who met in band get married, I’m marrying two this fall, others still get together for trips and girls’ nights much to my detriment,” Kimball joked, referring to Crock and her group of friends who became close in band.

“We get together every chance we get… we’re probably more close since and because of his first retirement,” explained Crock. “Several of our group are even coming for Mom Prom Friday and staying overnight through the weekend for his final performance.”

It’s a performance Kimball said he hopes to use to recognize his students –both current and past –and to reconnect with their lives afterward at the reception.

“I’m planning to ask everyone in the audience who was a former student of mine, a parent of my student or a grandparent of my student to stand,” he said. “I want music to continue. Some will be performers, some teachers but they’re all consumers of music. I hope that they’ll remember the importance music has played in their lives–not an afterthought at all.”

Kimball will be one of nearly 40 staff and faculty recognized at the annual employee service award and retirement recognition ceremony at 11 a.m. May 8.

The public is invited to attend the ceremony at The Gathering Place at the corner of Seventh and Butler streets.

• Marshall Kimball, 69, of Marietta, will retire this week after 47 years of music education in Ohio.

• Kimball has been married to Marcia for 47 years.

• The pair have two sons, Christopher, 44, and Jeremy, 41, and four grandchildren: Kalyn, Casey, Solomon and Bridgett.

• Who: Free and open to the public. Former students of Marshall Kimball, their parents and grandparents will be asked to stand during the performance.

• The annual Marietta College Employee Service Award and Retirement Recognition Ceremony will take place at 11 a.m. May 8 at The Gathering Place, corner of Butler and Seventh streets.

• Those being recognized for their service to the college have a combined 630 years there.

• Kimball and Peggy Arnold, associate director of student financial services, are the two retirees to be recongized alongside 37 staff and faculty.

• The public is invited to attend and congratulate the service of those recognized.