Top students honor the adults, educators who influenced them 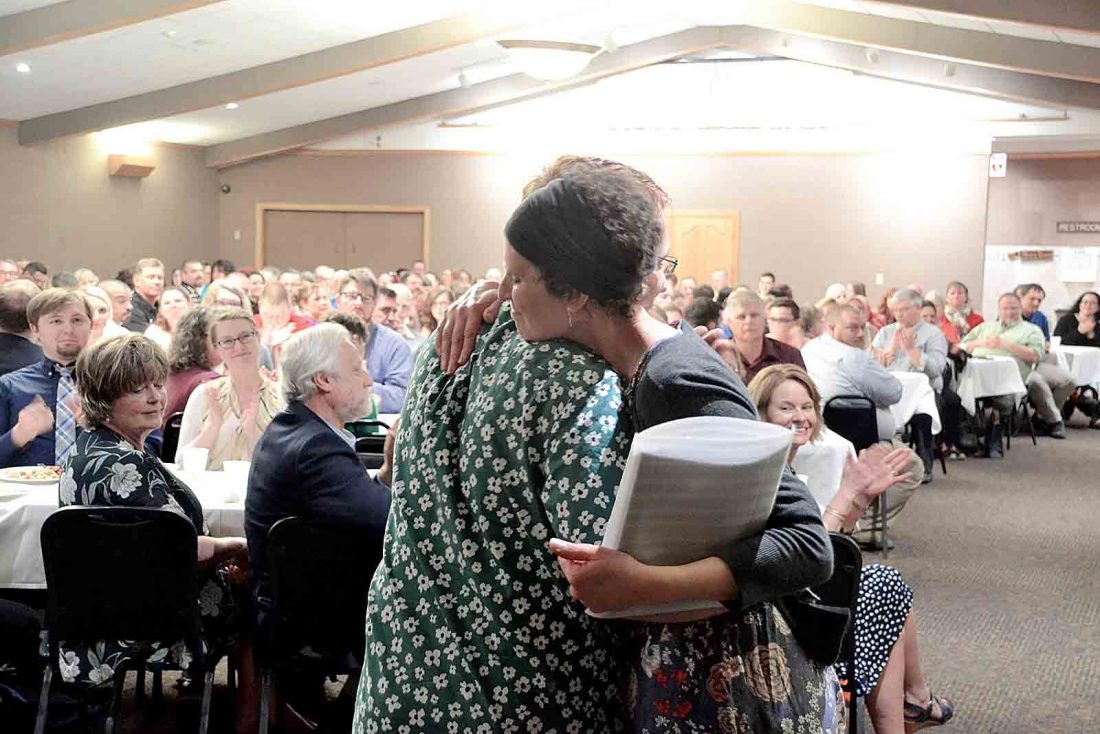 Alicia McIntire hugs graduating Marietta High School senior Spencer Haught at the 32nd annual academic awards banquet Thursday night in the Marietta Shrine Club. Haught said he chose to honor McIntire, who was his first-grade teacher, recalling that McIntire “genuinely cared about how your day was going and managed to lift your spirits if you were feeling down.” (Photo by Michael Kelly)

It was a night to honor not just success but also those who helped the successful achieve their honors.

Thursday evening, for the 32nd year, Marietta City Schools gave its honors graduates – seniors who have achieved a grade point average of 3.5 or more – the opportunity to recognize the adults in their lives who helped them get there.

“We celebrate the hard work of these very bright young people and our finest educators,” Superintendent Will Hampton said to open the evening at the Marietta Shrine Club, attended by more than 200 students, family members, teachers and school officials. “I’m humbled to be a witness to this.”

Senior Bailey Young sat with her parents, Lori and Eric Young, waiting for her table to be called to the dinner serving line. She decided to honor her math teacher. Paige Fleming, who taught Young statistics, said she was a bright student in both the freshman and senior classes.

“She was very good at math, very talented,” Fleming said. 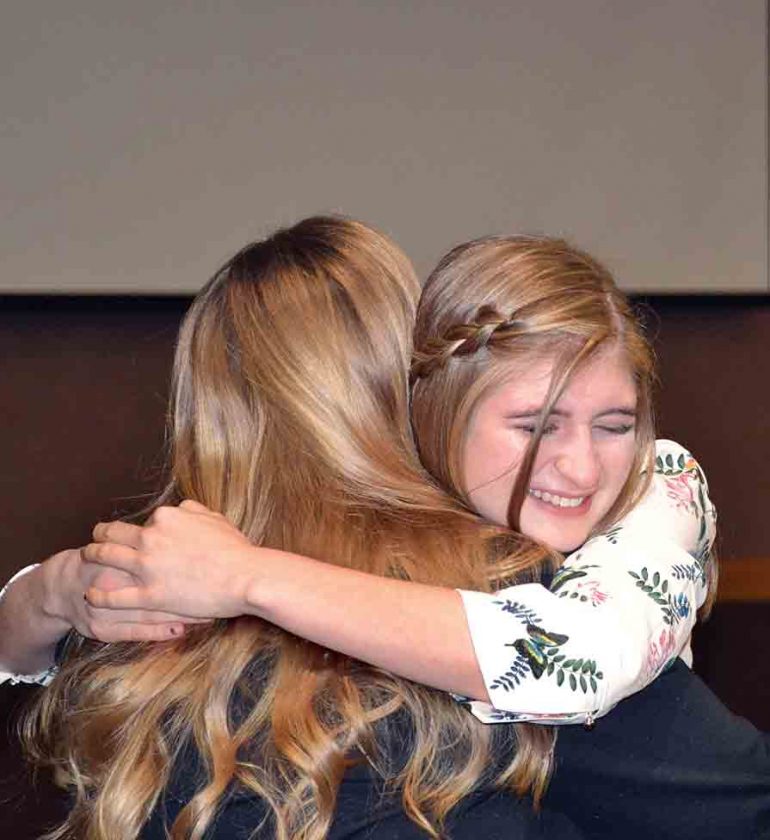 “She encouraged me to be excellent at it,” Young said. She is lined up to attend Tiffin College, majoring in criminal psychology.

Spencer Haught delved into the distant past to choose his honored teacher, Alicia McIntire. Sitting with McIntire and his parents, David and Kelly Haught, he said McIntire was his first grade teacher at Putnam Elementary School and left an unforgettable impression of caring and positive calm.

“She genuinely cared about how your day was going and managed to lift your spirits if you were feeling down,” he said later in remarks to the room. “She taught me that a simple smile can really make someone’s day.”

McIntire said Haught was a memorable student, in part because he wished her a good day at the end of school every day. 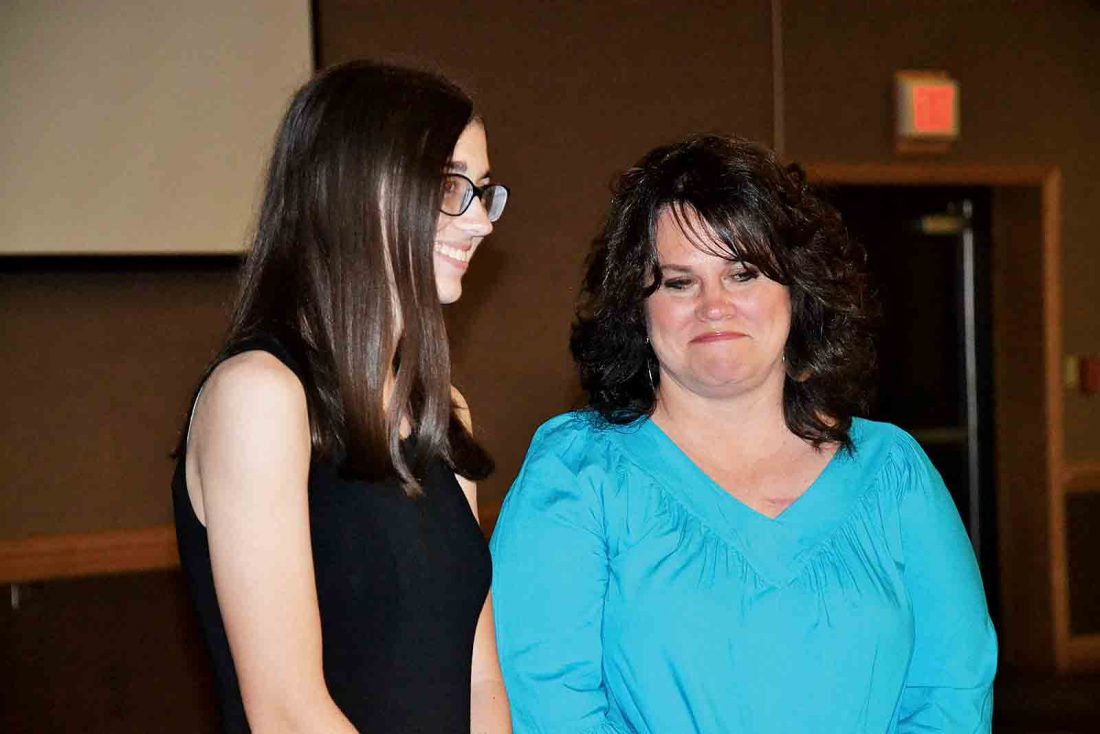 Marietta High School graduating senior Kennedy Schuck stands with Amy Mendenhall, her soccer coach, during the 32nd annual academic awards banquet Thursday night at the Marietta Shrine Club. In honoring Mendenhall, Schuck said, “She has always been there for me when I needed her.” (Photo by Michael Kelly)

Azelyn Kerenick elected to honor science teacher Shyla Schoelkopf “not just because she brings me peanut butter cups every day, but because she really cares about her students, beyond just testing, she makes me a better person every day.”

Schoelkopf said Kerenick was a rewarding student to teach.

“She’s an excellent student with a lot of natural curiosity,” she said.

Kerenick will be attending Rhodes College in Memphis, Tenn., to study political science.

Her mother, Jolie Kerenick, said her daughter has done well in the Marietta school system. 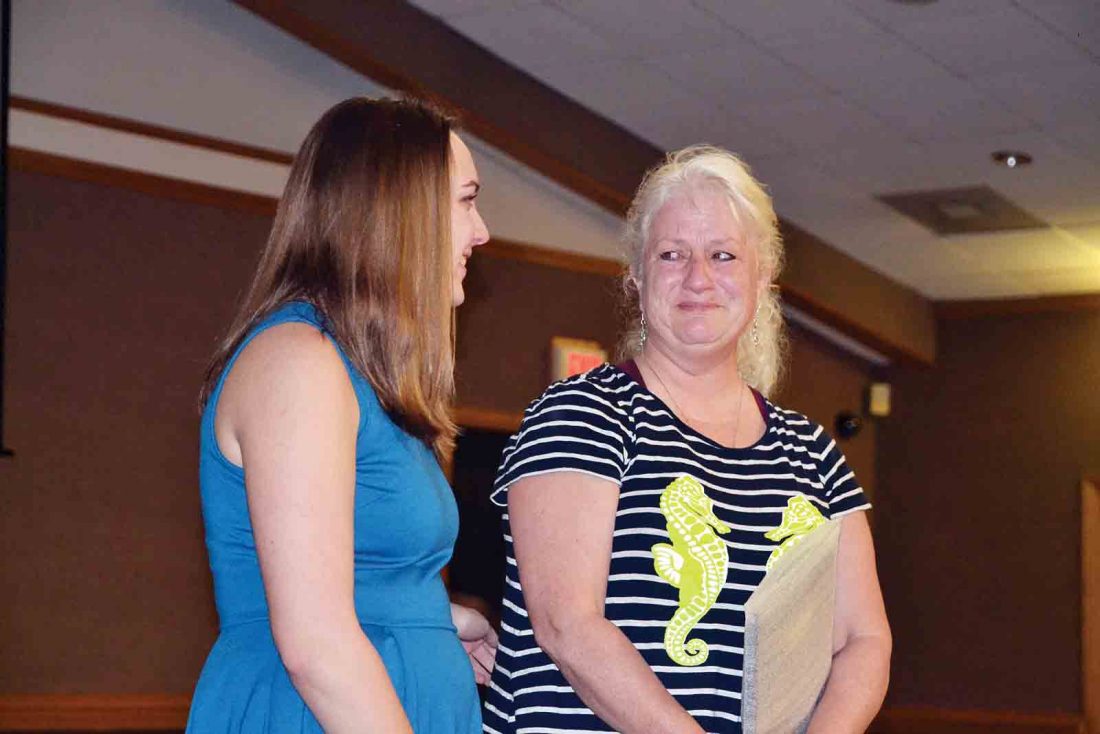 “We’re very grateful to be blessed with great teachers who care about their students,” she said.

Most of the 43 students chose to honor a particularly influential teacher, but several honored athletic coaches and a few honored their parents. The tributes ranged from comical to heartfelt praise.

“Friends, extracurriculars and passions have come and gone, but the love of music you have taught me has been a constant,” Grace Arnold said of her piano teacher, Merewyn Weinkauf.

“His classroom was always an interactive environment, and it doesn’t matter if the ‘thinking music’ for the day is live recordings of Coldplay, ‘You Dropped a Bomb on Me’ by the Gap Band … when you walked into that classroom you knew every day there would be a new skill to learn and an old one to practice,” Margaret Gottfried said in recollection of classes overseen by her engineering teacher, Steve Foutty.

Ben Lawson offered up a tortured, overwritten paragraph full of thesaurus-sourced words as a tribute to his English teacher, Amy Warren. 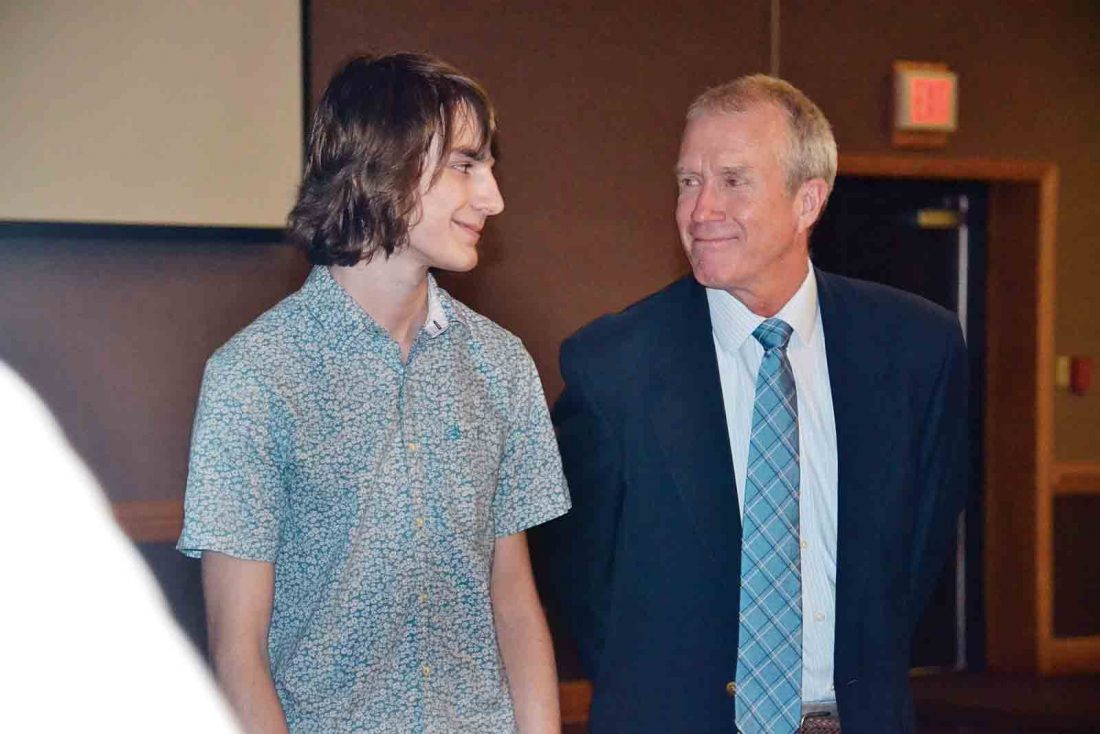 Marietta High School graduating senior Spencer Tenney exchanges a look with Russ Garrison, vice president of the Marietta Local Schools Board of Education and Tenney’s former cross-country track coach. In honoring Garrison at the banquet, Tenney said under Garrison’s leadership the running team became like a family for him in seventh grade. (Photo by Michael Kelly)

Marietta High School Principal Chad Rinard wound up the evening by reciting lengthy and incomplete lists of the colleges and areas of study for which the students were bound. He read a poem by Ralph Waldo Emerson on the meaning of success, and asked the students to stand.

“Look around,” he said. “What you see is success all around you.” 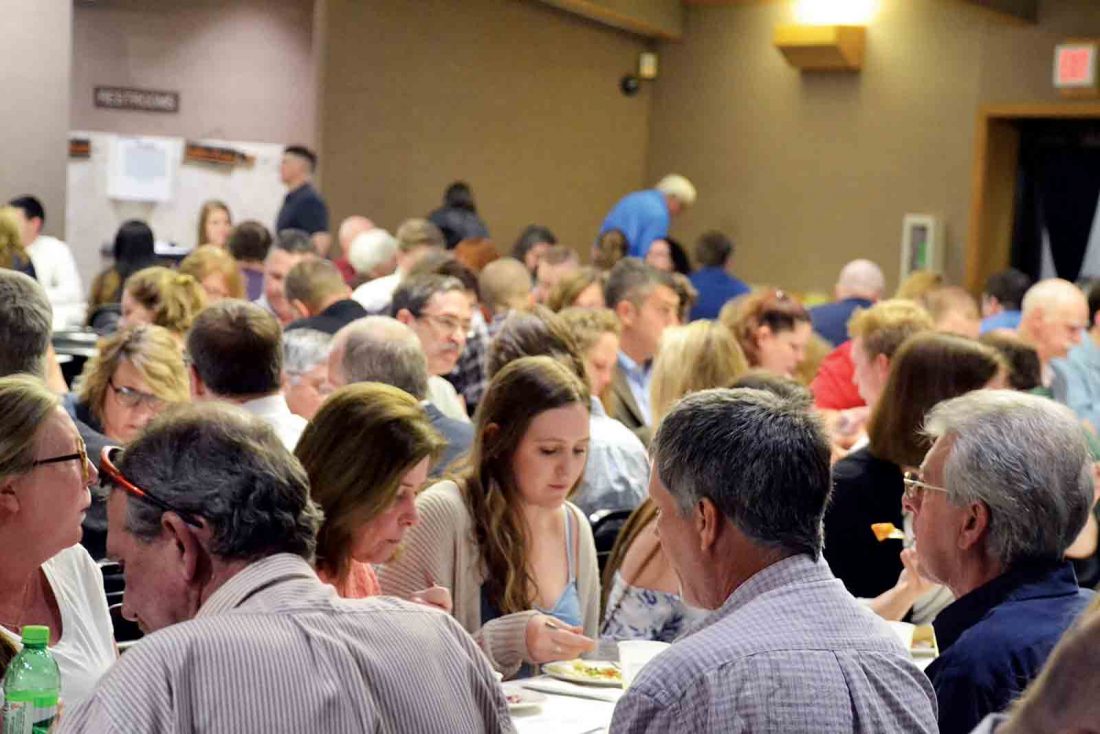 More than 200 students, parents and educators attended the Marietta City Schools 32nd annual awards banquet at the Marietta Shrine Club Thursday night. The evening honored 43 graduating seniors who achieved a grade point average of 3.5, who in turn gave honor to their most influential teacher or other adult in their life. (Photo by Michael Kelly)