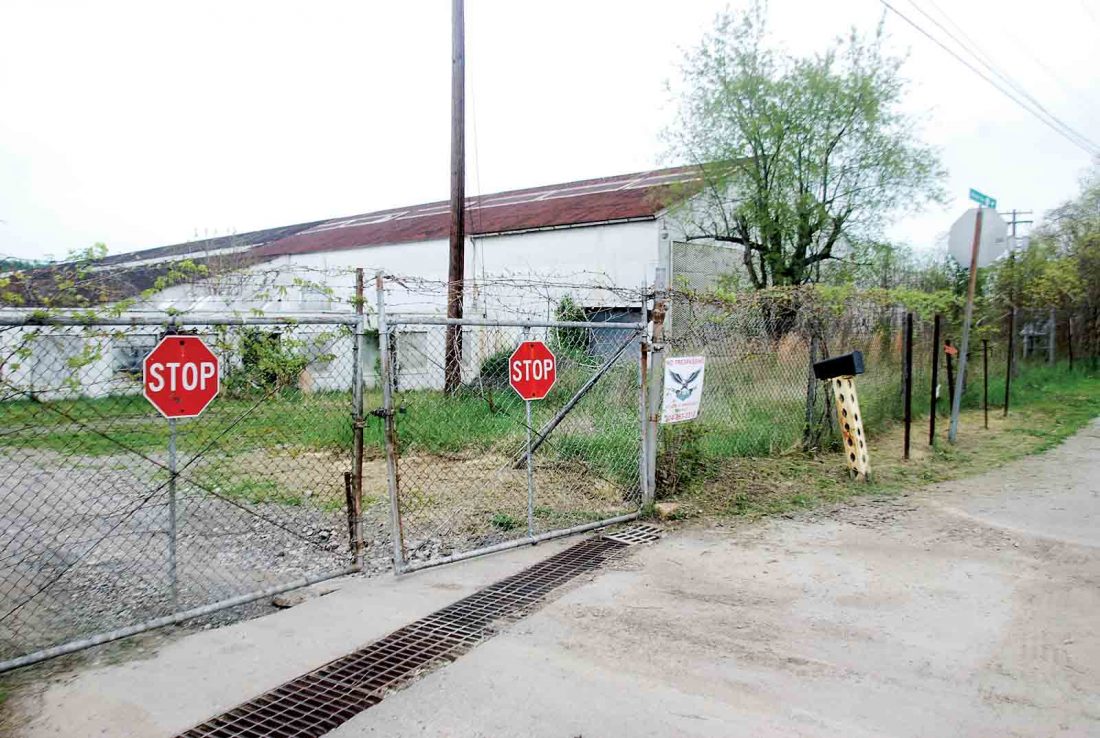 The Evergreen Holdings facility on 60th Street in Vienna, owned by the Naik group of companies, is the subject of an order issued this week requiring the owners to fully comply with the requirements of a recent state fire marshal inspection within 30 days or cease using the building for commercial purposes. Similar orders were issued for a Naik facility in Ravenswood and a Parkersburg warehouse where a Naik business leases space. (Photo by Evan Bevins)

PARKERSBURG — The West Virginia State Fire Marshal this week labeled two buildings owned by the Naik group of companies and one where they lease space as fire hazards and ordered owners to comply with requirements from recent inspections or cease operations.

The orders for Naik facilities Evergreen Holdings, 100 60th St., Vienna, and Fives LLC, 2969 Greenhills Road, Ravenswood, were hand-delivered to company representatives Tuesday, according to Lawrence Messina, director of communications for the West Virginia Department of Military Affairs and Public Safety. An order for the former AB Chance warehouse, where a Naik companies owner Saurabh Naik leases space along with six other businesses, was also delivered to that facility’s owner, Dick Warner.

The Camden Avenue warehouse is located a block from the former Ames shovel plant, which was operating as the Naiks’ Intercontinental Export and Import Plastics warehouse when it burned to the ground in October 2017. The fire, whose cause remains undetermined, prompted state and local officials to take a closer look at the recycling and storage facilities owned by the company in the region, along with other similar operations.

The order for each property states that the building in question “is being used in such a way as to endanger life and property from the hazards of fire.” They also say no corrective action has been taken, “including but not limited to the receipt of the 15-day corrective action plan.” According to inspection reports provided by Messina, the Evergreen property and Warner’s warehouse were inspected by fire marshals on April 4, while the Ravenswood site was inspected April 8.

The orders say the building owners must take action to “fully comply” with the requirements noted in the inspection reports within 30 days or “cease and desist using said building for commercial occupancy.”

Naik properties representative Sunny Naik said Wednesday afternoon that he had received the orders but could not comment on them at that time.

Warner said he has spent more than $1 million on the Camden Avenue warehouse since purchasing it in 2003 and continues to pay property taxes, the county fire fee and for insurance on the building. He said he’s turned the order over to an attorney, but is “willing to do everything I can do as fast as I can do it” to comply.

“I’m going to do everything I can possibly do to please everybody,” Warner said. “We have worked hard to get it the way they want it.”

Warner said since the inspection earlier this month, he has replaced six old fire extinguishers with 10 new ones and had 17 others recertified. That would address one of the 33 violations noted in the most recent report, up from 26 in a December 2017 inspection.

Repeat violations marked in the April 8 inspection include a requirement that sprinkler systems be tested, corrected and repaired by a qualified, licensed contractor; sprinkler heads that have been painted; and stacks of material that have fallen over and blocked aisles.

This month’s inspections were the fourth each for the Naik properties in Vienna and Ravenswood.

The Evergreen Holdings site includes several buildings near the Vienna Utility Board office, not far from Greenmont Elementary School. Multiple buildings have broken windows and vegetation climbing their walls.

The most recent inspection by fire marshals lists 26 violations, compared to 10 on reports from November 2017 and May and October 2018. The report notes “no change since last inspection” and suggests “more fire code violations may be found once the building is cleaned up.”

Consistent across all four reports are violations regarding the lack of an active fire alarm in the building, the need to restore the sprinkler system to the proper operating status and multiple exits being blocked. The most recent report cites stacks of product leaning or fallen over, trash in the building that needs cleaned up and the main water valve in the fire pump building having frozen and “busted” due to a lack of heat.

The Fives LLC inspection notes that it was formerly referred to as Naik-Silverton. Reports for three previous inspections of a facility by that name list a different Greenhills Road address than the latest one, but Messina said it appears the address changed as part of the statewide 911 mapping process.

Violations ranged from eight to 12 on the first three reports. The April report included 16 violations, adding blocked aisles, the need for annual fire extinguisher inspections and the lack of a sprinkler system inspection since 2015 to repeated items like having no active fire alarm in the building, the requirement to conduct a fire watch as a result and the need for a complete electrical inspection.

Some improvement was shown over time as well, with multiple blocked exits mentioned only in the first report.

On Monday, two of 20 citations issued on Naik properties in the City of Parkersburg were dismissed by Municipal Court Judge Debra Steed after Fire Chief Jason Matthews said those items had been addressed. No fines have been assessed on the citations issued by the city as the company continues to work to remedy the issues.