Work to start soon on west side project 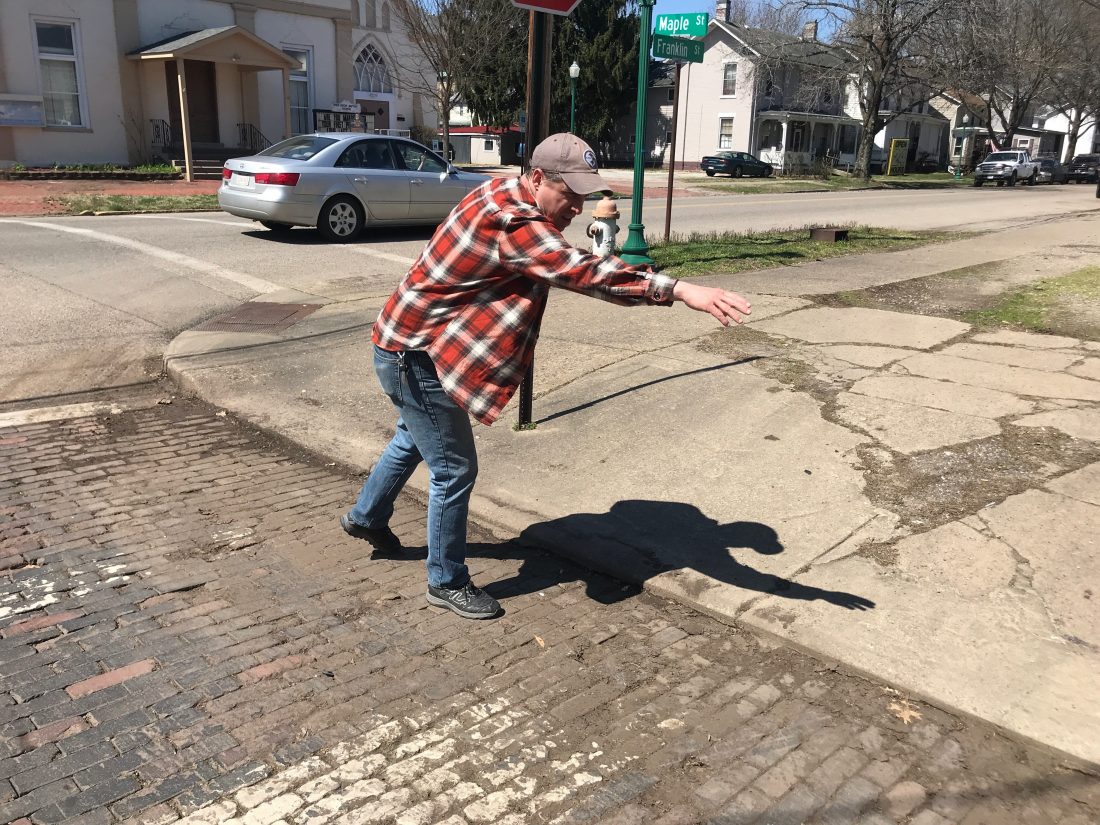 JANELLE PATTERSON The Marietta Times Geoff Schenkel describes how water and ice can make crossing the brick portion of Maple Street at Franklin Street in Harmar hazardous as he visits the site of an upcoming CDBG project Wednesday.

JANELLE PATTERSON The Marietta Times Councilman Geoff Schenkel, right, and Development Director Andy Coleman, retrace the steps of work for an upcoming CDBG improvement to the eastern sidewalk at Franklin and Maple streets in Harmar Wednesday.

JANELLE PATTERSON The Marietta Times Geoff Schenkel describes how water and ice can make crossing the brick portion of Maple Street at Franklin Street in Harmar hazardous as he visits the site of an upcoming CDBG project Wednesday.

Calling it the poster child of the Community Development Block Grant, a hazard to pedestrians is to be fixed by early May.

The brick crosswalk stretching across two lanes on Maple Street on the east side of Franklin Street is loving referred to by residents in the neighborhood as “Lake Franklin.”

“It’s a hazard in every season when it rains, water stands in puddles, and in winter that freezes,” said Councilman Geoff Schenkel as he pointed out sediment patterns and uneven areas that are also trip hazards at the crossing and a challenge to maneuver on foot or in a wheelchair.

“But it’s really become a perfect example of the goals of CDBG,” explained Development Director Andy Coleman. “The most-requested project we’ve ever had, completely citizen-driven, which satisfies (U.S.) Department of Housing and Urban Development requirements. It uses up leftover sidewalk program funds from 2017 and still leaves money for another sidewalk project with 2018 money.”

Schenkel recalled the strong representation made by William Pryor, who lives at the southeastern corner of the intersection, who explained at a neighborhood meeting last year how he would sweep loose asphalt that had gathered from standing water to unblock the catch basin in front of his property. 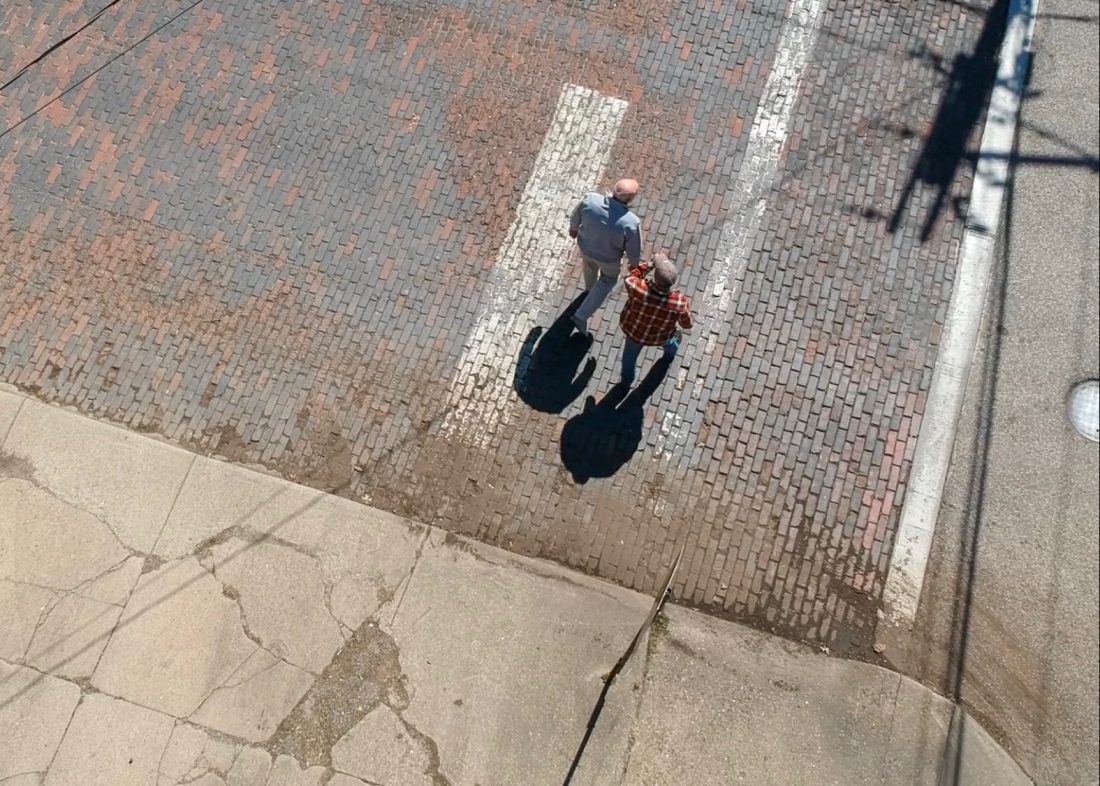 JANELLE PATTERSON The Marietta Times Councilman Geoff Schenkel, right, and Development Director Andy Coleman, retrace the steps of work for an upcoming CDBG improvement to the eastern sidewalk at Franklin and Maple streets in Harmar Wednesday.

“He made the strongest impression on me,” said Schenkel. “As did the navigation by those in wheelchairs.”

“That water puddles and I can see it from my house,” she said. “It’s mostly an issue for walking, after a heavy rain there’s no place for the water to drain so it sits there. And who wants to step off the sidewalk into 2 or 3 inches of water?”

Coleman explained that the $16,365 project will be paid for with $8,511 in remaining Access Marietta program funds from 2017’s fiscal year and the remaining portion of the project cost will be shared by $7,854 of 2018’s funds.

“Which then leaves the rest of the $20,000 allocation for another sidewalk and curb ramps project still available this year,” he said.

“Now we hope it crosses Franklin and extends to our sidewalk concerns here around the church,” said Chidester. “The organizing and the community meetings here on the west side are a good start, and if they’re doing work over there to make it more walkable they can come over here, too.”

Smith and Chidester explained that the congregation at the independent Baptist church has many elderly parishoners.

“And trying to navigate around the roots bringing up the brick sidewalk and the gumballs are dangerous,” said Smith. “We want to fix the sidewalk and would do the labor but we need the tree commission to bless removing that tree before it also damages our roof.”

Schenkel said Thursday he would talk with Smith and Chidester to understand their concerns and help them navigate the city processes like he has for the Maple Street “Lake Franklin” work for other residents in the current project.

The $16,365 Lake Franklin funding will go to Smith Stylecrete to install two new curb ramps on the eastern corners, replacing approximately 30-year-old concrete ramps with Americans with Disabilities Act-compliant ramps that will have truncated domes embedded within the slopes for the blind.

The two corners sit across Franklin from the church, in front of Pryor’s house on the 200 block of Maple on the southern side and in front of a former gas station on the northern side.

“And we’ll retain access to the driveway at the old gas station,” pointed out Coleman as he and Schenkel visited the site Wednesday.

The contract also includes the installation of two new catch basins, as new collection points for the standing water issue.

“What’s great is Eric Smith (of Smith Stylecrete) was down here several times in all kinds of weather,” said Schenkel. “I’ve joked that I’ve probably been down here 12 times, but that estimate isn’t far off at this point.”

The contract is a design-build meaning Smith Stylecrete will design how the two catch basins will connect via pipes to the existing catch basins at the corners, then raise the brick of the sidewalk to be level and complaint with newly-poured concrete curb ramps.

“The catch basins will be installed next to the sidewalk ramps, approximately in line with the light pole and the stop sign on each side,” said Coleman.

The project was given the notice to proceed on April 1 and will be complete weather-permitting by May 3.

• Two catch basins, two corners of ADA-accessible curb ramps and a raised brick crosswalk are to be built across Maple Street at Franklin Street in Harmar.

• The project is contracted with Smith Stylecrete for $16,365.

• The project is to be paid for with federal Community Development Block Grant funds.