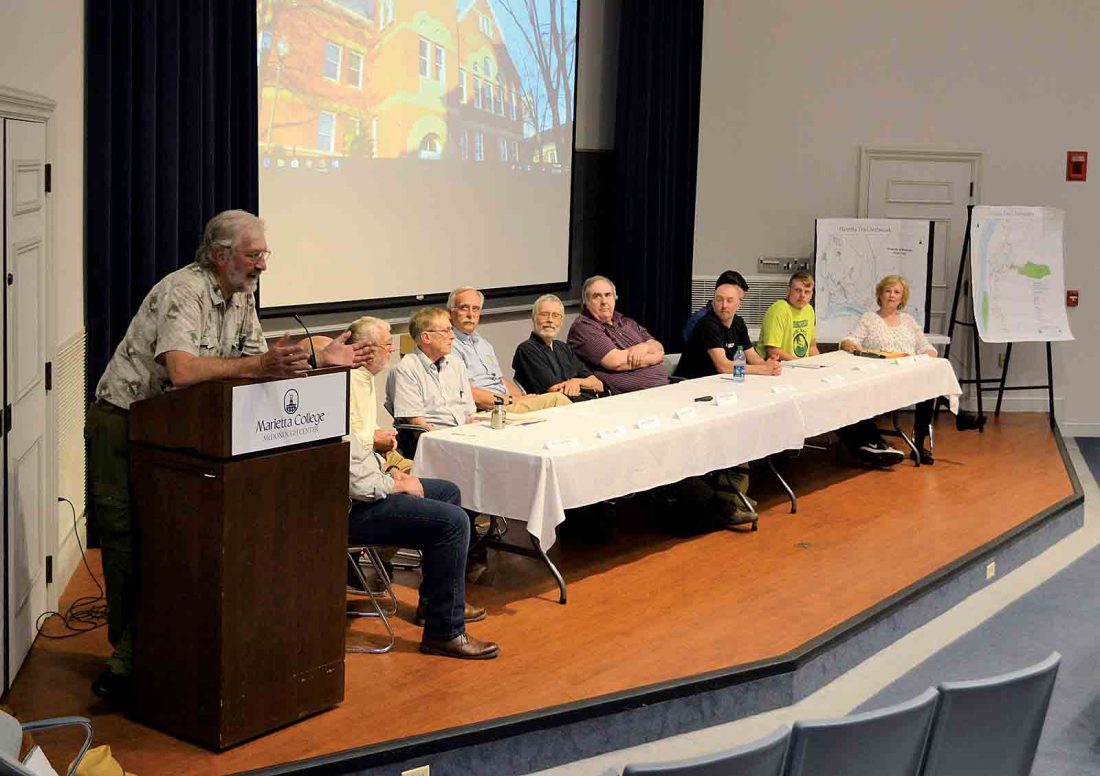 Roger Kalter introduces representatives of 11 organizations interested in increasing the amount of biking trails in the area Tuesday evening at Marietta College. (Photo by Chad Plauche-Adkins)

Over 30 bicycling enthusiasts gathered on Tuesday evening at the Alma McDonough Auditorium on the campus of Marietta College to hear several organizations in the area talk about how their bike path projects are going, and what their future plans to increase biking and multi-use trails in the valley are.

Event organizer, Roger Kalter, told the interested residents that it was up to them to help get more biking options in the area.

“For things to happen…it’s going to take the whole community, not just a few of us,” he said.

Eric Lambert, project engineer for the city of Marietta told attendees that phase five of the Marietta River Trail would be complete by the fall.

He said the trail starts at the fairgrounds, then winds along the Muskingum and Ohio river until it ends on Jefferson Street near the I-77 overpass. Lambert said the path would continue along the river until it reaches Duck Creek. It will go up the creek and cross it using a 135 foot long walking bridge and continue behind businesses until it reached Cogswell Lane. He concluded by saying the completed project would make the trail almost five miles long.

Paul Lewis of the Devola Muti-Use Trail gave a brief history of the project and the hopes for the future of it. He said the project started four years ago and was completed just at the beginning of 2018 with the help of $320,000 in donations from 82 individuals and organizations. He gave the original reasoning behind the project as well.

“It would incentivize the community to connect the (Marietta River Trail) to the Devola Multi-Use Trail,” he said.

Kenyon Cox, member of the Belpre Area Multi-Use Trail Committee gave input on the progress of connecting Belpre’s Trail to Athens County’s trail system. He said Belpre’s current trail system uses less traveled city streets, but is trying to secure abandoned rail lines west of the city to use to connect with Athens County. The total cost to purchase the more than one mile stretch of abandoned rails will be $238,000, he said. The final stretch of land needed to connect with the neighboring county is owned by a private individual, and discussions about the purchase of the needed land is still happening.

Ryan Smith, president of the River Valley Mountain Biking Association, let attendees know that even though the area is trying to increase its amount of bike accessible paths, local enthusiasts still have one of the best playgrounds around.

He said his organization maintains over 150 miles of the best mountain biking trails in the state right here in the Mid-Ohio Valley, and has worked hard to get a trail within a quarter mile of every home in Marietta.

“We have accomplished that if you include the Marietta River Trail,” he said.

He said his organization’s next project will be to connect mountain biking trails in the Broughton Nature and Wildlife Area to trails in the Wayne National Forest.