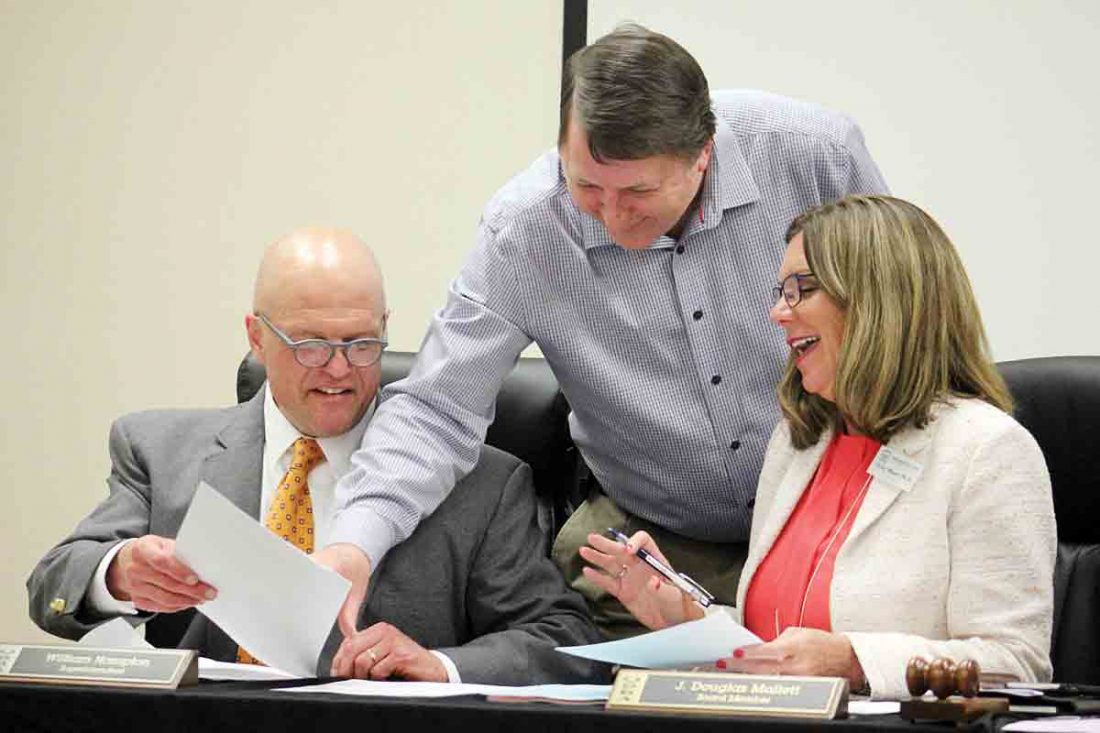 The acreage sits behind the current community college campus, between Glendale Road Extension, the college and Interstate 77.

And Board Vice President Russ Garrison explained Monday what the projected scope of the new campus would entail.

“We’re looking at just under an $85 million investment,” he explained. “With about $75 million co-funded from the state, that leaves us with just under $10 million in locally funded initiatives.”

Local share would then be 61 percent of the master plan estimate, $45,866,545 plus the $9.8 million in locally funded initiatives.

But those locally-funded initiatives aren’t just the extra bells and whistles, he explained.

“The state is assuming we’re starting with a ready, buildable site,” added Garrison. “That’s not including any additional earthwork, site preparation, utility costs, building roads, or any upgraded materials to make our investment last longer in the new, single building.”

The project envisioned includes building a single building to house Pre-K through grade 12, but segmented for security and student support.

“But the state does not cover auditoriums or athletics; they’ll cover a cafetorium’s stage but not seating or the other amenities we know promote a strong arts education,” Garrison explained. “So part of the discussions we’re having is looking into how much would it cost to refurbish what we have in the existing auditorium, gyms and other athletic facilities or do we build new?”

Board President Doug Mallett explained Monday that the number of facilities the school system owns includes more than just the academic buildings, noting the athletic facilities on Glendale Road, in Devola, between Phillips Elementary and Marietta College’s fields on Pike Street, the American Legion fields, tennis courts and the bus garage.

“And we’re still going to retain some of those extracurricular facilities if we move to this single building, single campus; there’s not enough space there for everything,” he noted. “But these preliminary numbers are a good indication of what we’re expecting.”

Garrison said he expects to have final numbers for the board’s approval by the June board of education meeting.

“That way we have the time to get our resolutions in order and go to the auditor and to the state,” he added.

Mark Weihl, a school parent and avid attendee of the board meetings, commended the board on the working plan for the single campus, then asked what the plans are for the schools and facilities which would be vacated if the levy passes and the single building is built.

“Will they be razed?” he asked, wondering if specific language could be added to the levy issue to prohibit private and charter schools from purchasing the buildings and establishing competition.

“And all take students away from our school district; is there a way to protect against that?” he continued.

Mallett said the board and the committee spearheading the levy are aware of that concern, and Garrison noted that current state legislation favors the private/charter school usurpation.

“Currently in state law, we have to give first preference to qualified (private) schools and charters,” Garrison explained. “The state won’t give us the money to demolish until we’ve exhausted that option to sell.”

Mallett said those concerns with enrollment are being discussed, and the demolition or sale of buildings/land has yet to be determined.

However, in the financial report Fiscal Officer Frank Antill did point out how open enrollment in other surrounding school districts and online offerings is hurting the school district.

“More are going out than coming in now,” he explained.

He noted in the five-year forecast, which is due to the state board of education at the close of May, that without any changes to staffing or funding from the state, the carry-forward balance is depleting.

“We’re looking at a $303,000 loss this fiscal year from the money we’re spending to the money we’re bringing in,” said Antill. “But I’m still waiting on the budget from the state, and we’re completing a staffing analysis right now so we’ll update this in July and again have a good look at it in October.”

Hampton also noted that the hiring process has begun for a talented and gifted specialist to be in place by the fall for the elementary schools. He said the new position will primarily work with fourth- and fifth-grade students but may also draw upon talented third-graders as well.

Antill also noted that the district is planning to take retirees from the district on a Valley Gem boat trip in late July.

The board’s next regular meeting is scheduled for 6:30 p.m. June 17 at the district office, 111 Academy Drive.

• The Marietta City Schools building project centers on a plan to build a single building to house PreK-12th grade with segmentation for security and student support.

• The plan is to build the new facility on land acquired from Washington State Community College.

• State co-funding based on official enrollment projection would support $75,191,057 of the project.

• Additional utility costs to deliver electricity and sewer to the site.

• Upgraded materials for the durability of investment.

• Refurbishment of existing auditorium/gym, and/or new construction not included in state share.

• Local share to be included in a resolution to the Washington County Auditor will cover the remaining $55,666,545.

• Millage for the November ballot initiative has not yet been determined.