Theatre honors a milestone with ceremony 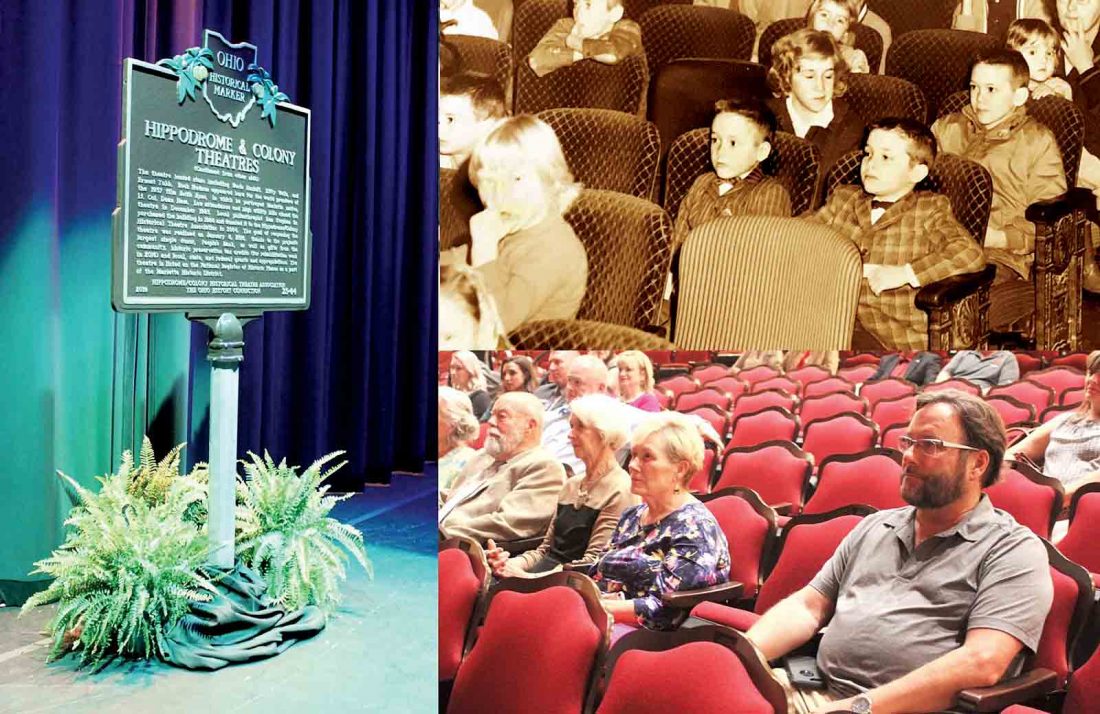 Top: Dan Harrison, 6, and David Harrison, 8, sit in seats of the Colony Theatre 57 years ago during a B.F. Goodrich Christmas party. (Photo courtesy of Dan Harrison). Bottom: Dan Harrison, right, sits among patrons and volunteers at Peoples Bank Theatre in Marietta Thursday during a celebration of the building’s 100th anniversary. (Photo by Janelle Patterson/ The Marietta Times) Left: The historical marker recognizing Peoples Bank Theatre’s past as the Hippodrome and then Colony theaters for the last hundred years waits behind the curtain on stage Thursday for an unveiling in Marietta. (Photo by Janelle Patterson/ The Marietta Times)

But Thursday also marked another significant number in Marietta worthy of celebration–100 years at 222 Putnam St.

On May 9, 1919, the Hippodrome opened its doors for the first time to the public with the silent film, “Daddy Long Legs.”

“The ad the C&M Amusement Company took out in The Marietta Times that week told of the fine and commodious auditorium,” said Executive Director Hunt Brawley Thursday at the anniversary celebration on stage.

Then 30 years after it first opened as the Hippodrome, the name changed under new ownership to the Colony Theatre with a reopening on June 25, 1949.

Then a third name change brought about the Peoples Bank Theatre when it reopened Jan. 8, 2016 after 30 years dark with what was called a new era of professional performance in Marietta.

From its early vaudeville acts to its mid-century days as a movie theater, to today many performances have come across the stage, and that history is one Brad Smith, technical and lighting director for the theater, said was uniquely personal to commemorate Thursday.

“This place has been a part of my life since I was a little kid, now my kids participate in shows here, I work with the acts that come in here and my company had the privilege to handcraft the historical marker we unveiled today,” said Smith, who also owns Sewah Studios in Marietta. “You know waiting behind the curtain with that today, just like working behind the scenes with the acts we bring in it just hit me how important it is to recognize where we came from and what this offers to the community.”

Smith said the post and metal marker will be erected on Third Street outside the back of the theater.

“It will be on Third between the light pole and the crosswalk, but both the pole and marker are designed to be removable, so when we load in big acts it can sit inside the Stage Door on display,” he explained.

For Dan Harrison, 63, of Marietta, connection to the theater goes back to his childhood and a photo he discovered recently.

“It shook me up for a few days when I found it, there were goosebumps all over my body,” he said.

It’s a black and white photo from a B.F. Goodrich Christmas party held in the theater when it was called the Colony.

“Back then my mom worked for B.F. Goodrich, and all the plants in the area would have their big parties at the theater,” said Harrison. “If you look at the photo though, those same two seats my brother David and I are sitting in, those are the same ones I (sponsored) and I had no idea this photo even existed until eight years after I paid for them.”

Theater officials said revenue in the first year was more than $1 million and following years saw numerous acts cross the stage with visits from worldwide acts including Japanese Taiko drummers in February this year, to small local performances and even the planned visit of two-time Pulitzer Prize winner David McCullough coming at the end of May.

“The biggest thing for me here is the variety,” said Smith. “In the industry, this is called a roadhouse, we don’t produce shows, we host orchestras, theatrical performances, country acts and we’d even be able to show a movie tonight no problem. And in this area we are very rich in technical talent to support all of that–it’s brilliant.”