Ed Robinson, director of programs for Carrollton Exempt Village Schools, gestures as he guides a delegation from Marietta City Schools around the Carrollton district’s new combined middle and high school. The Marietta group traveled two hours to the rural district Monday to get a first-hand look at a building that incorporates many of the elements being considered for the district’s proposed building project. (Photo by Michael Kelly)

A workman marks a panel in the commons area of the new Carrollton Exempted Village Schools combined middle and high school building. (Photo by Michael Kelly) 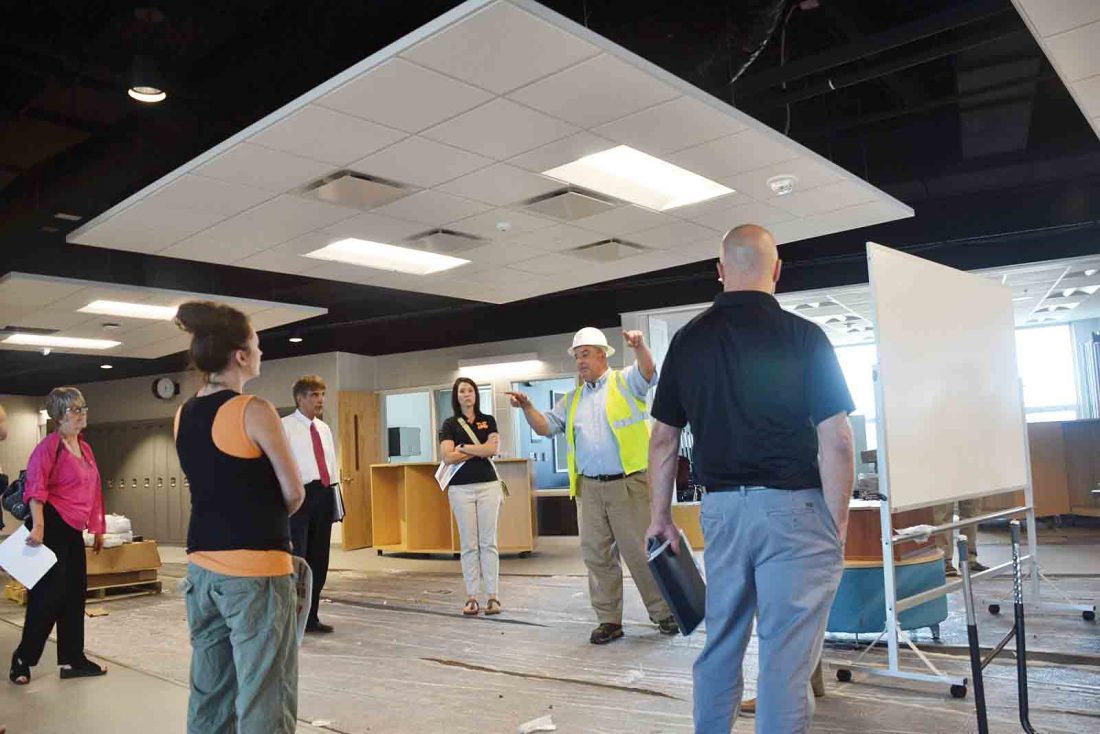 Ed Robinson, director of programs for Carrollton Exempt Village Schools, gestures as he guides a delegation from Marietta City Schools around the Carrollton district’s new combined middle and high school. The Marietta group traveled two hours to the rural district Monday to get a first-hand look at a building that incorporates many of the elements being considered for the district’s proposed building project. (Photo by Michael Kelly)

CARROLLTON — On paper, the Carrollton school district looks a lot like Marietta.

The district enrollment is about 2,000 students and has experienced years of steady decline. It’s building inventory was old, with three elementary schools, a middle school and high school, the most recent of which was built in the 1950s and is called by locals “the new school.”

But Carrollton has taken a step that Marietta is now just dreaming about. The district’s new combined middle and high school campus, at 166,000 square feet, will be ready to open for students in August.

A delegation from Marietta – including two board members, three district administrators, three principals, an assistant principal and a union representative – traveled two hours Monday to tour the new building, seeing the realization of many of the concepts it is considering for the Marietta project.

Carrollton superintendent Dave Quattrochi told the group that the building was created with the idea that a consolidated elementary school ultimately will be attached to the building, creating a single campus for all Carrollton schools. The campus will be divided into three schools, sharing central facilities such as kitchen, HVAC and other utilities. 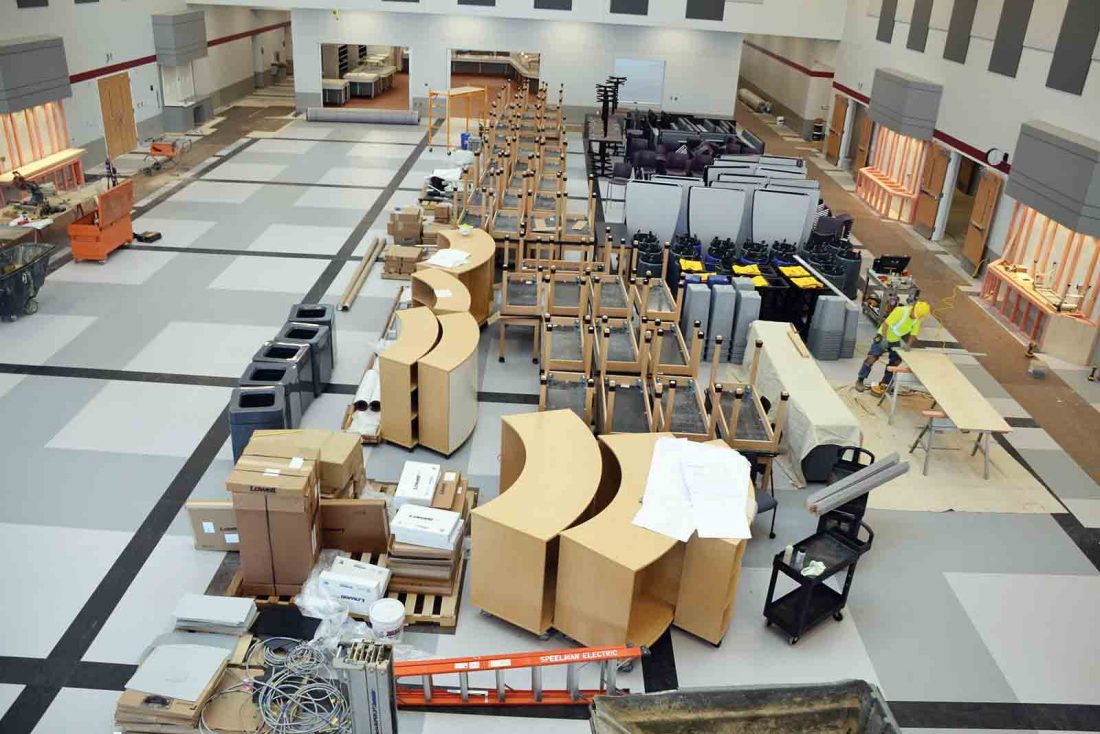 A workman marks a panel in the commons area of the new Carrollton Exempted Village Schools combined middle and high school building. (Photo by Michael Kelly)

The overall design is in the shape of a letter ‘H’, director of programs Ed Robinson said, with the central stem including common facilities such cafeteria, gymnasium and a 500-seat performing arts theater. The design includes the capability to close off classroom wings to allow public use.

“We want the community to come in here,” Robinson said. Quattrochi said the performing arts theater will be the only one of its kind in the county.

Workers continued finishing work and moving materials and equipment around as the tour progessed. The hallways widened at each end of the two-floor structure into common areas centered in clusters of classrooms with flexible dividers. A variety of seating occupied the common areas, tables in the classrooms were adjustable height, and nearly everything could be moved around to reconfigure learning areas quickly and easily. 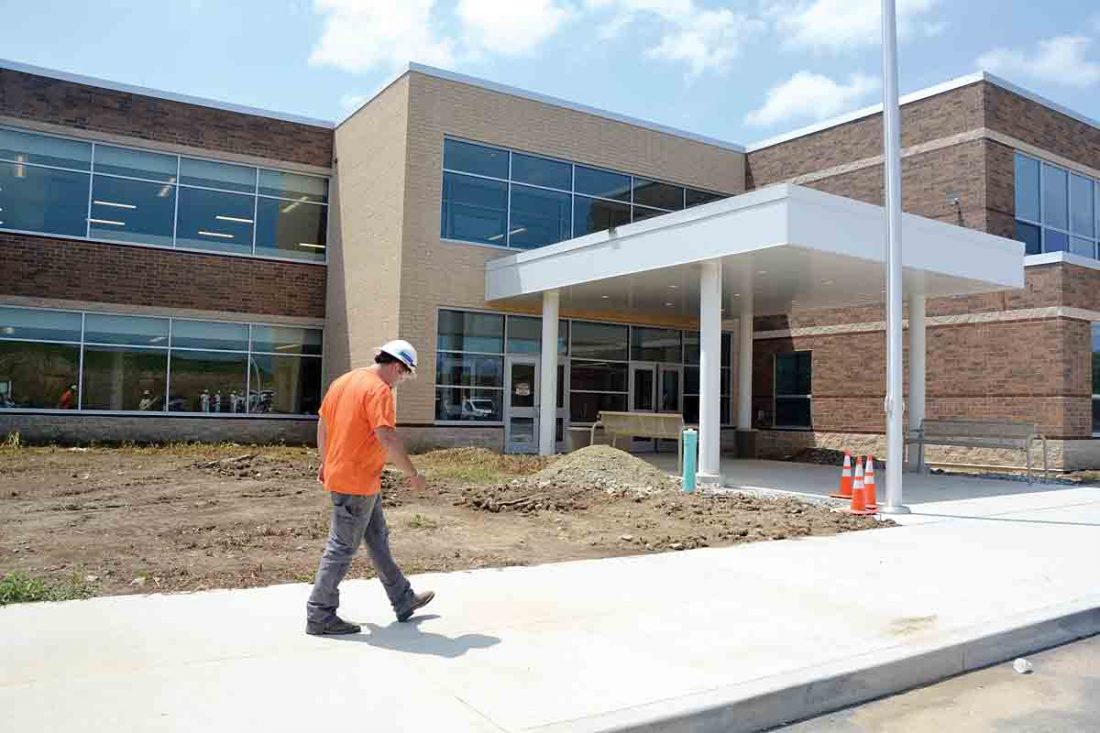 “I could see this as an English and social studies area,” said curriculum director Jona Hall, taking in one of the areas. “One of the others, maybe science and math.”

In parallel with the proposed building project, Marietta is taking an updated approach to education itself. Rote learning of facts is being replaced by project-based learning in which teams of students set out to solve problems, and the district wants its building designs to be conducive to group and collaborative work both by students and by teachers.

In Carrollton, they saw a 10,000-square foot senior high gymnasium, a smaller middle school facility, spacious locker rooms, a cafeteria and common area that doubles as a lobby entrance, and a big commercial kitchen with a concession stand built into one side of it.

Robinson explained the security system, in which all entrances are controlled from the front desk and numerous cameras monitor nearly all areas of the building. The vestibule entrance includes bullet-proof glass and is visible from the office area.

Quattrochi said Carroll County has its share of drug problems, with five overdoses occurring recently and meth making inroads into the area.

“We have two school resource officers, one of them with a full-time K-9,” he said. “We hope that’s more of a deterrent than anything.”

The design includes several intervention rooms, for students having problems who need to talk in isolation, and what Robinson called a ‘sensory room’, with padded walls and soothing pastel lighting for students in need of a calming atmosphere.

“I especially liked the security provisions,” Marietta board president Doug Mallett said after the tour. “The most important thing is to send our kids home safe at night.”

For Hall, the trip was worthwhile just to see so many ideas in concrete form.

“You get a better idea of the size and structure of it, and I was pleasantly surprised at how big the classrooms are,” she said.

“It was good to lay eyes on it, to see the potential,” he said. “That gives it relevance. It’s exciting to see what other people have done. The kids will want to come to a school like this, they’ll want to be here. It’s positive, it has no history.”

Quattrochi said the Carrollton staff is happy with the outcome of the project.

“We’re very pleased with the design,” he said.

During the process, he said, the team in charge of the project visited at least five schools to get a sense of the reality of some of the ideas they considered.

Carrollton, however, did not have to persuade voters to back a levy to build the school. The land had been acquired by the district in 1989 from a coal company, and Quattrochi negotiated a tax abatement agreement with Carroll County Energy, an oil and gas firm active in the area, that will give the district $1.3 million a year in revenue. That revenue was converted to bonds over 30 years to finance part of the building project, and the Ohio Facilities Construction Commission will pay the remainder. Local taxpayers have to pay nothing for the building project.

“The good lord has blessed this community, there’s no doubt about that,” Robinson said.

The district will, however, need a levy to build the elementary school.

Marietta City Schools has a community-based committee working on promoting a levy planned for inclusion on the November election ballot. The district is seeking $53 million to build, with OFCC participation, a three-element campus on vacant land currently owned by Washington State Community College.

Mike Kelly can be reached at mkelly@mariettatimes.com.