Photos by Brett Dunlap Crowds came out and lined the banks of the Ohio River in Marietta throughout the weekend for the 19th annual Riverfront Roar. People enjoyed powerboat racing, Hydro-Cross and more.

Although there was a bit of heat and rain Sunday, the 2019 Marietta Riverfront Roar came to a rousing and successful conclusion, officials said.

The annual powerboat races were held this weekend in Marietta on the Ohio River where hundreds watched the 19th annual Riverfront Roar, an American Power Boat Association sanctioned event.

Spectators watched the final races of powerboats and Hydro-Cross (jet skis) on Sunday afternoon. The racers and crews came from around the country.

A storm just outside of Marietta delayed races for a little bit on Sunday afternoon as the weather was making the Ohio River a bit choppy. The crowds only experienced a few moments of light sprinkles as rains stayed away.

Overall, organizers believe the weekend was a success. 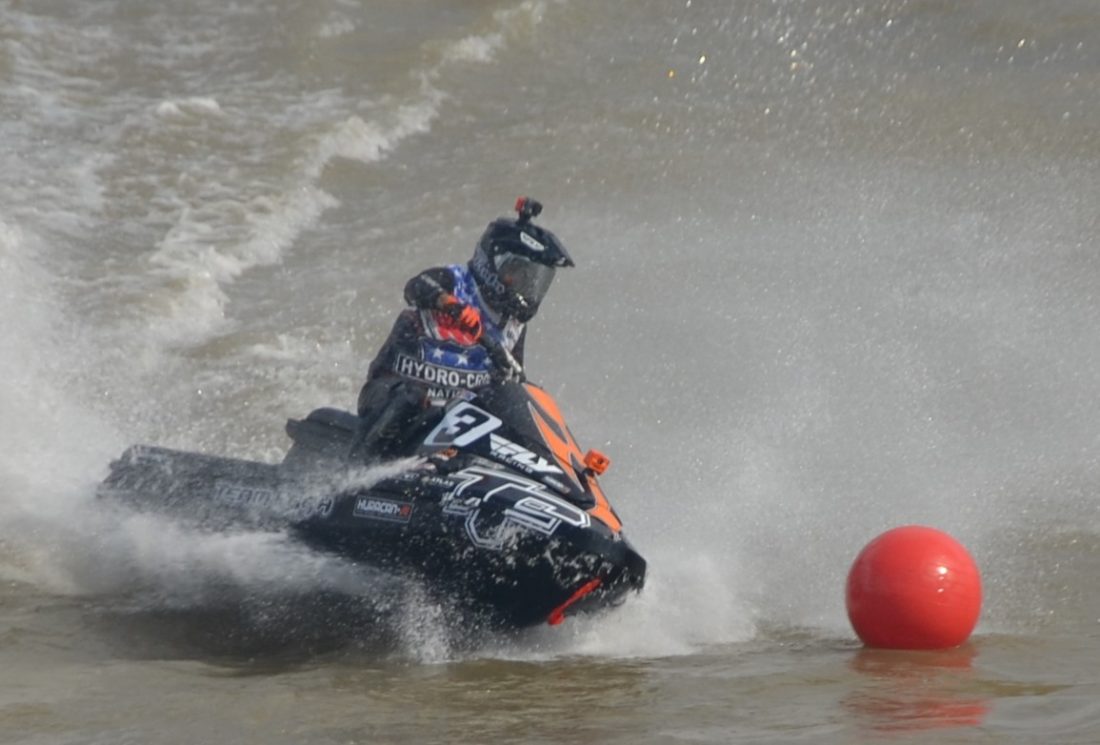 “I think the weekend went quite well,” said Riverfront Roar Committee Chairman Carmen Taylor. “It was hot, but we all survived.

“(Sunday’s rain) just cooled everything down and we got to finish our races.”

A couple of racers on Sunday had mechanical issues. Jamie Duran had a mechanical failure before completing the first lap in the final powerboat race. Jeff Reno was leading for 27 laps (out of 30) when a mechanical issue took him out of the final race. Some river debris impacted one of the hydro-cross racers.

“There is always little hiccups here and there,” Taylor said. “Some of them are more visual than others.”

Michael “Hurricane” Floyd, of Rincon, Ga., won the final powerboat race. As he was taking his victory lap, he ran out of gas and had to be towed to shore. 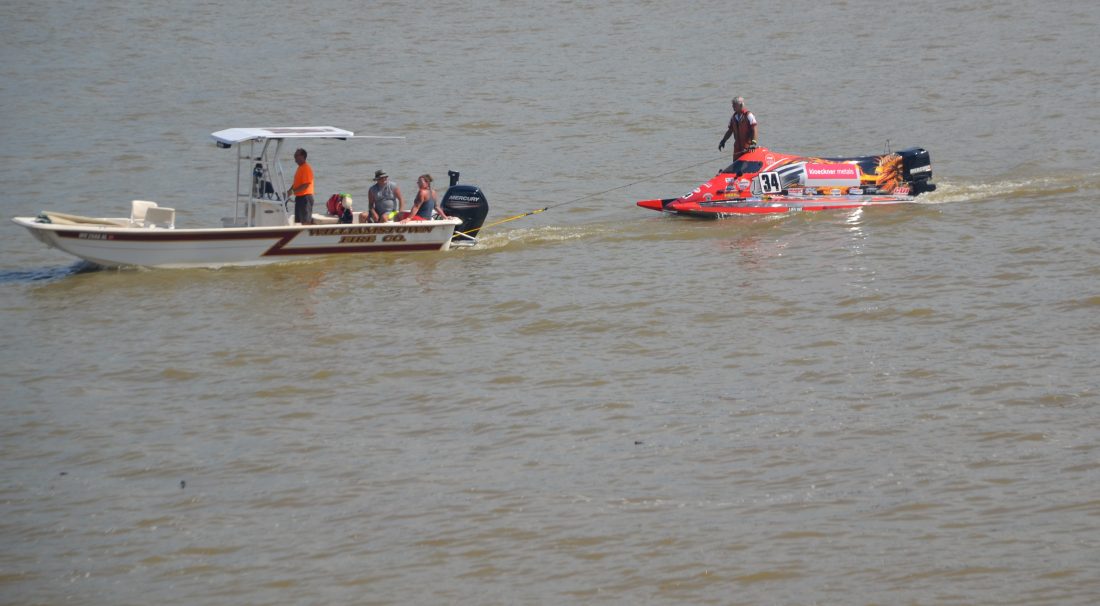 This was the first time Floyd had returned to the Riverfront Roar as a racer since 2014 when he blew a gearcase off his boat. It was before that race he learned his wife was pregnant. The following weekend he went to Huntington where he crashed.

He decided to get out of racing for a little bit and concentrate on his family. At the time of his crash, Floyd had another boat being readied and it has been sitting in the shop for the last five years.

“We rigged it, wired it and painted it and brought it here,” he said Sunday. “It is the first time it has ever been in the water.”

The builder assured him it was going to be an “awesome boat.”

“I have been coming here since 2002,” Floyd said. “This is a great place for me to climb into a new boat. 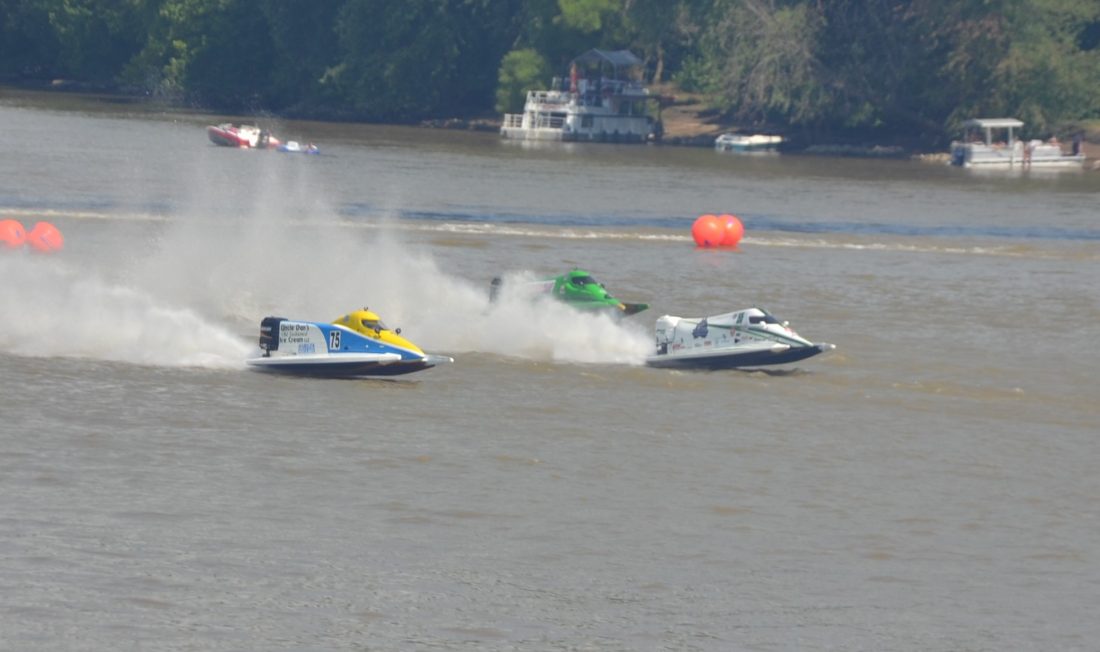 “I know this place. I know the water. I have raced here several times. This is a good place. If I want to figure out how to run a boat, this is where I bring it.”

Taylor was happy with the spectator turnout, comparing it favorably to the previous years.

Many people who came wanted to see something they hadn’t seen before while others had attended previous events and wanted to see it again.

Traci Johanning, of the Lower Salem area, said she comes out about every year.

“It is something to do and we like watching the races,” she said. 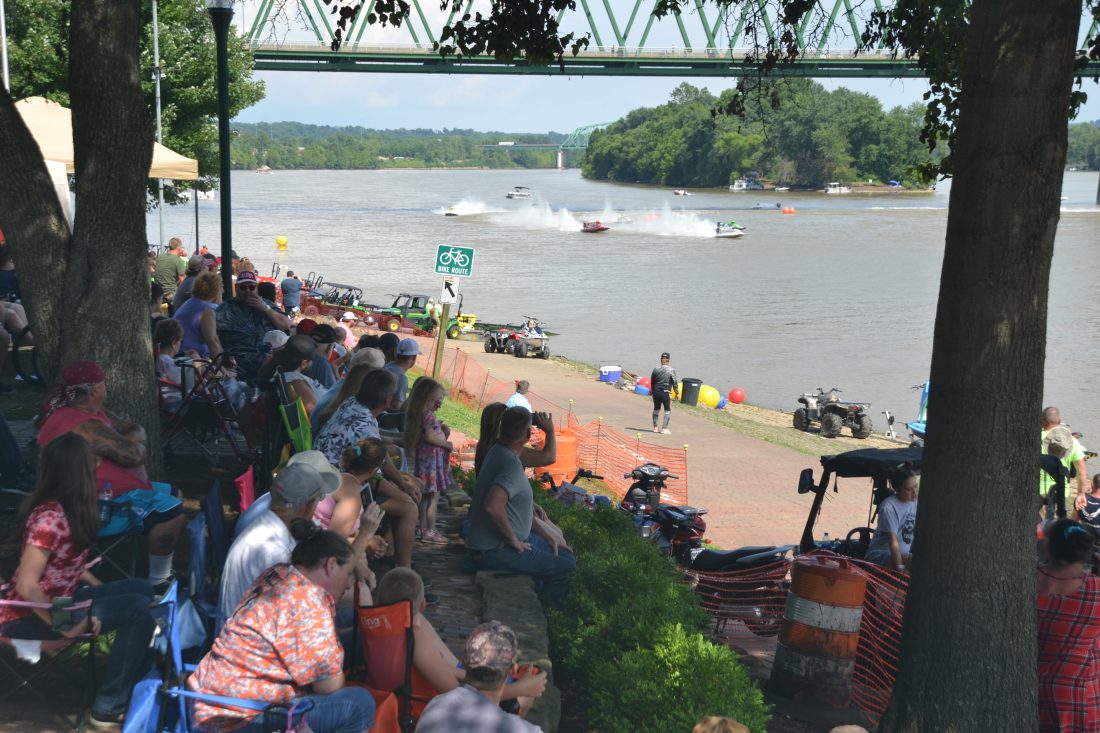 Photos by Brett Dunlap Crowds came out and lined the banks of the Ohio River in Marietta throughout the weekend for the 19th annual Riverfront Roar. People enjoyed powerboat racing, Hydro-Cross and more.

Kenny O’Brien, also of the Lower Salem area, said he came out for the “food and boat races.”

Pam Riley, of Athens, Ohio, and her friends came out to watch the boat races. Although they come every year for the Sternwheeler Festival, this was the first time they attended the Riverfront Roar, she said.

“It was exciting,” she said.

One friend she was with who did not wish to be identified said he liked the fast pace of the races.

George and Christie Eckelbarger, of Zanesville, likes boats and had never seen powerboat racing before.

“It was pretty neat,” he said. “I liked watching the big boats run.

“It is fast with a lot of boats on the field.”

The couple come to Marietta often, having breakfast at the Lafayette Hotel.

Taylor gave a special thanks to her 12-member committee that works all year to put the Roar on.

“This is not a one person show,” she said. “They work tirelessly all year long to put this on.”

The crowds are a boost to many downtown businesses, she said.

Taylor talked about a couple from California who saw the races in Marietta last year and returned this year to see the races again.

“They loved the boat races so much, they came back this year just to see the races again,” she said. “It brings people in from all over the United States.”

The event brings in something that a lot of people don’t regularly get a chance to see often.

“I think it brings in a different type of entertainment that we don’t usually get to see here,” Taylor said. “We have the river and it is great.

“It brings in people from all over.”

Brett Dunlap can be reached at bdunlap@newsandsentinel.com