Summer a time for projects at area schools 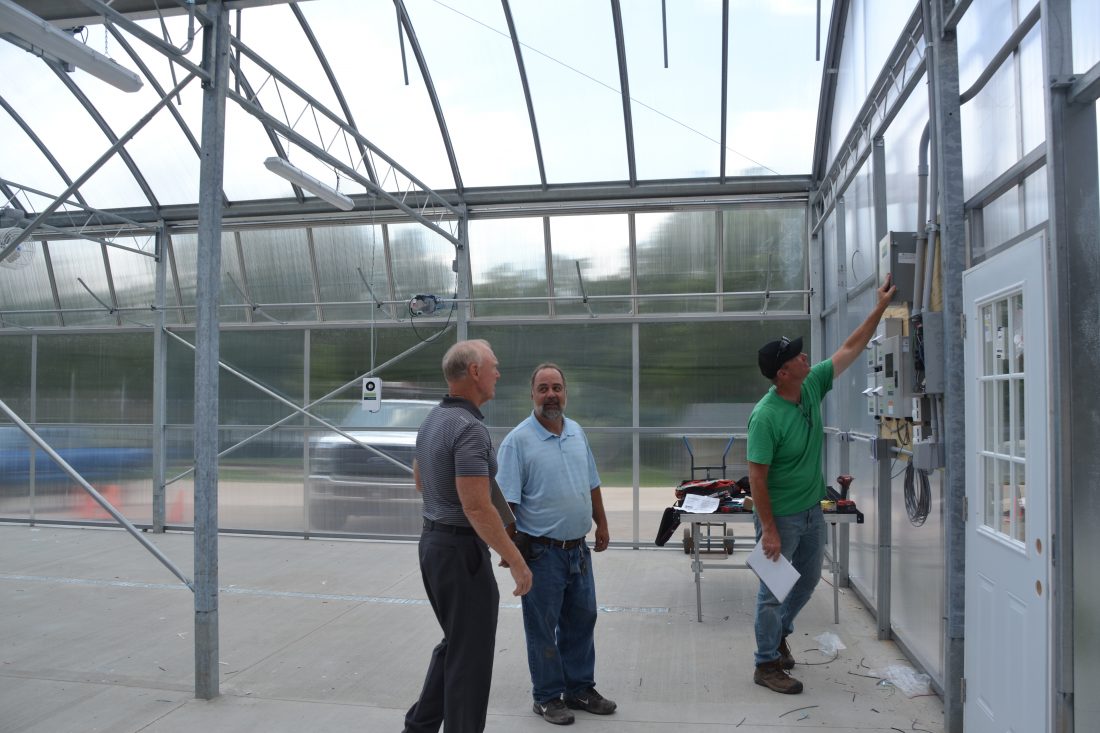 Photo by Michael Kelly New electrical circuits run along the walls of the remodeled and re-equipped digital marketing and media lab at the Washington County Career Center.

Photo by Michael Kelly Four new welding stations were installed in the welding room at the Washington County Career Center. The school expects new welding equipment to arrive for installation before classes resume in the fall.

Students at the Washington County Career Center will see some new elements at the school when classes resume in the fall.

“We built a new greenhouse,” superintendent Dennis Blatt said Wednesday. “The other one had been here since the school was built, in 1972.”

The greenhouse, about 1,500 square feet with modern climate controls, will be used by students in the landscape and turf management program for horticulture, growing accent plants for landscaping projects, Blatt said.

The greenhouse required two years to complete, treasurer Joe Crone said, and including the structure, foundation and other work cost about $150,000. 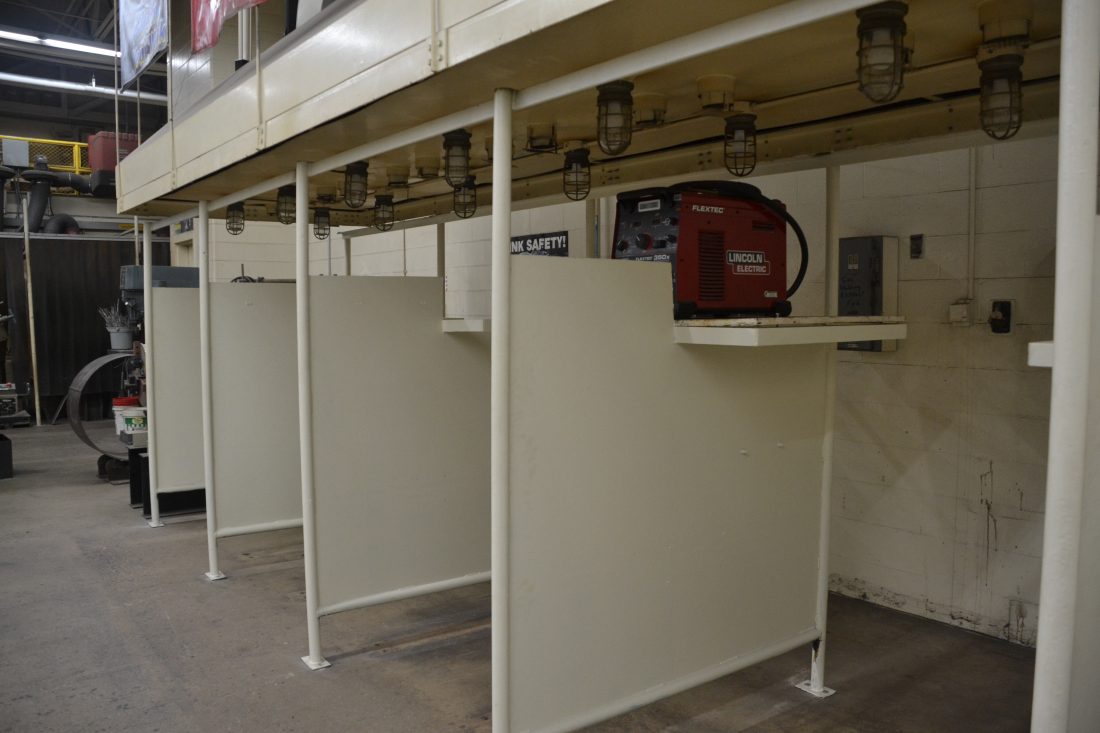 Photo by Michael Kelly Four new welding stations were installed in the welding room at the Washington County Career Center. The school expects new welding equipment to arrive for installation before classes resume in the fall.

The increase in demand for welding instruction, along with changes in welding technology, is being met with four new, fully-equipped welding booths, Blatt said.

More students also are enrolling in the center’s digital marketing program, and over the summer the digital lab was completely redone, with new flooring, wall finishes, equipment and internet access infrastructure.

“We’re always trying to upgrade the technology, and we’ve redone this lab from top to bottom. It’s just a more pleasant place,” he said.

On the adult technical school side, he said, the commercial drivers license program will be up and running, including some new vehicles.

The school’s two main buildings have recently completed facades and new landscaping facing the parking lot, a project Crone said started in the winter when the existing facade began to sag. 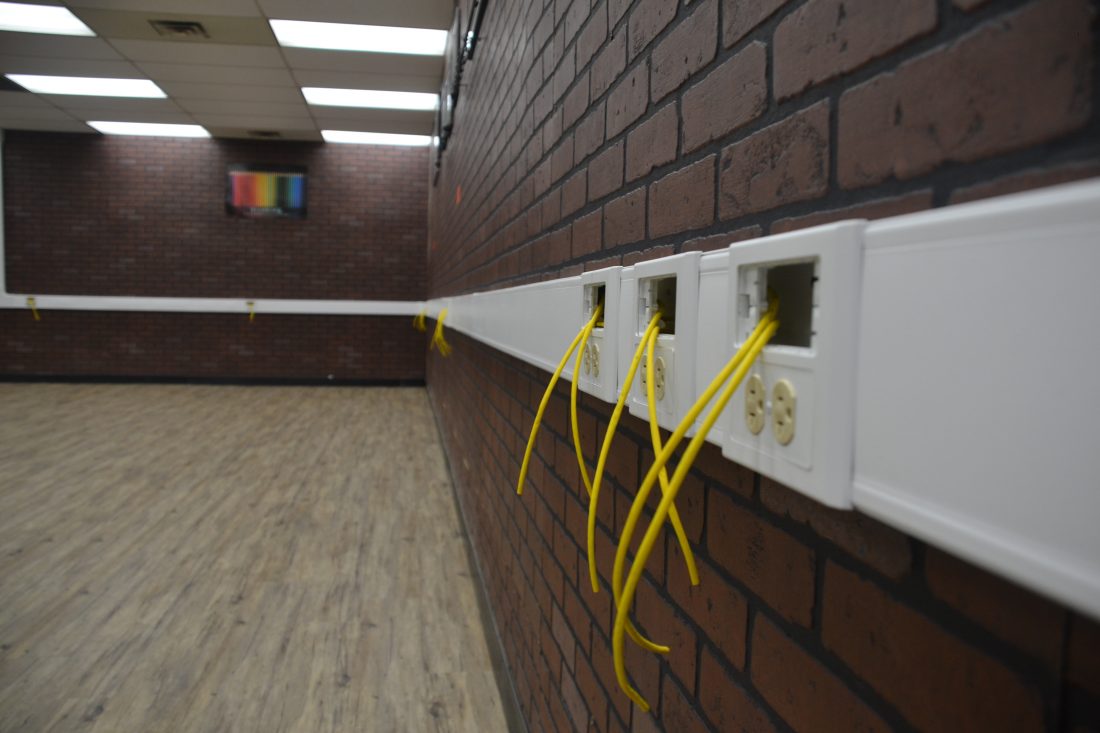 Photo by Michael Kelly New electrical circuits run along the walls of the remodeled and re-equipped digital marketing and media lab at the Washington County Career Center.

Blatt said the main thing students will find when they return is an increased emphasis toward positive thinking at the school.

“One thing we’re proud of, that we really worked hard on last year, is our new vision statement, ‘Inspiring and empowering all to dream, believe and achieve.’ and we do everything to make that a reality, not just for students, for all of us,” he said.

In Marietta City Schools, no major projects have been undertaken, pending the results of a bond issue on the ballot in November. The district hopes to be able to rebuild entirely on a site near Washington State Community College and is holding off investing heavily in the aging buildings it now occupies.

Operations and maintenance director Darrell Prim said the district is continuing its program to place portable air conditioners in schools, with an emphasis this summer on getting them into all classrooms in the elementary schools.

The new scoreboard at the Glendale Road stadium is finished and just awaiting work on its electrical connections, Prim said. The project was made possible by assistance from several local businesses.

“We’re doing a lot of painting in the buildings – we totally repainted the middle school football locker room and added some electric, put in a washer and dryer,” he said. “Other than that, just the basics, custodians working to clean everything, washing and waxing the floors in the classrooms.”

At Fort Frye Local Schools, the board, administration and community are reviewing facilities and education through a visioning process, superintendent Stephanie Starcher said.

“We are now at the master planning phase which will begin this fall. Because of this, the district did not do any significant facility projects this summer because we did not want to make a bad investment decision depending on our long-term facility plan,” she said. “Therefore, we are completing minor HVAC, sewage, water and electrical repairs as well as replacing some ceiling tiles and doing some painting at each site. We are also adding more security cameras.”

“We’re updating the teacher interactive boards, but it will be completed in phases due to the cost and the number of boards that need to be replaced,” he said. “The fencing at Newport (Elementary School) was upgraded because the previous fence was in disrepair. There will be painting at the middle and high school building, and paving around the football field because the current walking path isn’t safe. Other projects are just general cleaning.”

At Wolf Creek Local Schools, treasurer Rachel Miller said, little other than typical summer maintenance and cleaning is going on over the summer.

“We’re getting some upgraded furniture for the classrooms and cafeteria, but no renovations,” she said.

At Warren Local Schools, the $63 million building project has shelved any major work on its existing buildings.

“We have very little going on, besides that of regular summer cleaning,” superintendent Kyle Newton said. The district broke ground on its new elementary school in April and is partway through the bid approval process for the new high school.

Belpre City Schools superintendent Jeff Greenley could not be reached.