Levy success would mean the loss of neighborhood schools 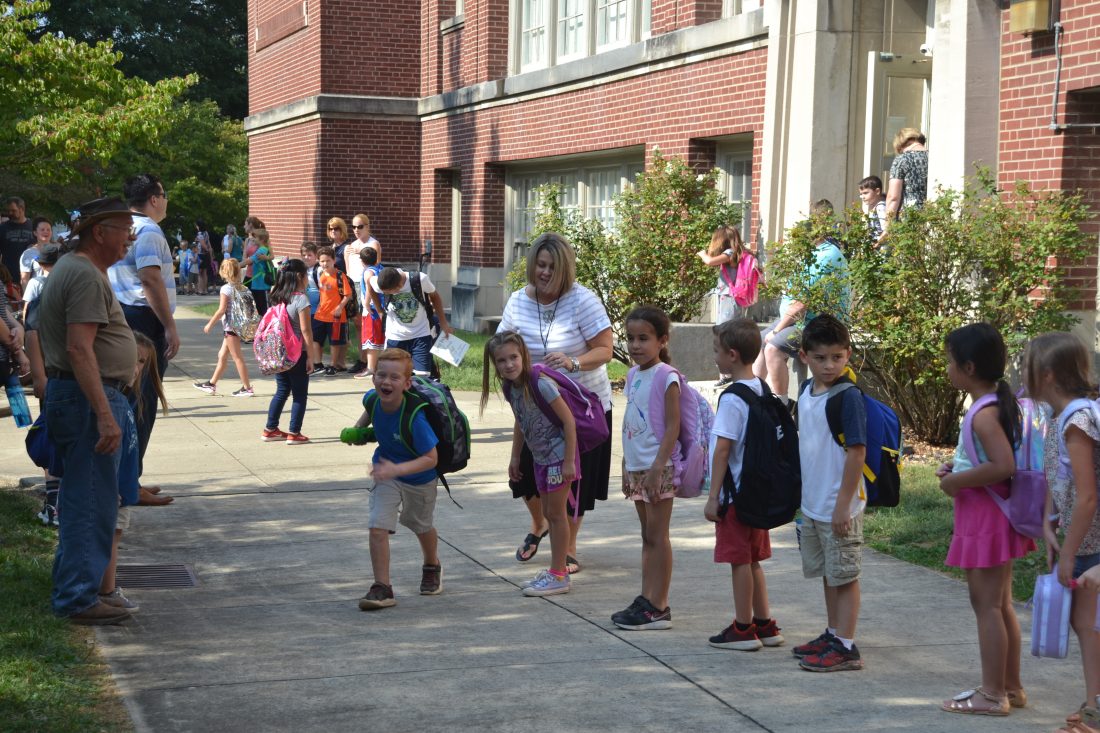 Photo by Michael Kelly Children are dismissed at Washington Elementary School Thursday afternoon and met by their families and caregivers. The prospect of new buildings for the district, up for approval by voters Nov. 5, would mean the loss of neighborhood public schools in the city.

If the $55 million tax levy proposed by Marietta City Schools is approved Nov. 5 by voters, it will mean a new era in education for the city, but it also will mean that four elementary schools and their influence as a center of gravity for neighborhoods will become a thing of the past.

Phillips, Washington, Putnam and Harmar schools, the newest of which is nearing 70 years of age, would be abandoned as part of the plan to consolidate all elementary grade students at the new structures to be built near the Washington State Community College campus on Colegate Drive. The change would be several years away, but it would still mean that parents living in the neighborhoods now served by those schools would not walk their children to school, and their children would not form the same kind of bond particular to attending school with their neighbors.

On Thursday afternoon, Jon Standifor sat in his white sedan parked on Fifth Street around the corner from Washington Elementary, waiting for his first-grade son to come out of school. The family lives three blocks away from the school, but Standifor said the effect of moving to a consolidated elementary on the hill off Colegate Drive, as the levy proposes, would actually have a positive effect for him – he works at Washington State Community College, adjacent to the site where the new schools would be built.

“I’m more concerned about what they plan to do with the old buildings,” he said. “I’m a numbers guy at the college, and I know that the levy project would pay for itself in the long run. This isn’t about me and you, though. Our kids’ future is what it’s about.”

Rachel Marshall and John Barker, sitting at one of the tables outside Washington, waited for the bell to ring. They were there to pick up three of their children – kindergarten, second and fifth grade – while entertaining their toddler, a student-in-waiting.

“We live close to both locations, so it’s not big difference for us as far as that’s concerned,” Marshall said. “But it seems like that bigger school would be stressful for the kids. They enjoy it at Washington, and I wouldn’t want them to lose that. I don’t think (the levy) is worth it, too many kids, too much in one place.”

Emily Styer was waiting for her son, who is in his third year at Washington. The family lives in the neighborhood.

“If they move it, it wouldn’t be as convenient, but I think the safety of our children is more important than convenience,” she said. “My son really enjoys it here, but I don’t think he’d mind if he was still with his teachers and his friends.”

At Putnam Elementary School in Devola Friday morning, Brittany Schramm was dropping off her fourth grader. Although her son attends Putnam, the family lives in the Washington school neighborhood, and she also has a child at Marietta Middle School.

“I’m a bit torn because I love old buildings, and Washington is really the heart of our neighborhood. New schools would be excellent for our kids, but I wonder how it would affect our historic neighborhood,” she said. “But I’m going to vote for the levy. You put your money in what you value.”

On Ellsworth Street in Devola, Brandy Barengo and neighbor Rosie Fourman were having a morning chat in the Barengo driveway.

Barengo has a child attending Putnam, only a couple of blocks away. She likes the intimate and connected feeling of a neighborhood school.

“I know the secretaries at the school, they know our family, and I’d hate to lose that sense of community,” she said. “I’m up in the air on this. I don’t think a bigger school is the answer.”

Fourman, who is retired, said she’s concerned about the additional tax burden, particularly with the looming uncertainty of additional costs associated with the Devola sewer project.

Cheryl Cook has been principal of Harmar Elementary School for decades. She has seen the children of students she used to oversee come to the school, and she understands the attachment people can feel to their schools.

“Harmar is not unique in that way. There are pockets of people in every attendance area that have long roots associated with their schools,” she said. “We see that in intradistrict requests from people who want their kids to go to the same school they did … it means they have good memories, positive experiences, and they want to perpetuate that.”

For Cook, the move would be personal as well.

“I’ve enjoyed so many years here, I’ve built roots here, too,” she said. “At every professional development session we attend, that we read about, we’re told everything begins by making relationships, and those will still exist but we will have to work hard for a while, especially in that location. It’s really going to be removed, and part of the visioning process is that the facility itself has to be structured in a way that makes it accessible and regularly used by the community. The structure itself will only support the efforts made to welcome people and make them feel comfortable.”

For the west side neighborhood where Harmar is located, the removal of the school would need to be offset by development of another center of gravity for the community, said Marietta City Council member Geoff Schenkel. Schenkel represents the ward that covers the Harmar area.

“At its base level, it’s been an important institution for decades upon decades, it’s created a kind of cohesion that will be missed when it’s gone,” he said. “I think we have struggled as a community for a very long time to come up with a solution to improve our schools, and I understand why we are going in that direction. I appreciate and support that, but part of me mourns the loss of neighborhood schools, and I wonder how we are going to fill that void.”

Schenkel said the community has other meeting grounds being established – the Main Street West group meets monthly at the Gilman United Methodist Church, and the Boys and Girls Club on Lancaster Street has become a gathering place for youth and their families. The area is also home to the Gospel Mission and the Building Bridges to Careers Epicenter.

“To some degree there’s an intentional effort to strengthen the connections between neighborhood institutions, there is a group of residents that sort of bounces around among them, and that serves as a little bit of glue. That will become more important when the school goes,” he said.

Many residents have wondered what will happen to the old schools, should the levy pass. By law, the district is obligated to give community schools – defined in Ohio as public schools that are independent of districts and receive state and federal funding, such as charter schools – first option to purchase surplus schools. If no interest is expressed by those institutions, the property can be sold.

The Marietta City Schools district has a history of contraction over the past two decades. Reno and North Hills Elementary schools closed in 2000, with Norwood and Oak Grove schools closing years before that. The Reno building is now a community center, as is the Oak Grove site. Norwood Elementary is now a Head Start center, and North Hills Elementary was sold to a developer in 2012 for $61,000, with the developer assuming demolition and environmental abatement costs.

It is not known what will happen to the current schools if the new complex is built, but some obstacles exist. Harmar and Phillips elementaries are both 1950s-vintage buildings that sit in the flood plain, and Washington, built in the 1920s, is a building owned by the district that sits on land owned by the city.

Schenkel said Harmar, which is built with a commanding view of the Ohio River, would be a prime development location.

Cook said the prospect of closing schools is the emotional side of the levy issue.

“I was at Reno for five years as a teaching principal, and I remember that real feeling of community, people saying, ‘You’re our principal, this is our school, we’re going to take care of you.’ It’s a powerful feeling to have the community behind you, supporting you, the power of these neighborhoods,” she said.

The buildings have a richer history than their structures, she said. They have the lingering spirit of significant events in individual lives.

“It’s sad in a way, like when you build a new house and say good-bye to your old one,” she said. “You know you’ve made the right decision, but it’s hard to leave those memories.”

For information on the levy, see MCSLevy. org.