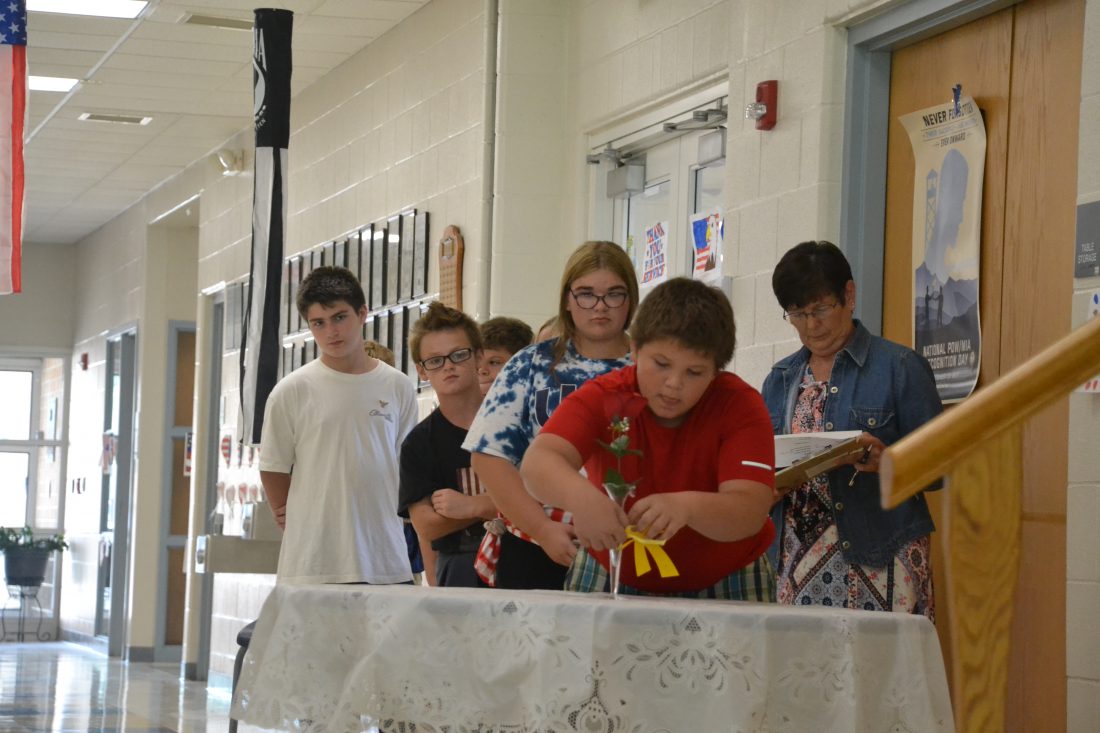 Photo by Michael Kelly Students at New Matamoras Elementary School on Friday ceremonially prepare the Missing Man table, meant to remind people of warriors who never came home and whose remains have not been found. The school for more than 30 years has held an annual tribute to POW/MIA veterans.

NEW MATAMORAS – The children stood by the table at the entrance of the school to greet each guest, handing out programs and explaining their handiwork in the display. More than two dozens cubes, of a size that could comfortably fit in a hand, stood in tiers on the table.

Dale Wells, Aidan Wolfe and Aubree Dunn, all sixth graders, were among students who had created the biographical tributes to individual veterans. Nearby stood Chelsea Lang and Emma Routt, handing out programs.

It was the start of a tradition at New Matamoras Elementary School that goes back more than 30 years, honoring POW/MIA day and the local veterans. Out in the village, homes and businesses were decked out with flags, and an enormous black POW/MIA banner topped the school entrance.

The annual event is a full-school assembly that lasts more than an hour, as students read tributes to veterans, ceremonially compose the Missing Man table and hear stories from the veterans.

Lang, a fifth grader, said she looks forward to the program every year.

“I like it because I get to meet people who served our country,” she said.

“I like how people come in and tell us what happened,” she said.

Earlier at the VFW post in the village, a group of veterans held a quiet lunch. Herman Zerger, now 95, spoke as he ate, recalling his time in World War II.

Zerger fell a few months ago, breaking a hip, wrist and two ribs.

“The doctors told me I was too old to operate on,” he said with a laugh. Zerger is one of many guests at the annual POW/MIA event and treasured as one of the few remaining World War II veterans.

“I’m the only POW left in Monroe County, and the last at this VFW,” said Zerger, who has lived his entire life in Woodsfield. The village last year honored him with a four-page resolution “for his choices and actions as he has led and continues to lead his life with the highest values of honor and service.”

Zerger said he remembers his entire experience in the combat zones of Europe. He enlisted in the Army in 1942, a week after graduating from high school.

“I was over there for three years, in combat the whole time,” he said. Zerger was promoted to Platoon Sergeant Company I, 141st Regiment, 36th Infantry, the “Texas Division.”

He was taken prisoner during a push to cross the Rhine River in February of 1945.

“”Our rifle company was making an attack, but they counterattacked with tanks and we couldn’t hold them. Those who weren’t killed were taken prisoner,” he said. “They took us over the Rhine in a barge.”

“I always had chocolate on me, I’d trade cigarettes from my rations for it to the other guys,” he said. The officer who captured him removed his grenades and one of his chocolate bars but didn’t take the rest of them.

“I’ll never know why he left the rest of the chocolate, but I think that’s what kept me alive in the prisoner of war camp,” he said. “They fed us something I call weed soup – it was just some grass and weeds boiled, it seemed like – but I’d take a bite of that chocolate now and then.”

Zerger was in the camp 95 days and lost 35 pounds. The camp in Austria was the last to be liberated by Allied troops, in May 1945.

“There’s very few of us left, POWs from World War II,” he said.

When asked what message he would most like to give the students, he said, “Get your education, they can never take that away from you.”