Five meetings down, 13 to go as Marietta prepares for November 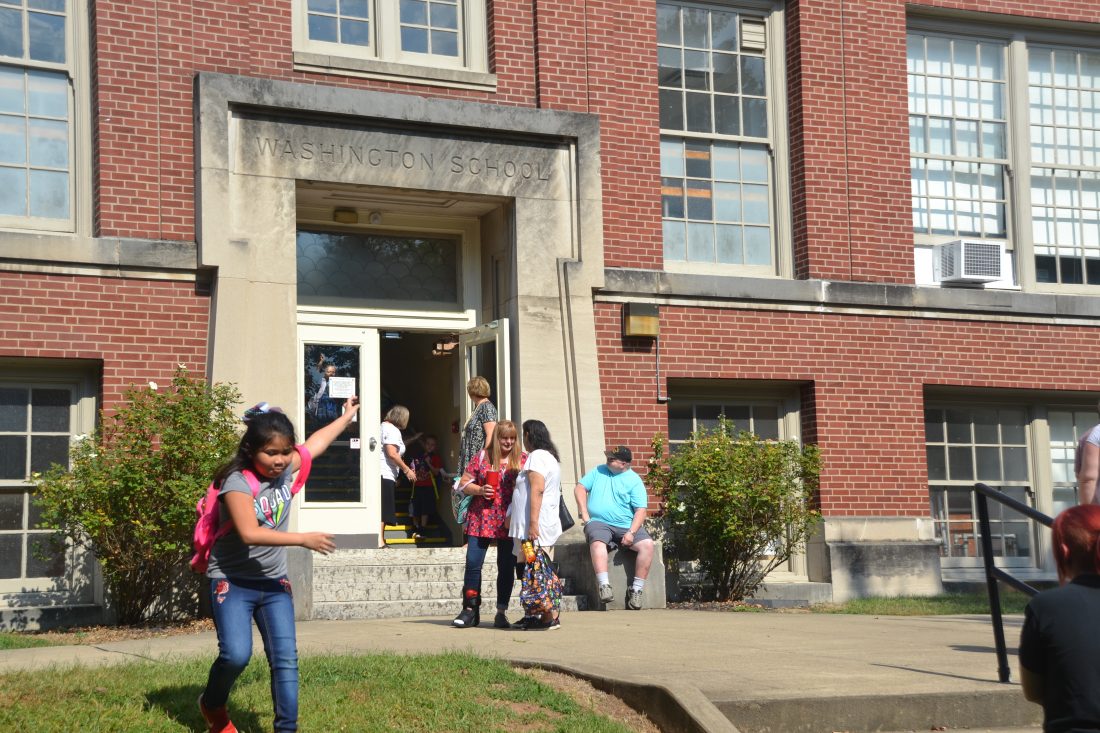 Photo by Michael Kelly Children come out of Washington Elementary at the end of the school day. Voters in Marietta will decide Nov. 5 whether to approve a proposal to build a complex of new schools adjacent to Washington State Community College.

The fifth public meeting on the Marietta City Schools levy proposal attracted five people, at least four of whom were from the Colegate-Glendale neighborhood, who engaged Russ Garrison, the board of education vice president, and Frank Antill, the district treasurer, in a freewheeling discussion for the full two hours of the meeting.

The primary concerns of the residents were the impact on traffic in their neighborhood – the district is proposing to build an $85 million school complex on land next to Washington State Community College – and whether the new buildings would result in better education and better results for students.

“It’s very narrow, there’s no berm, and people just fly down that road,” she said. “It’s the same on Colegate. I don’t know how it would handle buses and parents driving their kids in. On Glendale, I already feel like I’m taking my life in my hands to pull out of my driveway. This really is like giving you a blank check.”

Garrison said traffic and engineering studies would come if the levy is approved. Otherwise, the district would have to spend hundreds of thousands of dollars on reports and expert analysis out of its current operating budget without any assurance the studies would be used.

“It’s important to understand where we’re at in the process; we’re at the high-level planning stage,” he said. “We ask voters for the money, then hire architects and engineers. We can’t spend permanent improvement fund money on those expenses.”

Garrison said the district recognizes that traffic will need to be addressed.

“An important aspect is to design that traffic circulation so that it is captured inside the campus, not on the roads,” he said. “That goes into the design of parking lots, drop-off areas.”

“I’m here mostly to make sure this levy doesn’t pass,” he said. “The buildings we’ve got are fine. I don’t want the traffic, I don’t want the taxes. We’ve got beautiful schools already; we just need to maintain them. Take a year or two, prove that (elementary school) consolidation idea works. You’ll never get around the traffic problem.”

Ferguson also contended that new schools would not by themselves mean improved education.

“I don’t want to hate on everybody. I know we’re trying to do right for the kids, but you can take the kids who are taught to read when they’re four years old and school them in a tent, and they will be successful,” he said. “If you don’t do that (teach them to read at age four), it doesn’t matter how fancy the building is … I’m not anti-progress, I’m an engineer. The traffic problem alone should be the end of this. I can’t even imagine the rights of way you’d have to tear out.”

Ferguson suggested that the district try a “levy light” for a much smaller amount of money to repair the existing buildings.

Garrison had said earlier that the district needs to change its approach to meet the changing needs of all its students, and the advantages of having all the students and resources, including teachers, counselors, nurses and mental health professionals, in one location are numerous.

“We have to be different to meet changing demographics; we have poverty and the challenges of drugs and families. This year for the first time we have more than 50 percent of students who are economically disadvantaged,” he said.

Locating within a short walk of the college, he said, would provide encouragement for middle schoolers as well as high school students.

“When we do surveys of graduating seniors, the top category of what influences them is personal experience. A big part of the attraction for this plan is for fifth to eighth graders; transportation is no longer an obstacle; they can go down the hill (to the college) and back up in one class period; it doesn’t disrupt the whole day,” he said.

Garrison told the group that detailed design elements would be the subject of community visioning sessions after the levy is passed.

Wolski, like many in the community, wondered about the possibility of continuing with the existing buildings.

“If this (the levy) fails, we all know those buildings are not in great shape, and I think it would be hard for kids to learn in them. Where would the money come from to fix them?” she said.

“The voters who vote against this because they don’t want to pay more won’t vote for renovation of those buildings either,” Garrison said. “We live in old, crumbly buildings with inadequate air conditioning. If the levy fails, we would spend November and December trying to figure out how to shrink our footprint, which buildings can go. Our permanent improvement levy of $1.25 million a year covers maintenance, buses, computers, curriculum materials, and there’s not enough in that fund to deal with those buildings.”

The district’s existing buildings are now operating with about 60 percent of the number of students they originally were designed for. The oldest was built in 1912; the most recent opened in 1964.

“We don’t want to sound threatening, but regardless of whether the levy succeeds, neighborhood schools will be lost, either through consolidation or grade banding … the benefit of moving everybody together is the best option,” Garrison said.

After the session, Garrison said between four and 10 people have attended each of the five meetings held so far.

“The meetings all seem to have had their own sort of personality,” he said.

The next meeting is scheduled Thursday from 10 a.m. to noon, and 12 more are scheduled after that. The meetings all are being held in the basement meeting room of the Washington County Public Library main branch.