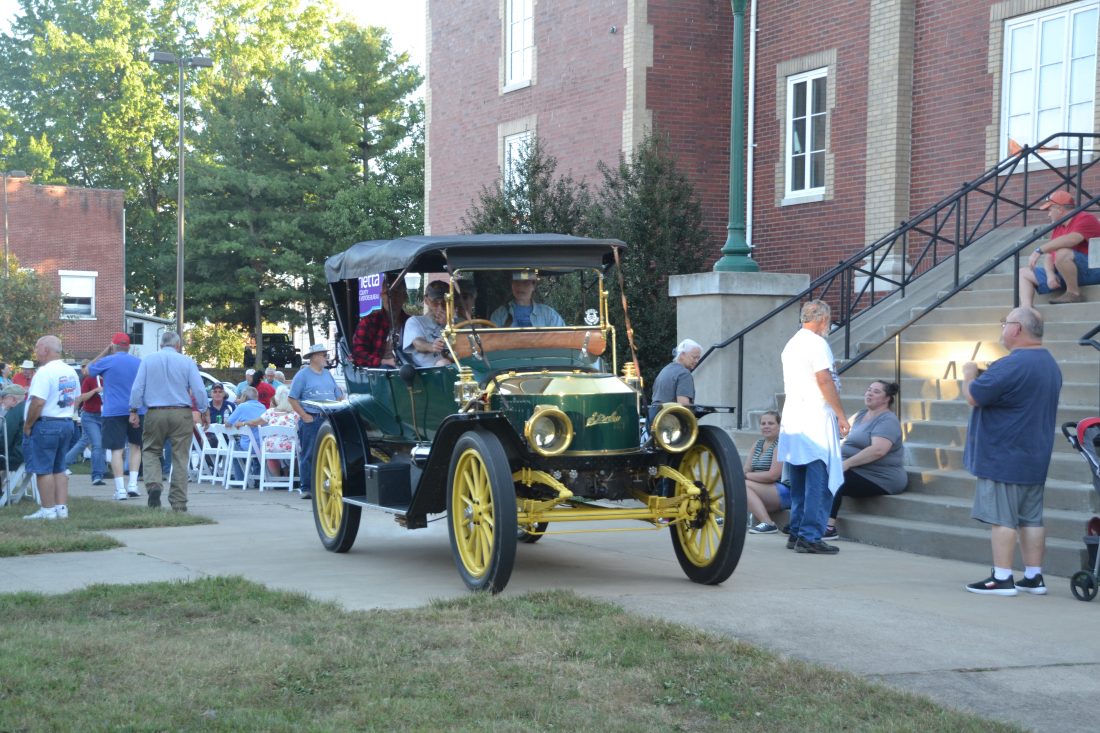 Photo by Michael Kelly A Stanley Steamer rolls past the front steps of The Armory to park in a line of the vintage cars on display Wednesday night. The caravan of cars was on a tour of the area by members of the Midwest Steam Car Club.

Quietly huffing like small locomotives, with a bit of mechanical clank to go with it, steam-powered antique cars could be seen coming and going around Marietta this week. The Midwest Steam Car Tour is in town.

The 18 vehicles on the tour, all Stanley Steamers, range in origin from 1904 to 1924. The owners have come from Texas, Illinois, Michigan, Massachusetts and Ohio, towing their carefully restored Steamers in trailers to enjoy the countryside and ambience of the Mid-Ohio Valley. The late summer tour, visiting a different part of the nation each year, is an annual trek for the club.

This year’s expedition was organized by Elyria resident Herb de la Porte, who said he established a special connection with the Marietta area decades ago.

“My wife and I used to ride bicycles a lot in the 1990s, and we went on a couple of tours with the Marietta rowing club. That was my favorite ride in Ohio,” he said Wednesday. “I kept coming back, absolutely fell in love with the place. I hadn’t been here in 20 years, and I volunteered to organize this year’s tour.”

The group, headquartered at the Baymont Inn on Pike Street, has driven around the city and through some of the West Virginia hill country, and paid several visits to Parkersburg. On Wednesday, the cars were on display for a while at the Oil and Gas Museum and planned to stop at Henderson Hall before driving to Marietta for a show on the lawn at The Armory. The tour will finish with a drive through Morgan County on Thursday.

Some of the cars are more than a century old, and breakdowns are not uncommon. On Wednesday morning, Carolyn Hoke and her husband, Donald, remained behind in the Baymont parking lot as Donald worked patiently to fix a clogged feed line on the fuel burner of their 1924 Steamer.

The couple, residents of Dallas, Texas, became steam car enthusiasts in 2004, Carolyn said, when they attended a festival in the tourist town of Fredericksburg. They noticed a sign advertising a steam tractor show, and at the rural farm exhibition saw a Stanley Steamer.

“He saw it all the way across the field,” Carolyn said. “We got a ride on it, and that was it.”

They had received windfall inheritances from an aunt and bought a Steamer at auction from New Jersey the following year.

“That’s where the name came from, Betty Ann. We worked on it in bits and pieces over 10 years,” she said.

The car burns kerosene to heat the fuel, which boils the water for the steam. Carolyn said it’s an enjoyable car to ride in, but stops to replenish water have to be planned, and frequently – about every 20 miles.

“You get to the point where you look for things like people watering their lawns, and stop to ask if you can fill up,” she said.

De la Porte said the community has responded with friendship and generosity to the tour.

“I am so tickled with the way the community has greeted us, everything is absolutely spectacular,” he said. “The roads are beautiful, and people have been so incredibly helpful. I had a breakdown today, and everyone did everything they could to get us back on the road.”

The topography around Marietta wasn’t a problem for the cars.

“These steam vehicles were built for hilly terrain, they first appeared in New England,” he said.

On Wednesday night hundreds of people gathered to stroll around the parked steamers on the grounds of The Armory at a show organized by American Flags & Poles. The aroma of pizza wafted through the warm air, tinged with an occasional whiff of kerosene.

Brent Kesterson came over from Parkersburg to see the show.

Pam and Fred Huck of Marietta were just wandering into the show.

“I like it,” Pam said. “They run on water and have those gas lights. I’m waiting to see the lights turned on when they leave.”

Cal Malcom and his friend Werner Zoller drove over from Williamstown.

“I love this, you’d usually see something like this in a museum, and to see so many in one place is amazing. The nice thing is, they run these,” Malcom said.

Steam cars, as well as electric cars, competed in the market with gasoline-powered cars up through 1915, when gas cars fixed their main consumer complaint by replacing hand-cranks with electric starters. The final blow came when Henry Ford and his assembly line methods cut the cost of gasoline cars to about one-sixth of the steam cars. Stanley retired from the market in 1925.

During their time, the steam cars were the apex of transportation technology. One set a land speed record in 1906 of 127.6 miles per hour. The record stood for four years. Interest has revived with the development of modern materials that would reduce the weight and include a condenser to recycle the steam back into the water boiler. The vehicles can run on nearly anything that burns, offering the prospect of less air pollution than internal combustion engines produce.

Today, the steamers will visit Big Muskie Bucket, and on Friday a drive is planned on some of the back roads in the Wayne National Forest to view covered bridges.

Mike Kelly can be reached at mkelly@mariettatimes.com