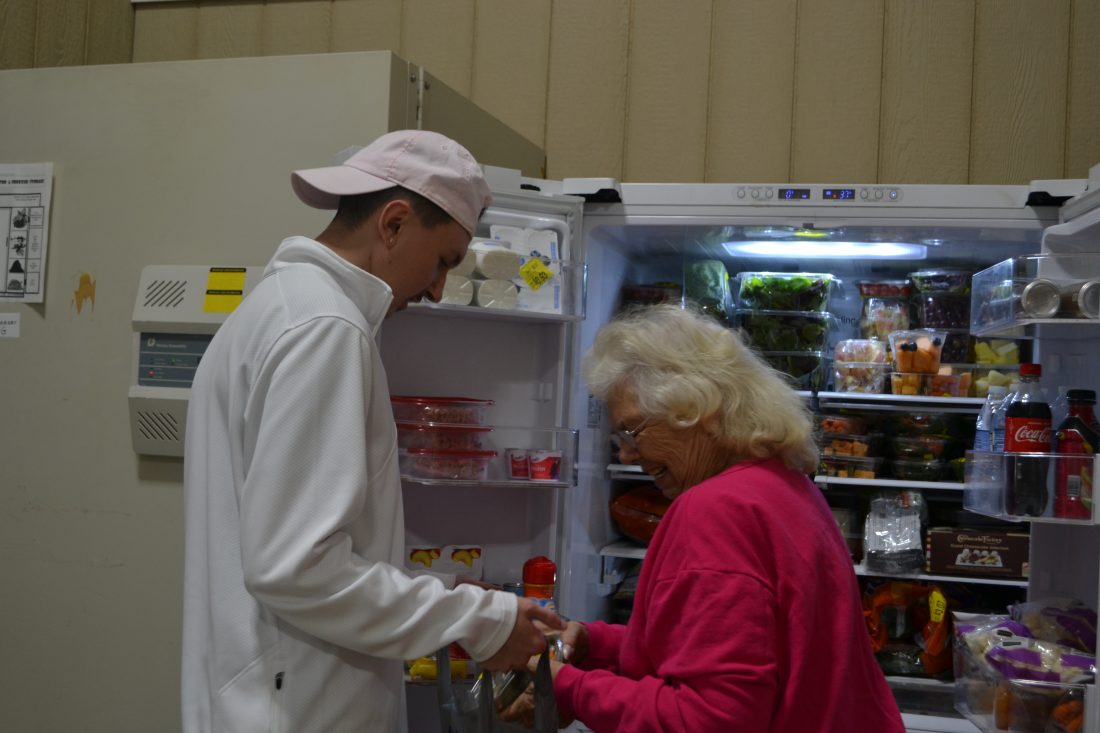 Photo by Michele Newbanks J.T. Hill and Donna Schob fill a bag with fresh fruits and vegetables for a client at the new location of the Greater Marietta Community Food Pantry on Ohio 821.

After 40 years in the same building, the Greater Marietta Community Food Pantry officially opened for business at their new home Tuesday morning.

The food pantry moved from its former location at the First Congregational Church on Front Street in Marietta, to the rear of the Broughton Commercial Properties Complex 1, building 3 on Ohio 821. The facility was formerly used by Rossi Pasta.

As part of the move, the former Marietta Community Food Pantry had to change its name, as it was no longer a part of the church.

“The word ‘greater’ was added in front of that, so we’re a separate corporation now,” said Sherry Hill, pantry director. “It was required in order for us to incorporate. Before this, the food pantry was a mission of the Congregational Church.”

Scott Britton, former pantry director and member of the Congregational Church said the food pantry started out of a Bible study at the church in 1979. This is the food pantry’s 40th anniversary year.

“They were looking for a project to do. Anita Wall came up with a proposal to get food for people who might have a disaster like a fire or flood,” he said. “It started at the church office in bags under the secretary’s desk. It expanded into thousands of people that get assistance every year.”

Hill said the final move out of the church was this past weekend, but they started the relocation process about a month ago. They started looking for a new site a few months ago.

“We had anticipated that it could possibly take a year or two, because there were a few things that were criteria that we had,” Hill said. “It had to be out of the flood plain and it had be zoned for commercial use. We of course wanted approximately three times the square footage.”

She said a huge consideration was that they were within three miles of their old site on Front Street.

“We have a little under 3,000 square feet, which increased our space three-fold,” Hill said. “We have ample parking. Also, the fact that we are handicap accessible is a big plus because some of our clients have disabilities. We don’t have any steps here, and in our old site, we had steps.”

She said the church was an accessible downtown location, but people will still be able to get to the pantry via a CABL bus.

“They have put us on their county bus on Thursdays. They will pick up clients at the courthouse, at the bus stop they have there, bring them out to the pantry and take them back,” she said.

Kenny Vigneron, director of housing and transportation for Washington-Morgan Community Action said the bus is stopping at the pantry starting this Thursday.

“We are using an existing county route which travels by that location. We’re adding a stop,” he said.

“If they want to go there, they will be picked up for the 10:10 a.m. stop so they can be picked up at 10:50 a.m., assuming they are being picked up in Marietta,” Vigneron said. “We come back through there later in the afternoon, but the pantry will already be closed.”

George Broughton, president of Broughton Commercial Properties, said the building at his complex was a good fit for the food pantry’s needs.

“Now they can do it so much better,” he said. “It was our kitchen facility and we converted the back into the food pantry. Before, they were limited because they had no place to store anything.”

He said at his facility, they have a walk-in cooler, plus plenty of space and electrical supply for their many refrigerators.

“We’re excited about it because it’s something we can do for the community,” he added.

Britton said the number of people utilizing the food pantry has fluctuated over the years, but the move was a positive one.

“I think the new opportunity gets the community and the county involved in hunger issues,” he noted. “It’s not just based out of the church, it makes it more of a community-wide effort.”

Now there are more than 30 volunteers who keep the pantry open to 250 families served per month, and approximately 7,000 people per year, Hill said.

“We’re the largest pantry in Washington County,” she added.

Although they are governed by the Southeast Ohio Food Bank and receive 5,000 to 10,000 pounds of food a month, there are still items they are in “desperate” need of, including canned soup and cereal.

“When clients come in, they get a seven to 10 day supply of food,” she said, noting a family can only visit the pantry once a month.

She said the pantry has seen an increase in younger people who don’t have a residence.

“Maybe 10 percent of the people we see don’t have county residency,” Hill noted.

When clients visit, they must have a valid photo ID and proof of their Washington County residency, although “we will serve them if they don’t have proof of residency,” she added.

It isn’t just food that is provided by the pantry. They also get donations of sleeping bags and blankets. The Marietta Kiwanis club donates disposable diapers and the Mid-Ohio Valley United Way donates birthday bags.

“They are gender specific for kids ages 10 and under who have a birthday that month,” Hill explained. The bags contain things like a cake mix, frosting, paper plates and a toy or book.

As part of their food boxes, families are given hygiene products including soap, toilet paper and toothbrushes, which only come through donations, she said. Feminine hygiene products are also available when they are donated.

Hill said they typically see 20 families a day and 10 people had visited the shelter by 11:30 a.m. Tuesday.

“Feeding the hungry is so important,” she added. “People don’t realize how many people don’t have enough to eat.”

• About 250 families receive an emergency food box every month.